Intravascular papillary endothelial hyperplasia (IPEH), commonly known as Masson’s tumor, is a benign lesion that manifests as an excessive proliferation of endothelial cells within a vessel wall. IPEH is extremely rare in the brain, with only 36 intracranial cases previously described in the literature. It is commonly mistaken for more malignant pathologies, such as angiosarcoma. Careful histopathological examination is required for diagnosis, as no clinical or radiographic features are characteristic of this lesion. In this first published case of intracranial IPEH presenting during pregnancy, the authors describe a 32-year-old female with a left frontal intraparenchymal hemorrhage resulting in complete expressive aphasia at 28 weeks 6 days’ gestation. An MRI scan obtained at a local hospital demonstrated an area of enhancement within the hemorrhage. The patient underwent a left frontoparietal craniotomy for hematoma evacuation and gross-total resection (GTR) of an underlying hemorrhagic mass at 29 weeks’ gestation. This case illustrates the importance of multidisciplinary patient care and the feasibility of intervention in the early third trimester with subsequent term delivery. While GTR of IPEH is typically curative, the decision to proceed with surgical treatment of any intracranial lesion in pregnancy must balance maternal stability, gestational age, and suspected pathology. 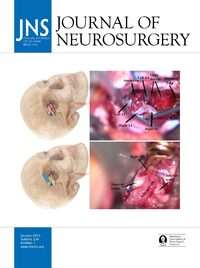