Object. The Glioma Outcomes Project represents a contemporary analysis of the management of malignant (Grade III and Grade IV/GBM) gliomas in North America. This observational database was used to evaluate the influence of resection, as opposed to biopsy, on patient outcome as measured by the length of survival. Attempts were made to reduce the impact of selection bias by repeating the data analysis after omitting patients with major negative prognostic factors.

Methods. Outcome data from 788 patients accrued from multiple sites over a 4-year period (1997–2001) were analyzed with the primary outcome measure being length of survival. Of these, 565 patients with recent diagnoses formed the basis of the present analysis. Patients were systematically followed up until death or up to 24 months after enrollment in the study, and survival data were correlated with the histopathological grade and location of the tumor, the extent of surgery, the patient's performance status, and demographic factors.

The median length of survival was 40.9 weeks for patients with recently diagnosed GBMs. The true median length of survival for patients with Grade III gliomas was not reached, although there was a 58% survival rate at 104 weeks. In multivariate analysis, resection rather than biopsy (p < 0.0001), age 60 years or younger (p < 0.0001), and a Karnofsky Performance Scale (KPS) score of 70 or greater (p = 0.0004) were associated with a prolonged survival time for patients with Grade III or IV gliomas. The prognostic value of resection compared with biopsy was maintained (p < 0.0001), even after eliminating patients considered to be “poor risk” (those with age > 60 years, KPS score < 70, or presence of multifocal tumors), who may have been overrepresented in the biopsy group. Survival “tails” at 24 months were 58% for Grade III gliomas and 11% for GBMs.

Conclusions. These data provide Class II evidence to support tumor grade, patient's age, and patient's functional status as prognostic factors for survival in individuals with recently diagnosed malignant gliomas. Resection (compared with biopsy) is also a strong prognostic factor; however, no quantitative attempt was made to assess the true extent of the resection. 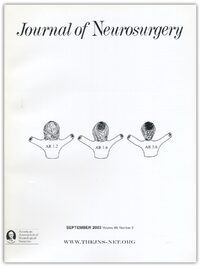