Object. Although a growing number of authors currently advocate surgery to treat low-grade gliomas, controversy still persists, especially because of the risk of inducing neurological sequelae when the tumor is located within eloquent brain areas. Many researchers performing preoperative neurofunctional imaging and intraoperative electrophysiological methods have recently reported on the usefulness of cortical functional mapping. Despite the frequent involvement of subcortical structures by these gliomas, very few investigators have specifically raised the subject of fiber tracking. The authors in this report describe the importance of mapping cortical and subcortical functional regions by using intraoperative realtime direct electrical stimulations during resection of low-grade gliomas.

Methods. Between 1996 and 2001, 103 patients harboring a corticosubcortical low-grade glioma in an eloquent area, with no or only mild deficit, had undergone surgery during which intraoperative electrical mapping of functional cortical sites and subcortical pathways was performed throughout the procedure.

Both eloquent cortical areas and corresponding white fibers were systematically detected and preserved, thus defining the resection boundaries. Despite an 80% rate of immediate postoperative neurological worsening, 94% of patients recovered their preoperative status within 3 months—10% even improved—and then returned to a normal socioprofessional life. Eighty percent of resections were classified as total or subtotal based on control magnetic resonance images.

Conclusions. The use of functional mapping of the white matter together with cortical mapping allowed the authors to optimize the benefit/risk ratio of surgery of low-grade glioma invading eloquent regions. Given that preoperative fiber tracking with the aid of neuroimaging is not yet validated, we used intraoperative real-time cortical and subcortical stimulations as a valuable adjunct to the other mapping methods. 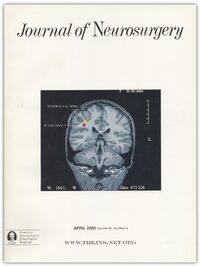