Object. A new experimental model of chronic cerebral hypoperfusion was developed to study the effects of systemic arterial shunting and obstruction of the primary vessel that drains intracranial venous blood on cerebral perfusion pressure (CPP), as well as cerebral pathological changes during restoration of normal perfusion pressure.

Methods. Twenty-four Sprague—Dawley rats were randomly assigned to either a sham-operated group, an arteriovenous fistula (AVF) group, or a model group (eight rats each). The animal model was readied by creating a fistula through an end-to-side anastomosis between the right distal external jugular vein (EJV) and the ispilateral common carotid artery (CCA), followed by ligation of the left vein draining the transverse sinus and bilateral external carotid arteries. Systemic mean arterial pressure (MAP), draining vein pressure (DVP), and CPP were monitored and compared among the three groups preoperatively, immediately postoperatively, and again 90 days later. Following occlusion of the fistula after a 90-day interval, blood—brain barrier (BBB) disruption and water content in the right cortical tissues of the middle cerebral artery territory were confirmed and also quantified with transmission electron microscopy.

Formation of a fistula resulted in significant decreases in MAP and CPP, and a significant increase in DVP in the AVF and model groups. Ninety days later, there were still significant increases in DVP and decreases in CPP in the model group compared with the other groups (p < 0.05). Damage to the BBB and brain edema were noted in animals in the model group during restoration of normal perfusion pressure by occlusion of the fistula. Electron microscopy studies revealed cerebral vasogenic edema and/or hemorrhage in various amounts, which correlated with absent astrocytic foot processes surrounding some cerebral capillaries.

Conclusions. The results demonstrated that an end-to-side anastomosis between the distal EJV and CCA can induce a decrease in CPP, whereas a further chronic state of cerebral hypoperfusion may be caused by venous outflow restriction, which is associated with perfusion pressure breakthrough. This animal model conforms to the basic hemodynamic characteristics of human cerebral arteriovenous malformations. 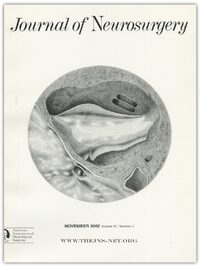