✓ Adjuvant use of 1,3-bis(2-chloroethyl)-1-nitrosourea (BCNU) wafers with surgical resection is becoming common for the treatment of malignant gliomas. Cyst formation in the tumor resection cavity is a recently described complication associated with the use of BCNU wafers. There is currently no report in which successful management of this complication without additional surgical intervention is described.

The authors describe four patients in whom postoperative cysts developed in the tumor resection cavity after placement of BCNU wafers. These include a 38-year-old man with a left frontoparietal tumor, a 48-year-old man with a right frontal lobe tumor, a 78-year-old man with a left parietooccipital tumor, and a 61-year-old woman with a left frontotemporal tumor. Histopathological studies of biopsy samples revealed malignant glioma in each patient. All four patients had unremarkable perioperative courses, were discharged within 3 to 8 days of surgery, and subsequently returned with acute neurological deterioration. Follow-up magnetic resonance (MR) imaging demonstrated cyst formation with significant mass effect at the previous resection site. Three patients were treated with high-dose dexamethasone and returned to their neurological baseline over an 8-day period. The fourth patient improved after surgical drainage and biopsy sampling of the cyst, which revealed no evidence of infection or recurrent tumor, but again sought medical care 2 weeks later with cyst recurrence necessitating high-dose steroid therapy. On MR images at least a 30% reduction in cyst size was demonstrated in all four patients, each of whom remained clinically stable at 2, 6, 6, and 4 months of follow-up review.

Neurosurgeons should be aware of the potential for postoperative cyst formation accompanied by clinically significant mass effect after BCNU wafer implantation, as well as the potential for successful nonsurgical management leading to clinical and radiological improvement. 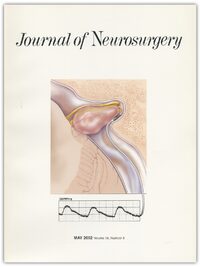