Object. The goal of this study was to investigate the anatomical localization and functional role of human frontal eye fields (FEFs) by comparing findings from two independently conducted studies.

Methods. In the first study, 3-tesla functional magnetic resonance (fMR) imaging was performed in 14 healthy volunteers divided into two groups: the first group executed self-paced voluntary saccades in complete darkness and the second group repeated newly learned or familiar sequences of saccades. In the second study, intracerebral electrical stimulation (IES) was performed in 38 patients with epilepsy prior to surgery, and frontal regions where stimulation induced versive eye movements were identified. These studies showed that two distinct oculomotor areas (OMAs) could be individualized in the region classically corresponding to the FEFs. One OMA was consistently located at the intersection of the superior frontal sulcus with the fundus of the superior portion of the precentral sulcus, and was the OMA in which saccadic eye movements could be the most easily elicited by electrical stimulation. The second OMA was located more laterally, close to the surface of the precentral gyrus. The fMR imaging study and the IES study demonstrated anatomical and stereotactic agreement in the identification of these cortical areas.

Conclusions. These findings indicate that infracentimetric localization of cortical areas can be achieved by measuring the vascular signal with the aid of 3-tesla fMR imaging and that neuroimaging and electrophysiological recording can be used together to obtain a better understanding of the human cortical functional anatomy. 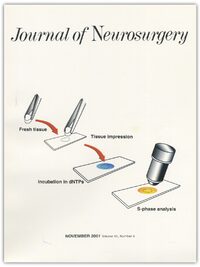