Object. Anterior choroidal artery (AChA) aneurysms account for 4% of all intracranial aneurysms. The surgical approach is similar to that for other supraclinoid carotid artery lesions, but surgery may involve a higher risk of debilitating ischemic complications because of the critical territory supplied by the AChA.

Methods. Between 1968 and 1999, 51 AChA aneurysms in 50 patients were treated using craniotomy and clipping at the Mayo Clinic. There were 22 men (44%) and 28 women (56%) whose average age was 53 years (range 27–79 years). Twenty-four AChA aneurysms (47%) had hemorrhaged; nine patients (18%) had subarachnoid hemorrhage from another aneurysm. Three AChA aneurysms (6%) were associated with symptoms other than rupture. Forty-one patients (82%) achieved a Glasgow Outcome Scale (GOS) score of 4 or 5 at long-term follow up. The surgical mortality rate was 4%, and major surgical morbidity (GOS ≤ 3) was 10%. Eight patients (16%) had clinically and computerized tomography—demonstrated AChA territory infarcts. Five of these strokes manifested in a delayed fashion 6 to 36 hours after the operation, and progressed from mild to complete deficit over hours. In 41 patients the aneurysm arose from the internal carotid artery adjacent to the AChA, and in nine patients the aneurysm arose directly from the origin of the AChA itself; four of these nine patients had postoperative infarction.

Conclusions. Surgical treatment of AChA aneurysms involves a significant risk of debilitating ischemic complications. Most postoperative strokes occur in a delayed fashion, offering a potential therapeutic window. Patients with aneurysms arising from the AChA itself have an extremely high risk for postoperative stroke. 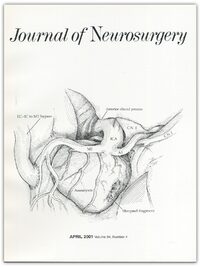