Products of hemolysis in the subarachnoid space inducing spreading ischemia in the cortex and focal necrosis in rats: a model for delayed ischemic neurological deficits after subarachnoid hemorrhage?

Object. The pathogenesis of delayed ischemic neurological deficits after subarachnoid hemorrhage has been related to products of hemolysis. Topical brain superfusion of artificial cerebrospinal fluid (ACSF) containing the hemolysis products K+ and hemoglobin (Hb) was previously shown to induce ischemia in rats. Superimposed on a slow vasospastic reaction, the ischemic events represent spreading depolarizations of the neuronal—glial network that trigger acute vasoconstriction. The purpose of the present study was to investigate whether such spreading ischemias in the cortex lead to brain damage.

Superfusion of ACSF containing Hb combined with either a high concentration of K+ (35 mmol/L, 16 animals) or a low concentration of glucose (0.8 mmol/L, four animals) reduced CBF gradually. Spreading ischemia in the cortex appeared when CBF reached 40 to 70% compared with baseline (which was deemed 100%). This spreading ischemia was characterized by a sharp negative shift in DC, which preceded a steep CBF decrease that was followed by a slow recovery (average duration 60 minutes). In 12 of the surviving 14 animals widespread cortical infarction was observed at the site of the cranial window and neighboring areas in contrast to findings in the three control groups (11 animals).

Conclusions. The authors conclude that subarachnoid Hb combined with either a high K+ or a low glucose concentration leads to widespread necrosis of the cortex. 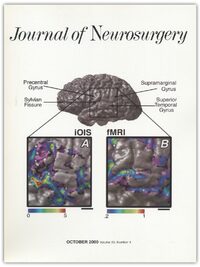