Object. Although the spontaneous occurrence of an unruptured vertebral artery (VA) dissection has increasingly been recognized as a relatively common cause of stroke, and the clinical aspects of this lesion have gradually been determined, its natural course remains obscure. The main goal of this study was to clarify the management protocol for this condition by examining serial angiographic changes in patients with unruptured VA dissections.

Methods. Seventeen patients with unruptured VA dissections, including 13 men and four women, were clinically and angiographically examined between 1993 and 1998. All patients were observed using serial angiography studies. The initial angiography examinations most frequently revealed stenotic lesions (appearance of a pearl-andstring sign or string sign) in eight (47.1%) of 17 cases. In 15 cases (88.2%), changes in the lesions were evident on follow-up angiography studies. Stenotic lesions resulted in occlusion in four cases, normalization in three, and subsequent formation of an aneurysm in one case, which was treated successfully by proximal occlusion of the affected vessel performed using a detachable balloon. Occluded lesions, which were initially observed in three patients, recanalized in two patients and remained unchanged in one patient. Fusiform dilation alone was demonstrated in three patients during the initial angiography session; these lesions became normalized or were unchanged on follow-up studies. Saccular aneurysms were observed in two patients. In one of these cases, proximal ligation of the parent artery was successfully performed because of subsequent aneurysm enlargement. A double lumen, which appeared in one patient with an extradural VA dissection, became occluded. Magnetic resonance T2-weighted imaging studies revealed infarction corresponding to the posterior circulation in seven cases. During long-term observation in this series, good or excellent recovery was obtained in 14 (87.5%) of 16 patients, and moderate or severe disability in two (12.5%); one patient was lost to follow up after the second angiography study.

Conclusions. A follow-up angiography study must be performed during the early stage (within approximately 3 weeks after onset of symptoms) to confirm the formation or enlargement of an aneurysm, because such conditions may be amenable to surgical treatment. Unruptured VA dissection could otherwise be treated and followed conservatively. Although the majority of dissected lesions seem likely to stabilize within a few months, as evidenced on angiography, in some cases a longer observation period is required. 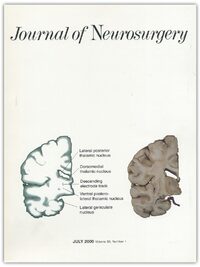