Object. This study was aimed at clarifying the effect of intraoperative hypotensive anesthesia on the outcome of early surgery in patients with subarachnoid hemorrhage (SAH) caused by saccular cerebral aneurysms. Other factors were also screened for possible effects on the outcome.

Methods. Hospital charts in 84 consecutive patients with SAH who underwent aneurysm clipping by Day 4 were examined. Possible factors affecting the outcome were analyzed using multiple logistic regression with the dichotomous Glasgow Outcome Scale score as the outcome variable. The relationship between the intraoperative hypotension and the occurrence and severity of vasospasm was studied using both single- and multivariate analyses.

Conclusions. Intraoperative hypotension had a significantly adverse effect on the outcome of SAH. Hypotension was also related to more frequent and severe manifestations of vasospasm. A long-lasting effect of brain retraction is possibly the cause of this phenomenon. The data contained in this study preclude the use of intraoperative hypo- tension even in a limited form. 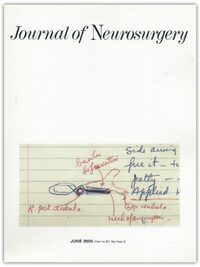