✓ This study describes the relationship between raised intracranial pressure (ICP), hypotension, and outcome from severe head injury. The study is based on information derived from the Traumatic Coma Data Bank where ICP records from a relatively large number of patients were available to help delineate the major factors influencing outcome. From the total data base of 1030 patients, 428 met minimum monitoring duration criteria for inclusion in the present analysis. Outcome was classified according to the Glasgow Outcome Scale score determined at 6 months postinjury. Arrays of comparably defined summary measures describing the patient's course were considered for ICP, blood pressure (BP), central perfusion pressure, and therapy intensity level. For instance, the array of ICP summary descriptors included the proportion of ICP readings greater than x, for x = 0 to 80 mm Hg by increments of 5 mm Hg. A total of 187 candidate summary descriptors were considered. A stepwise ordinal logistic regression was used to select the subset of candidate summary descriptors that best explained the 6-month outcome.

As established previously, age, admission motor score, and abnormal pupils were each highly significant in explaining outcome. Beyond these factors, the proportion of hourly ICP readings greater than 20 mm Hg was next selected and was also highly significant in explaining outcome (p < 0.0001). In addition to the ICP factor, the cutoff point of 20 mm Hg was selected by the procedure as most indicative of outcome. With these four factors modeled, the next selected factor was the proportion of hourly BP readings less than 80 mm Hg. Again, the BP factor was highly significant in explaining outcome (p < 0.0001). As with the ICP factor, the BP cutoff point of 80 mm Hg was objectively selected as most indicative of outcome. In summary, the incidence of mortality and morbidity resulting from severe head trauma is strongly related to raised ICP and hypotension measured during the course of ICP management. Moreover, these ICP and BP factors provide a better indication of outcome than the similarly defined factors of central perfusion pressure or therapy intensity level. 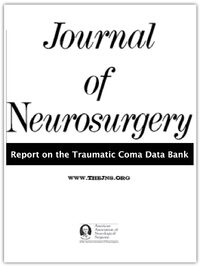