✓ Twenty-six patients (16 male and 10 female) ranging in age from 5 to 68 years underwent suboccipital transcerebellar stereotaxic biopsy of mass lesions situated in the pons. Stereotaxic computerized tomography, magnetic resonance imaging, and angiographic data were obtained while the patient was positioned in an inverted custom stereotaxic head frame. The patients were then placed under general endotracheal anesthesia and positioned prone. Optimal trajectory planning utilized a transcerebellar route directed through the middle cerebellar peduncle, with target and entry points calculated to avoid vascular structures. No complications were encountered in the perioperative period when this technique was used. Histological diagnosis of the lesions revealed: astrocytomas in 14 patients, oligodendroglioma in one, ependymoma in one, arteriovenous malformations in two, radionecrosis in one, cryptococcal abscess in one, demyelinating disease in three, and infarctions in three. No consistent correlation could be made between radiographic characteristics and histological diagnoses.

Empiric treatment of brain-stem lesions without tissue diagnosis based upon the radiological and clinical findings may result in inappropriate therapy administration. Alternatively, open operative procedures to obtain tissue require a visible surface abnormality to guide biopsy, and carry the risks of a major surgical procedure in already compromised patients. For these reasons the authors consider a suboccipital transcerebellar stereotaxic biopsy to be the diagnostic procedure of choice in the assessment of pontine mass lesions. 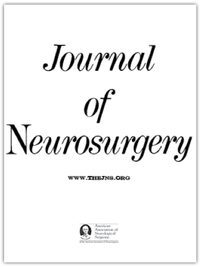