I clearly remember the first meeting of the leadership of the major organizations in neurosurgery. The year was 2010. The city was San Francisco. The occasion was the Annual Meeting of the Congress of Neurological Surgeons (CNS). The location was the San Francisco Marriott Marquis Hotel. At that time, I was President of the American Association of Neurological Surgeons (AANS). In attendance at that meeting was the leadership of the CNS, AANS, Society of Neurological Surgeons (SNS), American Board of Neurological Surgery (ABNS), and the Residency Review Committee of the Accreditation Council of Graduate Medical Education (ACGME). The meeting was chaired by Allan Friedman, President of the SNS. Topics for discussion included “Conflict of Interest Policies,” the “SNS Resident Boot Camp,” “Resident Duty-Hour Standards,” “Neurocritical Care,” and “Quality Guidelines” (Fig. 1). Of these topics, perhaps the most important one was the new standards for resident duty hours that were approved by the ACGME in September 2010, to be implemented in July 2011. It was rather straightforward for all organizations in neurosurgery to rally behind some of the concerns envisioned with the implementation of these new standards, and to determine ways to have our voices heard.

At the first Neurosurgery Summit meeting, I can distinctly remember sensing that the coming together of the “house of neurosurgery” was going to be extremely important in breaking down barriers between organizations, providing current information on strategic planning from each organization, and reaching out to medical education and specialty societies with a unified voice in neurosurgery. As clearly illustrated in the report by Selden et al.,1 the Neurosurgery Summit has grown over time to include the Chair and Executive Director of the Washington Committee, and the President and Research Committee Chair of the American Academy of Neurological Surgery (AAcNS). The key to the success of the One Neurosurgery Summit meetings is the motivation of the leaders of the various neurosurgical organizations to reach consensus and to develop “action plans” that have helped change the face of organized neurosurgery in North America, and beyond. In this regard, the words of Kenneth Blanchard, “None of us is as smart as all of us,” come to mind and underscore the importance of bringing like-minded and dedicated individuals to the same table. In addition to the important role the One Neurosurgery Summit meetings have played in academic neurosurgery orchestrating neurosurgery residency and fellowship training, this group of leaders has been essential in recognizing the critical importance of patient information from clinical outcomes registry data to drive quality, patient safety, and professional certification agendas.

I was delighted to see the inclusion of the AAcNS leadership on the One Neurosurgery Summit roster since 2018. Founded in 1938, the AAcNS has been the neurosurgical organization in which some of the world’s best clinical and research papers are presented at its annual meetings. It may not be surprising, therefore, that the leaders of the AAcNS, especially in recent times, have formed linkages with the SNS and the RC to develop research milestones that are now part of the curriculum of all US neurosurgery residents. In addition, the AAcNS has helped sponsor the AANS Neurosurgery Research and Education Foundation (NREF) research fellowships for the past several years. Interestingly, when Smith et al. examined the funding conversion of NREF-sponsored research awards (i.e., resident Research Fellowships and Young Clinician Investigator Awards) from 1985 to 2014, they showed that $9.8 million allocated to these awardees was converted to $353.9 million in NIH funding, indicating that in-training and early-career NREF grant awardees are an excellent investment with a high multiplicative effect in ultimate NIH funding.2

With significant momentum built up now over the past decade for the One Neurosurgery Summit meetings, it was critical that mechanisms were in place to pivot scheduled in-person meetings to virtual meetings for this group, and for all organizations in neurosurgery for that matter, given the uncertainties imposed by the COVID-19 pandemic.3 Such rapid adaptations have ensured that the important consensus-based efforts of the One Neurosurgery Summit group can continue unabated.

In the future, it will be critical for the One Neurosurgery Summit group of leaders to envision ways to address issues facing many of the surgical specialties including neurosurgery, such as equity, diversity, and inclusion; professionalism in the workplace and at national meetings; and sexual harassment. Despite some improvements in gender-based equity in neurosurgery,4 there is still much more ground to cover to ensure that the best and brightest from the most diverse pool of applicants are attracted to neurosurgery. Across Canadian universities, among 2019 graduates, more than 40% of MD students stated they were publicly humiliated during their training. They also claimed to be victims of offensive sexist, ethnic, and racial remarks.5 In a bold and timely survey questionnaire study by Benzil et al.,6 the authors reported that sexual harassment in neurosurgery occurs across all ages and practice settings, impacting both males and females. Factors associated with sexual harassment included a male dominance, a hierarchical environment, and a permissive environment for such behavior. Solutions to mitigate against sexual harassment espoused by the authors included changing neurosurgery culture, eliminating unconscious bias, promoting zero-tolerance policies, and committing to best practices to enhance diversity.6 In response to the study by Benzil et al., leaders of the ABNS described efforts now employed to identify examiners who use fear, stress, and other negative tactics during the ABNS oral board process to the detriment of the candidates.7

One of the challenges facing all residency programs is the identification of residents who are struggling to reach their milestones despite efforts to remediate using career mentoring, direct oversight, and rotation-specific objectives. The factors underlying poor performance in residency can be complex and multiple, including cognitive deficiency, technical inability, emotional lability, and issues with work-life imbalance, all of which can be stress-related. Indeed, we are in an era in which stress and burnout have been identified as negative factors in the careers of residents and fully-trained neurosurgeons.8 While numerous resources are now available to reduce stress and burnout, and to promote wellness across most universities, residency training programs, hospitals, and within different sectors of organized neurosurgery,9 I look forward to seeing a unified and strategic approach by the One Neurosurgery Summit group to provide guidance and material policies for these latter challenging issues that affect our specialty.

The authors thank Dr. Rutka for his thoughtful and illuminating comments about the role of the One Neurosurgery Summit in advancing education, scientific research, and governance within North American neurological surgery. Dr. Rutka’s recollections and personal involvement in the first steps of the Summit’s work add welcome color and depth to the materials reported in our article. In particular, he adds important detail regarding the expanding role of the AAcNS in coordinating neurosurgical research funding and training efforts through intersocietal cooperation at the Summit. Emblematic of this focus, the AAcNS is the only organization to send a non-officer representative to Summit meetings: the AAcNS Research Committee Chair.

As Dr. Rutka points out, diversity, equity, and inclusion in terms of both gender and race are currently critical areas of focus and improvement for all professions, including neurosurgery. Underrepresentation of women in neurological surgery has been a long-standing challenge.1 Women in Neurosurgery (WINS) was founded in 1990 to advance the role of women in the profession. In October and November of 2013, the CNS and the AANS, respectively, approved WINS as their newest jointly sponsored section and the first joint section not organized around a technical neurosurgical subspecialty. In addition to providing scientific content, WINS provides mentorship for early-career women in neurological surgery as well as leadership development. The SNS has devoted portions of its 2019 and 2020 annual meetings to the topic of gender discrimination and diversity. In April 2019, in response to the #MeToo movement, the Neurosurgery Summit organizations empaneled a professionalism task force, principally charged with creating a safe and respectful environment at all neurosurgical meetings and educational courses that fall under the purview of our professional organizations. A white paper reporting on the incidence of sexual harassment in neurosurgery was published in November 2020.2 The One Neurosurgery Summit Professionalism and Harassment Policy was approved in the same month, providing a model standard and guideline for organization-level harassment policies, which each Summit group is introducing at the time of this writing. The model standard and guideline, which will also be disseminated in the neurosurgical literature, calls for widespread dissemination of these policies as well as their posting at all professional meetings and educational events.3 Finally, the Summit organizations actively utilize professionalism as a mandatory criterion for participation in leadership, teaching, and examination (M. Grady, President, SNS, immediate Past-President, AAcNS, personal communication, May 2020).4–6

Equitable representation in neurological surgery and its leadership has also been a long-standing concern. In 2016, the SNS devoted a portion of its regular Saturday professional development seminar to the topic of diversity, equity, and inclusion in neurological surgery. In May of 2020, the same professional development forum was to have hosted an interactive seminar on unconscious bias for educational leaders, which was rescheduled to May of 2021 due to the COVID-19 pandemic. The AANS and CNS news publications and peer-reviewed journals have disseminated data on the participation of underrepresented groups in our profession, related policy discussions, and calls to action.1,7–9 On June 1, 2020, the SNS issued a statement decrying the death of George Floyd while in the custody of police. The other Summit organizations issued similarly strong statements a day or two later.10 Over the ensuing months, the CNS hosted a very well-attended series of three webinars on racism, bias, and diversity in medicine and neurosurgery.11 The Summit organizations have also incorporated considerations of equity and inclusion into all decisions about membership and leadership roles.

In his comments, Dr. Rutka also elevates what is clearly the other overriding issue in medicine today, including neurosurgery: burnout and wellness. In 2016 and 2019, the SNS Saturday professional development seminars addressed burnout and suicide, parental leave, and wellness initiatives for residency training. A keynote address at the SNS 2019 Annual Meeting also addressed burnout, resilience, and wellness. In 2017, under the leadership of an SNS Past-President and Neurological Surgery Review Committee Chair, the ACGME incorporated wellness standards into revised duty-hour regulations for all specialties.12 Finally, neurosurgery’s 2018 Milestones 2.0 revision included a “Professionalism: well-being” subcompetency to acknowledge the importance of wellness work as a personal imperative for all trainees, preparing them for resilience and balance during independent practice.13 The SNS junior resident courses in the spring of 2021 (again, being held virtually) will incorporate wellness topics for the first time. The CNS has launched a wellness committee for residents and practicing surgeons and compiled various neurosurgical and other resources at its member website.14 Again, both the CNS and AANS have addressed these topics in their member-focused and peer-reviewed publications.15–17

At their first meeting in 2010, the Neurosurgery Summit organizations discussed their policies related to the avoidance of conflict of interest in professional relationships with the medical device industry (see Rutka, Fig. 1). It is appropriate that more recent Summit meetings reflect a greatly broadened interest in neurosurgical professionalism, including requiring respectful and inclusive treatment of colleagues, combating racism and gender bias, and promoting balance and wellness. The Summit organizations are now clearly focused not just on what we do as neurosurgeons, but also on how we do it. Medicine cannot achieve excellence unless it is delivered by ethical professionals in an inclusive, equitable, and sustainable manner. As Dr. Rutka notes, much work remains to be done and significant obstacles must be overcome. The One Neurosurgery Summit and its member organizations will significantly influence the pace and effectiveness of progress. We are confident, however, that neurosurgery as a profession will rise to the challenge.

We wish to acknowledge Shirley McCartney, PhD, for editorial assistance and manuscript processing.

Agenda from the first Neurosurgery Summit meeting held Sunday, October 17, 2010, on the occasion of the CNS Annual Meeting in San Francisco. Figure is available in color online only. 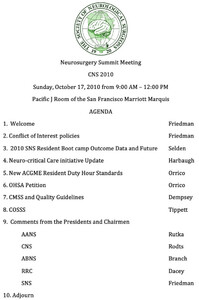