Washington Committee for Neurological Surgery: the evolution of neurosurgery’s involvement in public policy

Origin of the Washington Committee for Neurological Surgery

Medicare legislation in 1965 marked the beginning of the era of federal oversight of health care policy in the United States. Emerging federal regulation raised concern among neurosurgeons over the changes legislation brought to medical practice. In response, the American Association of Neurological Surgeons (AANS) and the Congress of Neurological Surgeons (CNS) created a Joint Socioeconomic Committee (JSEC) and an advisory Council of State Neurosurgical Societies (CSNS) to jointly monitor, report, and recommend action to the parent sponsoring organizations.1 Yet another step was necessary to transform policy objectives, resolutions, and recommendations into effective political action.

The organizations that were traditionally active politically—the American Medical Association (AMA) and the American College of Surgeons (ACS)—represented physicians and surgeons broadly in Washington, DC, but not on issues of unique interest to neurosurgeons, such as neurological research funding at the National Institutes of Health (NIH). In 1975, the AANS and CNS sought a professional lobbyist in Washington, DC, to represent neurosurgeons’ interests. Four pioneer neurosurgeons—Louis A. Finney, MD; Donald H. Stewart Jr, MD; Russell H. Patterson, MD; and Charles A. Fager, MD—found an experienced former US Senate administrative assistant, Charles L. Plante. In 1976, the AANS and CNS contracted for his service as a part-time political lobbyist, and opened a Washington office. At the same time, at Mr Plante’s insistence, the AANS and CNS also jointly appointed a 6-member Washington Committee, composed of 3 senior AANS and 3 senior CNS members who had access to their organizations’ leadership and governing bodies (Figure 1).

The issues these neurosurgeons considered important in 1975 were “national health insurance, the malpractice crisis, the National Institutes for Health (NIH) support for science, and medical manpower reform.“2 However, “as a result of expanding government control over health care, the committee’s agenda…vastly expanded to include nearly all health policy issues that either directly or indirectly affect neurosurgeons and neurosurgical practice.”1

As the issues considered by the Washington Committee steadily expanded over the years, so did the size of the committee, the staff for operations, and the cost to the AANS and CNS. Katie O. Orrico joined Mr Plante as a staff assistant. After earning a law degree while working full time, she was appointed to replace Mr Plante upon his retirement in 1997. The AANS and CNS also decided to establish a full-time Washington Office, and Ms Orrico was appointed director of the new Washington Office, with a staff of 2 additional employees. The cost grew from $12 000 per year in 1976 to $150 000 per year in 1990, then stepwise to $1.9 million by 20213 as new employees were added to handle a growing load and variety of political or practice advocacy issues.4 New staff positions were created and funded in 1999 (Senior Manager for Regulatory Affairs to oversee Current Procedural Terminology (CPT) coding and reimbursement and other regulatory issues); 2006 (Senior Manager for Quality Improvement and Research for quality-related policy issues, clinical practice guidelines review, and biomedical research); and 2009 (Senior Manager for Communications; Figures 2 and 3).

The growth of the Washington Committee paralleled the passage of new Medicare legislation by Congress and the creation of new Medicare and Medicaid regulation by the Health Care Finance Administration (HCFA: 1977-2001) and its successor agency, the Centers for Medicare & Medicaid Services (CMS)—a division of the US Department of Health and Human Services (HHS).

Medicare physician payment, which had risen on average 13% per year from 1965 to 1988, became the target of federal cost control.5 Congress adopted a Medicare Physician Fee Schedule (MPFS) in the 1989 Omnibus Budget Reconciliation Act (OBRA 89, Public Law 101-239), based on a Resource-Based Relative Value Scale (RBRVS) devised by William C. Hsiao at Harvard University.6 The MPFS—which began operation in January 1992—preserved physician fee-for-service reimbursement, but shifted it from a modified charge-basis to a standardized national payment scale. The fee schedule was constructed on value cross-references between different specialties7using estimates of work effort (wRVUs), practice expenses (peRVUs), and malpractice expenses (malRVUs), all added together to produce a total relative value (total RVUs), converted to a cash value by an annually determined monetary conversion factor (CF).8 The MPFS was intended not only to limit Medicare costs, but to redistribute payments from surgeons (proceduralists), considered overpaid, to primary care physicians, considered underpaid. In addition, the fee schedule was designed for adoption by private health insurance payers to spread the fee standardization and specialty payment redistribution to the private healthcare sector.

Along with payment control, Congress assumed interest in the quality of medical and surgical care provided, and opened the door to government oversight of the quality of physician and hospital care, for which it paid.9 The original 1982 TEFRA-enabling legislation also established a Quality Improvement Organization Program (QIO) to contract with nongovernmental organizations to carry out quality monitoring for the Medicare program.

Numerous nongovernmental organizations sprang up to fill the newly created need to define, measure, and monitor the quality of medical care. These organizations included the NCQA (National Committee for Quality Assurance) in 1990, the Institute for Healthcare Improvement (IHI) in 1991, the National Quality Forum (NQF) in 1999, the AMA Physician Consortium for Performance Improvement (PCPI) in 2000, the industry-led Leapfrog Group in 2000, the Hospital Quality Alliance (HQA) in 2002, and the Surgical Quality Alliance (SQA—ACS) in 2005. The influence of these organizational changes prompted the Washington Committee to add quality improvement policies to those it routinely monitored.

Other policy topics that took on larger influence and became part of the Washington Committee organizational structure and action planning were new approaches to federal medical liability reform, Food and Drug Administration (FDA) policies and procedures—particularly for medical device approvals, graduate medical education (GME) funding through Medicare, and regionalization of the delivery of trauma and emergency services.

Subcommittee Addition to the Washington Committee

In 2000, the AANS and CNS representatives to the AMA CPT Editorial Panel and the AMA/Specialty Society RVS Update Committee (RUC) were brought into a single committee structure, the Coding and Reimbursement Committee. This was the first step in bringing the diverse and disseminated political and public policy efforts of the AANS and CNS under a single coordinating organizational body, the Washington Committee. Prior to 2000, these responsibilities had been performed by voluntary neurosurgeons who, though extremely knowledgeable and influential in their own right, largely functioned free of organizational oversight or coordination. The AANS and CNS relied on their personal judgment, dedication, and time-sacrifice to protect the interests of all their colleagues. Byron “Cone” Pevehouse, MD, was the original neurosurgical CPT master, gifted with an eidetic memory and having worked on the original neurosurgical AMA CPT codes (61000-64999).10 After the AMA RUC was established to add or revise Medicare payment values to CPT codes,11 Robert E. Florin, MD, served as neurosurgery’s representative on the 31 member multispecialty panel, before passing on his experience and knowledge to a successor group within the fledgling Coding and Reimbursement Committee in 2001 to 2002. Gregory J. Przybylski, MD, replaced Dr Florin on the RUC, where he served from 2002 to 2018. G. Edward Vates, MD, currently serves as neurosurgery’s representative on the RUC.

The CPT Editorial Panel is composed of a variety of medical specialists recommended by specialty societies and appointed by the AMA Board of Trustees.12 Unlike the RUC, no specialty has an assigned seat on the panel. Neurosurgeons who have served on the Editorial Panel include Dr Pevehouse; Samuel J. Hassenbusch III, MD, PhD; Jeffrey W. Cozzens, MD; and most recently R. Patrick Jacob, MD—whose term ended in 2018. The Coding and Reimbursement Committee includes neurosurgery advisors to both the RUC and the CPT panel, who periodically present and justify proposals for new and revised CPT codes to the CPT Editorial Panel and for RVU valuation to the RUC. The coordination of CPT and RUC activities within a subcommittee of the Washington Committee allowed neurosurgery to more effectively advance the specialty’s Medicare payment policy advocacy goals (Figure 4).

Composition of the Washington Committee

The Washington Committee size grew further with the addition of a liaison from the Society of Neurological Surgeons (SNS) in 2000; a single AMA delegate and a Health Policy expert (Dr John Kusske) in 2004; an AANS/ACS Health Policy Fellow, a Young Neurosurgeons Committee liaison, and a NERVES liaison (Neurosurgery Executives’ Resource Value & Education Society—a practice managers’ organization established through the CSNS in 2002)13 in 2005; the American College of Surgeons Board Regent representing neurosurgery and the newly appointed Neurosurgery PAC chair in 2006; a CSNS resident fellow in 2009; a CNS guidelines coordinator and an AANS Neuropoint Alliance liaison in 2011; and finally an American Board of Neurological Surgery (ABNS) liaison in 2015. With the addition of a liaison from Women in Neurosurgery in 2019, the current number of Washington Committee invitees is 35.

Although the Washington Committee was established for neurosurgery to pursue its own advocacy agenda in Washington, DC, the power to persuade politically grows with the size of the advocacy group. Neurosurgeons are numerically a small constituency, constituting about 4000 + actively practicing members in the AANS and CNS. To magnify lobbying efforts, it became evident that neurosurgery often would benefit from a joint lobbying strategy.

Political persuasion is strengthened by coalitions. Coalitions are special interest groups with different constituencies united temporarily over a common cause. The objective of collective lobbying is to focus on issues that individual professional organizations share in common and to undertake a unified lobbying strategy for that single issue. All physicians share some issues, and for these the AMA is a most effective lobbying partner. However, some issues are divisive among different specialties, such as Medicare evaluation and management (E/M) CPT code valuation vs procedural CPT codes, where increase in payment for cognitive services requires a decrease in payment for surgical procedures, based on Medicare’s “budget neutrality” rule. The AANS and CNS participate in more than a dozen coalitions. The most prominent coalition partners are the Alliance of Specialty Medicine, the Surgical Care Coalition, the Health Coalition on Liability and Access, the Physician Clinical Registry Coalition, and the Regulatory Relief Coalition. Temporary issue-specific coalitions are often formed and disbanded after the issue is resolved or specific proposed legislation (or regulation) is passed or defeated.

Importance of the Washington Committee

The Washington Committee—with its political surveillance and direct intervention capability; with its broad representation and connection with every governing, oversight, or representative national neurosurgical organization; and with the significance of its actions affecting every aspect of neurosurgical practice—has grown steadily in importance since 1997, when the Washington Office became a full-time operation. Whether the issue is reimbursement, preauthorization, quality improvement, resident training, federal research support, the health care delivery system, or any of a host of other challenges, the effects penetrate to every organization in the neurosurgical domain. Although each member or liaison of the Washington Committee represents a separate and unique realm of professional responsibility, all are united by an ultimate accountability of the neurosurgical specialty to public governance. The rules of public governance, law and regulation, require the specialty’s perspective to offer the public its best service. The power of each component neurosurgical organization to help mold public policy is magnified by access to the expertise and resources of all the others, but particularly to the direct federal lobbying capability of the AANS/CNS Washington Office.

Not only does all policy affecting neurosurgical training, innovation, and practice funnel in some form through the Washington Committee, but it has become the de facto training and proving ground for young neurosurgeons heading into neurosurgical leadership positions. Hippocrates is credited with saying in 460 BCE, “He who wishes to be a surgeon should go to war.”15 Today, the neurosurgeon who would lead should experience the Washington Committee.

The authors have no personal, financial, or institutional interest in any of the drugs, materials, or devices described in this article.

This study did not receive any funding or financial support.

This article has been published jointly by both Neurosurgery and the Journal of Neurosurgery. 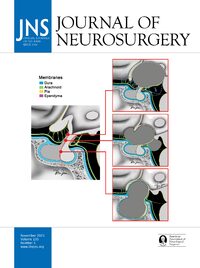 Photo: Katie O. Orrico, Washington Office Director (1997-). Consent was granted for publication of this image. Figure is available in color online only.

Washington Committee logo. Figure is available in color online only.

Washington Committee structure and accountability diagram. Figure is available in color online only. 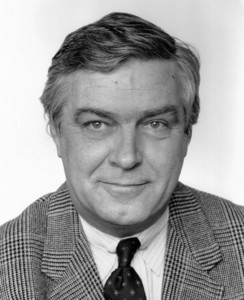 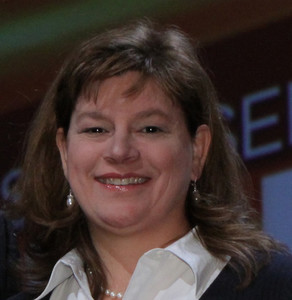 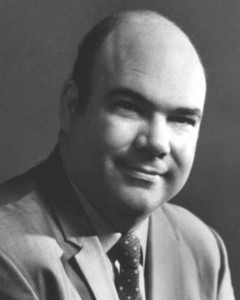 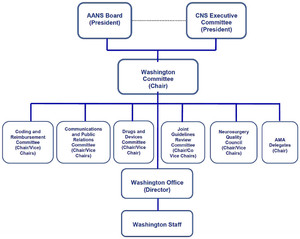