Introduction. A meeting filled with superlatives

The 19th International Leksell Gamma Knife Society (LGKS) Meeting was held in Dubai from March 4 to 8, 2018. Dubai is the most populated city in the United Arab Emirates. The city exhibits a global perspective as it serves as a major business and transportation hub. It is also a city of superlatives with the world’s tallest building, the Burj Khalifa, at a height of 2722 feet, and the Dubai Airport, the world’s largest and busiest for international travel. Even more remarkable is the 22,500-m2 indoor ski resort that resides within this Middle East city.

The Gamma Knife has its own fair share of superlatives. It is frequently considered the most accurate and precise intracranial radiosurgical platform. The device has been used to treat more than 1 million patients worldwide and, thus, is the most frequently used dedicated device for intracranial stereotactic radiosurgery. Elekta, the device’s manufacturer, recently noted the 50th anniversary of the first patient to be treated with the Leksell Gamma Knife in a clinical setting, with the patient undergoing radiosurgery for a pituitary adenoma at Sophiahemmet Hospital in Stockholm on January 27, 1968.1

Highlights of the Gamma Knife meeting included lectures on the molecular biology of tumor growth and invasion, hypofractionated radiosurgery, medical physics, and the interface between immunotherapy and radiosurgery. Radiosurgical indications that were the subject of focused discussion included large brain metastases, arteriovenous malformations, behavioral disorders, temporal lobe epilepsy, tumors of the orbit, aneurysms, and benign tumors. The LGKS has also been focusing efforts on standardization in terminology, contouring, and treatment planning. Additionally, there was a session for young clinicians and investigators in the field of Gamma Knife radiosurgery.

The current supplement comprises superlative works presented at the LGKS Meeting. Special gratitude is extended to a respected group of Gamma Knife users who provided peer review for all of the submissions to the Journal of Neurosurgery supplement.

The next stop for the Leksell Gamma Knife Society is a joint meeting with the International Stereotactic Radiosurgery Society (ISRS) in Brazil next year. 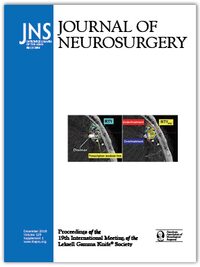