Tumors with cavernous sinus (CS) invasion represent a neurosurgical challenge. Increasing application of the endoscopic endonasal approach (EEA) requires a thorough understanding of the CS anatomy from an endonasal perspective. In this study, the authors aimed to develop a surgical anatomy–based classification of the CS and establish its utility for preoperative surgical planning and intraoperative guidance in adenoma surgery.

Twenty-five colored silicon–injected human head specimens were used for endonasal and transcranial dissections of the CS. Pre- and postoperative MRI studies of 98 patients with pituitary adenoma with intraoperatively confirmed CS invasion were analyzed.

Tumors with cavernous sinus (CS) invasion represent a neurosurgical challenge. Increasing application of the endoscopic endonasal approach (EEA) requires a thorough understanding of the CS anatomy from an endonasal perspective. In this study, the authors aimed to develop a surgical anatomy–based classification of the CS and establish its utility for preoperative surgical planning and intraoperative guidance in adenoma surgery.

Twenty-five colored silicon–injected human head specimens were used for endonasal and transcranial dissections of the CS. Pre- and postoperative MRI studies of 98 patients with pituitary adenoma with intraoperatively confirmed CS invasion were analyzed. 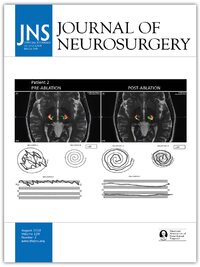 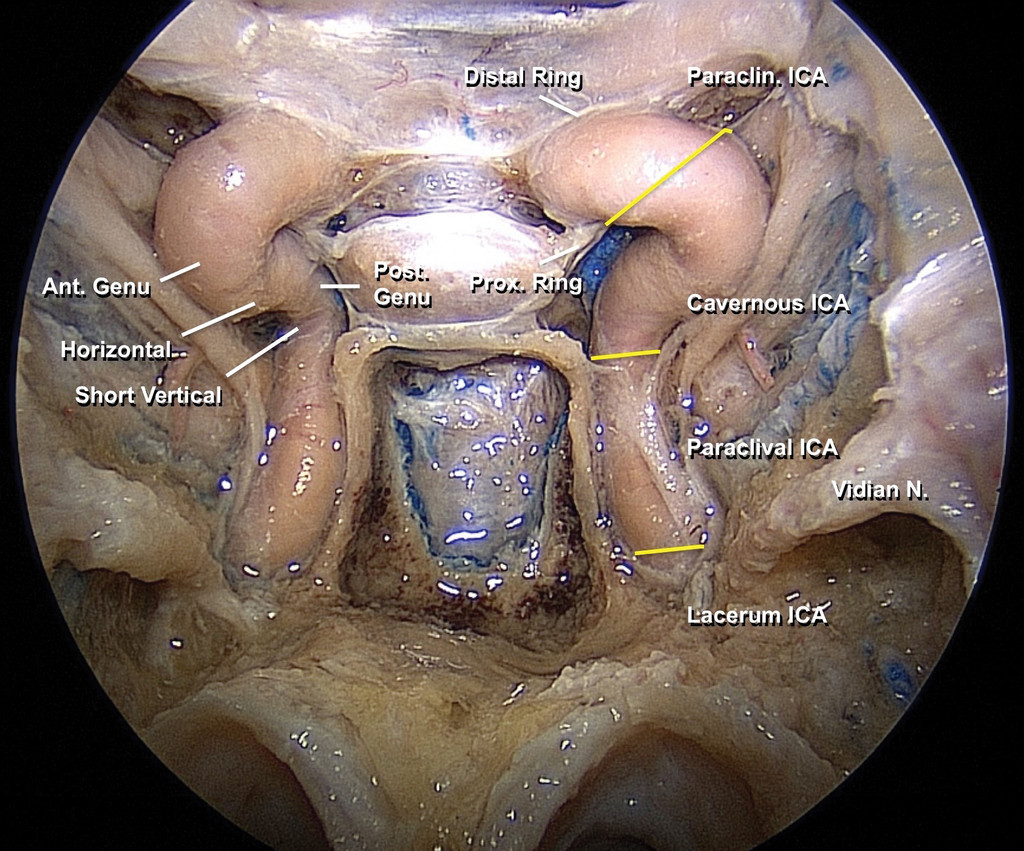 Representation of the segments of the ICA. The parasellar ICA is divided into cavernous and paraclinoidal (Paraclin.) segments. Cavernous ICA subsegments from proximal to distal are: short vertical (continuation of paraclival ICA), horizontal, and anterior genu (Ant. Genu). The posterior (Post.) genu marks the transition between the short vertical and the horizontal segments of the cavernous ICA. The paraclinoidal ICA is a continuation of the anterior genu of the cavernous ICA and is within the clinoidal triangle in the roof of the CS; proximal (Prox.) and distal dural rings demarcate its extent. The yellow lines from caudal to rostral define the boundaries of the paraclival, cavernous, and paraclinoidal ICA. The vidian nerve (N.) can be followed to the lacerum ICA. 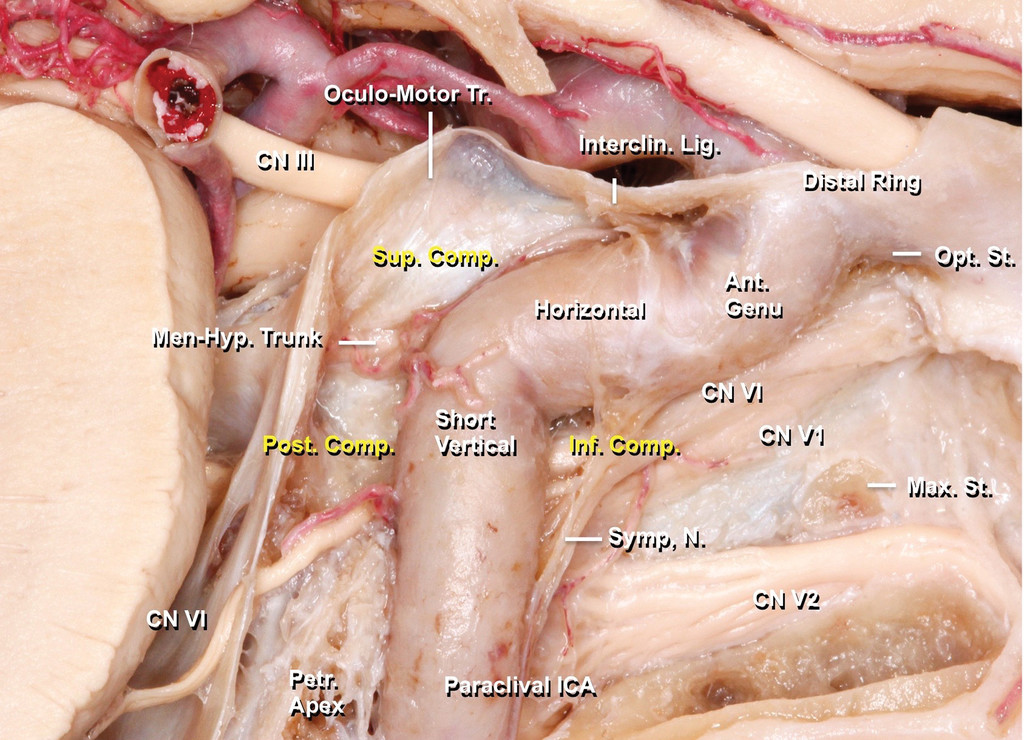 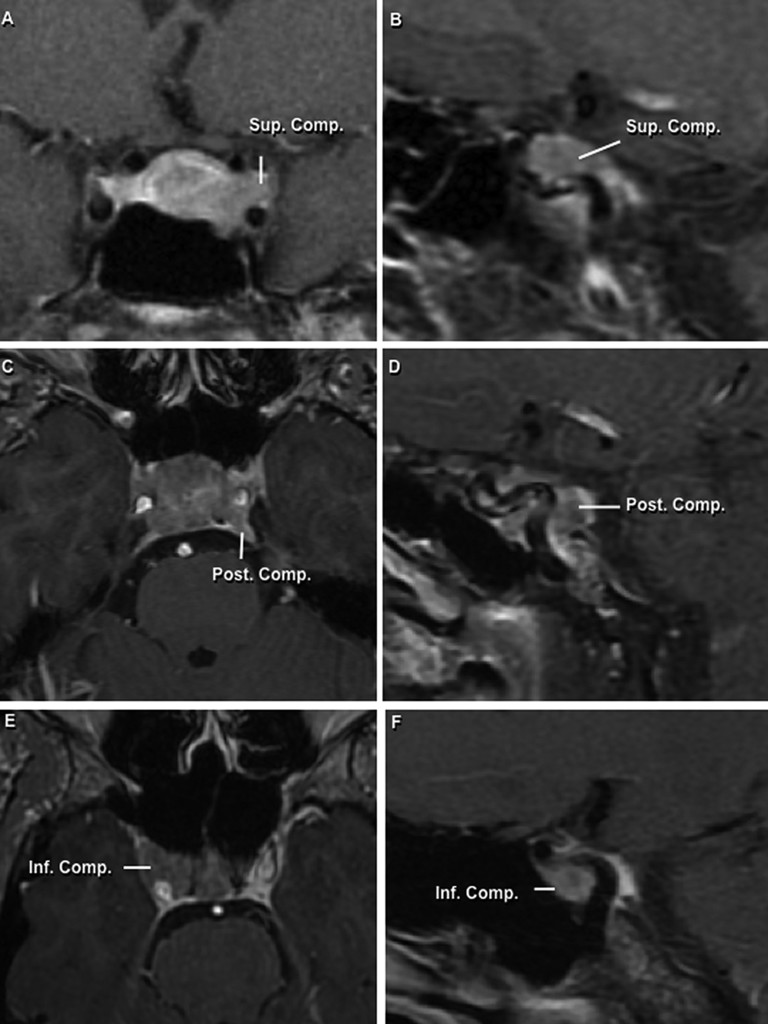 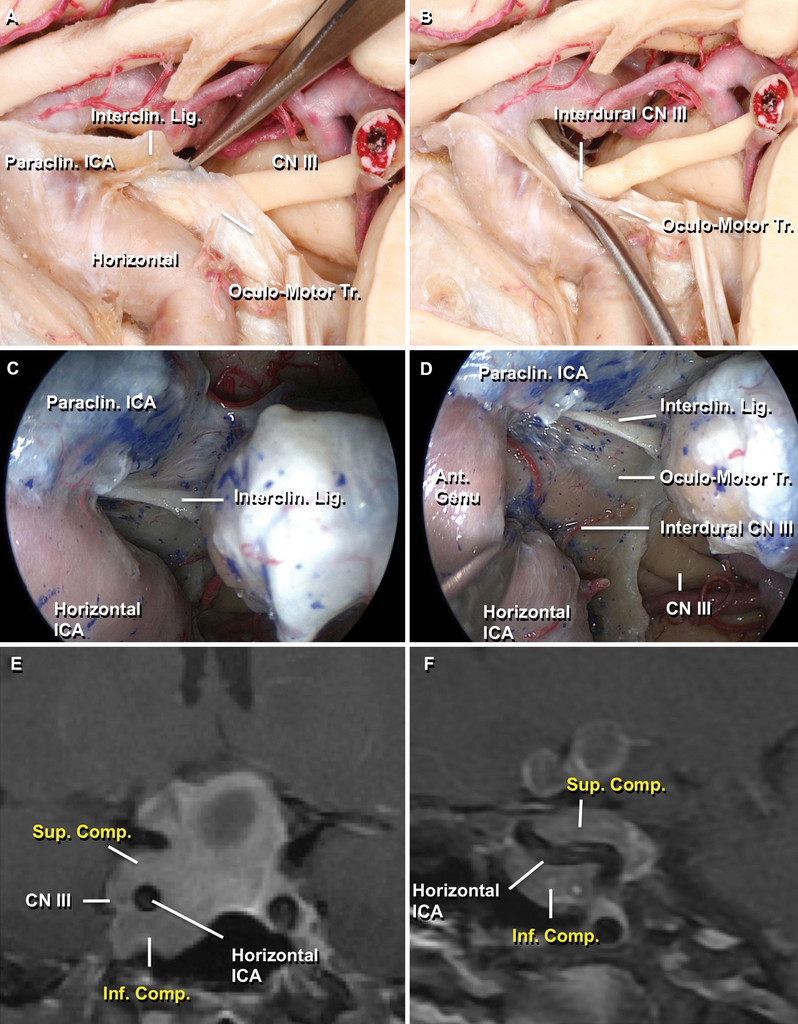 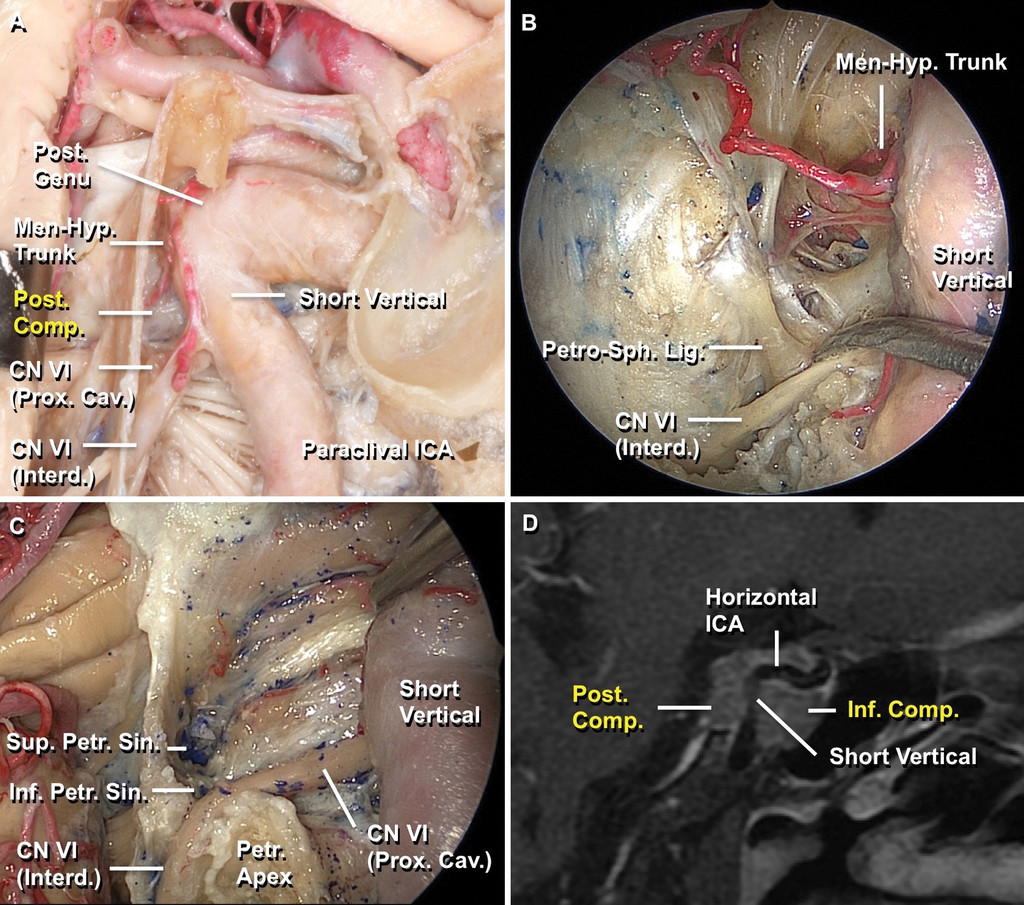 Neurovascular relationships in the posterior compartment (Post. Comp.). A: The posterior compartment is located posterior to the short vertical cavernous ICA and anterior to the lateral petroclival dura forming the posterior wall of the CS. The posterior (Post.) ICA genu marks the transition between the superior and posterior compartments. The meningohypophyseal trunk (Men-Hyp.) is seen arising from the posterior wall of the posterior genu of the ICA at this transitional level. Note the intimate relationship of this compartment to the abducens nerve (CN VI). The interdural (Interd.) or inferior petrosal segment can be seen. Prox. Cav. = proximal cavernous. B: The gulfar or superior petrosal segment (below the dissector and above the petrous apex) of CN VI is located at the most inferior portion of this compartment as it passes under the petro-sphenoidal (Petro-Sph.) ligament to enter the CS. C: Note the location of the gulfar segment of CN VI above the petrous (Petr.) apex. The proximal cavernous segment of CN VI, usually not visible from this angle due to its paracarotid location, can be seen due to forward mobilization of the short vertical ICA. The nerve sits at the confluence of the inferior (Inf.) and superior (Sup.) petrosal sinuses (Petr. Sin.). D: A case example (sagittal MR image) shows evidence of a pituitary adenoma with extension into the posterior and inferior compartments. Note the presence of the tumor in relation to the short vertical segment of the ICA. 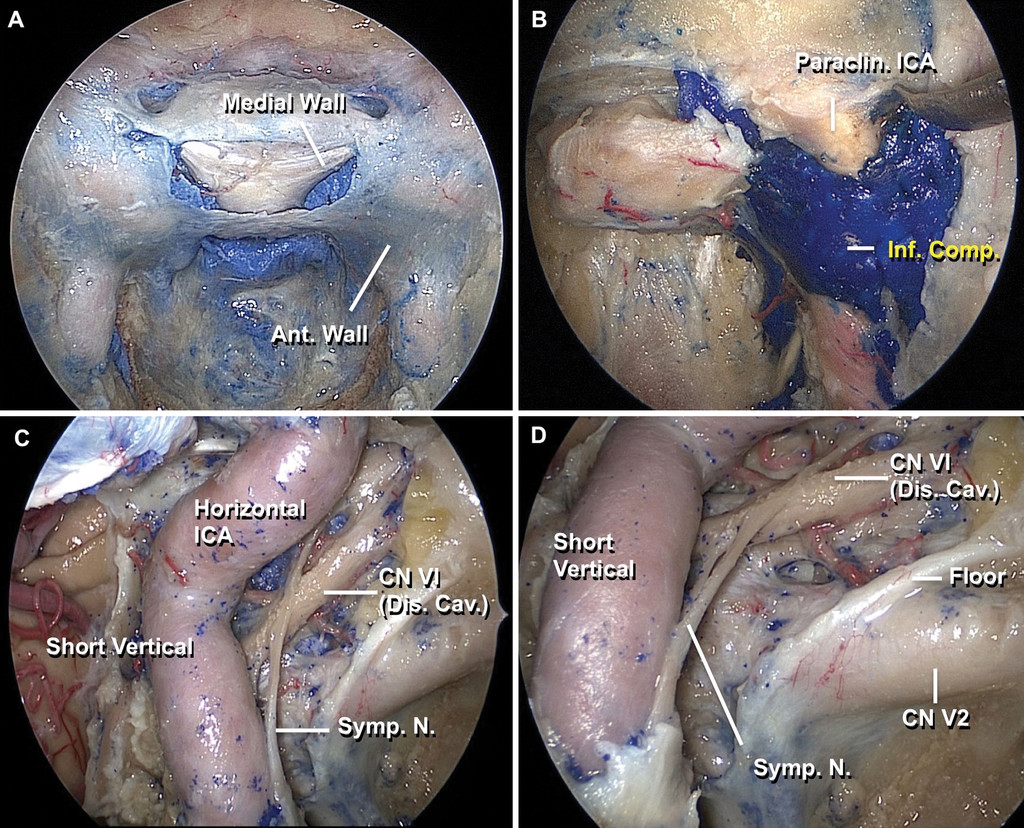 Neurovascular relationships in the inferior compartment (Inf. Comp.). A: The anterior (Ant.) wall of the CS is continuous with the periosteal layer of the dura surrounding the pituitary gland, while the medial wall is continuous with the meningeal layer surrounding the gland. The medial wall attaches to the carotid via the caroticoclinoidal ligament. Note the blue silicone representing the CS. B: Note the location of the paraclinoidal (Paraclin.) ICA at the roof of the CS. The inferior compartment can be seen. C: Medial view of the left CS. The inferior compartment is located inferior to the horizontal and anterior genu subsegments of the ICA and anterior to the short vertical segment. The sympathetic nerve (Symp. N.) or plexus is located around the ICA with the distal cavernous (Dis. Cav.) segment of the abducens nerve (CN VI), inferolateral to the horizontal ICA. Note the oblique trajectory of the sympathetic nerve compared with the horizontal trajectory of CN VI. D: The dural floor of the CS denotes the transition from the parasellar region dura to the middle cranial fossa dura. Note that the maxillary nerve (CN V2) is outside the dural envelope surrounding the CS, and therefore is not part of the CS. 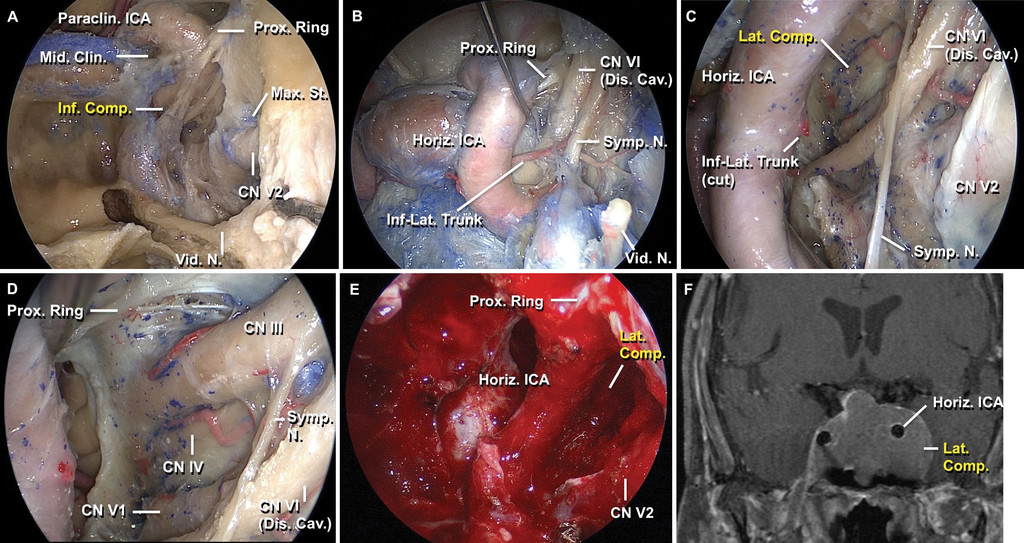 Neurovascular relationships in the lateral compartment (Lat. Comp.). A: The upper limit of this compartment is formed by the proximal (Prox.) dural ring that covers the inferior surface of the optic strut. The maxillary strut (Max. St.) separates the superior orbital fissure from the foramen rotundum and marks the inferior limit of the lateral compartment along with the V2 prominence. The optic and maxillary struts are ideal landmarks for the superior and inferior extent of the exposure, respectively. The dura is opened in front of the anterior genu of the ICA starting from the inferior compartment (Inf. Comp.) and advancing superiorly and anteriorly. Mid. Clin. = middle clinoid; Paraclin. = paraclinoidal; Vid. N. = vidian nerve. B: The arterial branches of the inferolateral (Inf-Lat.) trunk can be identified running from medial to lateral where they distribute along the lateral wall of the CS. To mobilize (from lateral to medial) the horizontal (Horiz.) cavernous ICA, the lateral aspect of the proximal (Prox.) ring (extending between the paraclinoidal ICA and lower aspect of the optic strut) requires partial sectioning. Dis. Cav. = distal cavernous; Symp. N. = sympathetic nerve. C: The inferolateral trunk has been transected to facilitate access to the lateral compartment. D: This compartment contains the third and fourth CNs and the first division of the trigeminal nerve, which are located at the lateral wall of the CS. The distal cavernous segment of the abducens nerve is located at the transition between inferior and lateral compartments. E: Intraoperative view of the case shown in panel F. Tumor from the lateral compartment has been removed by extending the exposure from the proximal dural ring to V2 to gently mobilize the horizontal ICA. F: Coronal MRI showing invasion of all CS compartments. 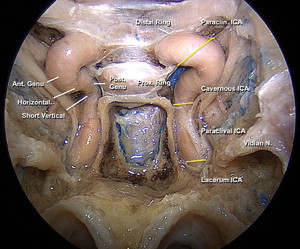 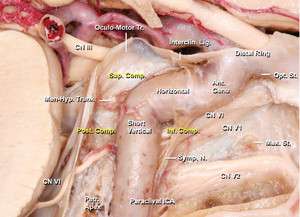 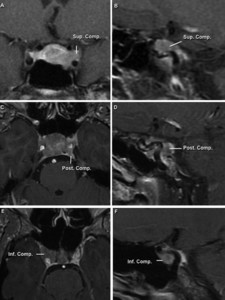 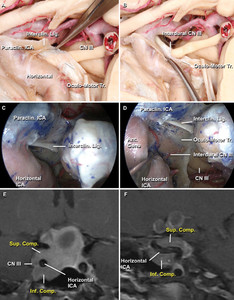 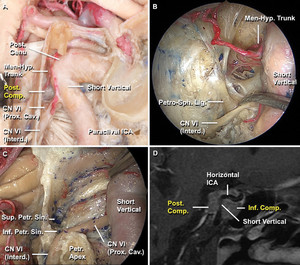 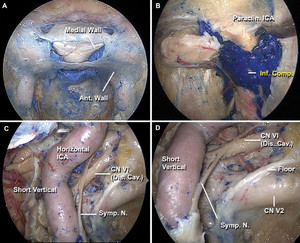 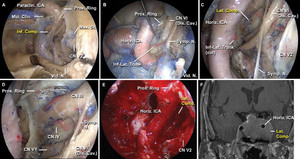