A retrospective review of patient records from 1998 to 2015 identified a total of 942 patients with TN and 500 patients who underwent MVD. After excluding several cases, 306 patients underwent MVD as their first surgical intervention and 175 patients underwent subsequent MVD. Demographics and clinicopathological data and outcomes were obtained for analysis.

A retrospective review of patient records from 1998 to 2015 identified a total of 942 patients with TN and 500 patients who underwent MVD. After excluding several cases, 306 patients underwent MVD as their first surgical intervention and 175 patients underwent subsequent MVD. Demographics and clinicopathological data and outcomes were obtained for analysis.

Trigeminal neuralgia (TN) is a disorder characterized by intermittent, paroxysmal, lancinating pain along the distribution of the trigeminal nerve. Patients with TN suffer from intractable pain that can become refractory to medical management that prompts evaluation for surgical cure. Compression of the trigeminal nerve is the most common identifiable cause of TN.7,10,11,13,27,36 A variety of surgical options exist, which include minimally invasive procedures such as stereotactic radiosurgery (SRS), percutaneous procedures such as glycerol rhizotomy (GR), radiofrequency-thermocoagulation GR (RFTC-GR), and more invasive procedures such as microvascular decompression (MVD). MVD aims to reverse the presumed etiology of TN via placement of a Teflon pledget between the compressed nerve and, most commonly, an overlying vascular structure. It is considered the gold standard surgical treatment for patients with medically intractable TN and demonstrable compression.15,26,31 Although MVD has been shown to exhibit the most durable outcomes, some patients elect to undergo less invasive procedures or are poor surgical candidates.16 Initial pain relief outcomes for patients undergoing MVD are excellent, ranging from 70% to 100% in multiple studies.1,4,8,12,16,18,29,31,32,34,38 TN patients commonly undergo multiple less invasive treatment options prior to MVD, but the effect of these prior surgical treatments on the efficacy of subsequent MVD has not been elucidated. Furthermore, few studies have compared the efficacy of MVD performed as first-line surgical intervention to MVD performed as a subsequent surgical intervention, nor has there been examination of factors associated with multiple interventions prior to MVD that predict outcomes.

We retrospectively reviewed medical records of patients treated from 1998 to 2015 and identified a total of 942 patients with a diagnosis of TN, 500 of whom underwent MVD at our institution. Outcomes were available for 489 MVDs (98%), and 5 MVDs (1%) were excluded due to lack of follow-up. Of note, a subset of patients included in the analysis in this manuscript was reported on in a previous paper;9 however, we were addressing a different question. The diagnostic criterion for TN was pain in the distribution of the trigeminal nerve; pain that was intermittent, paroxysmal, shocklike, and lancinating in character; triggered by light touch; and responsive to TN medications. Idiopathic pain was described in 485 patients (97%), and 4 (1%) patients who experienced a component of constant, atypical pain were excluded. We also identified and excluded 1 patient with an epidermoid tumor causing compression (0.5%), leaving 481 patients (98%) for subsequent analysis. Of the 481 patients, 306 patients underwent MVD as their first surgical intervention and 175 patients underwent MVD as a subsequent surgical intervention. All patients who underwent subsequent MVD were included for analysis, regardless of the type of surgical intervention they first received. We defined prior interventions as GR, RFTC-GR, and SRS. Inclusion criteria are documented in Table 1. Our institutional review board approved this study.

Patients were positioned either in park-bench position or supine with a shoulder bump under the ipsilateral shoulder and the patient's head pinned in a Mayfield clamp, rotated 60° toward the contralateral shoulder. Neuronavigation was used to identify the junction between the sigmoid sinus and transverse sinus over which a 5-cm curvilinear skin incision was made. The Anspach drill was used to make a 3 × 2–cm retrosigmoid craniectomy. A cruciate dural opening was made and the arachnoid was incised to release CSF from the cisterna magna. The Leyla bar and Yaşargil retractor were positioned to gently retract the cerebellum medially. The microscope was brought in and the trigeminal nerve was visualized. The nerve was explored circumferentially to identify all possible arterial and venous sources of compression. Teflon pledgets were fluffed and positioned between the nerve and sources of compression to decompress the trigeminal nerve.

Follow-up information was collected from outpatient records and surveys that were mailed to patients' homes to determine pain outcomes from surgical intervention, any pain recurrences, and any subsequent operations in both treatment groups. Follow-up surveys were used to gather information on postoperative outcomes and recurrence. The retrospective review of medical records included demographic information, medical history, TN symptomatology and medications, and the outcomes of prior surgical interventions.

MVD has been shown to be the only surgical treatment that directly treats the proposed etiology of TN. It is relatively safe, and the number of procedures performed in the United States rose by 194% between 1988 and 2008.3,28,37 Additionally, MVD has been shown to have higher rates of TN pain relief in the elderly.6,21,33 However, it is an invasive procedure and not without certain risks, although these risks have been shown to be independent of age.23 We retrospectively analyzed the clinical outcomes of 481 patients, in whom MVD was either the first or a subsequent surgical intervention after less invasive procedures. In patients who underwent a subsequent MVD, we documented a lower rate of pain relief compared with patients who underwent an initial MVD. Additionally, patients who underwent MVD as their first surgical intervention experienced lower rates of facial numbness in the preoperative and postoperative period. The rates of complications in both groups were similar, and there were no deaths in our series.

MVD has the potential to alter facial sensations in a variety of ways, and, interestingly, at baseline, somato-sensory perception may be altered in patients with TN. Miles et al. demonstrated decreased tactile sensation in asymptomatic nerve distributions on patients' symptomatic side preoperatively (p = 0.006). Using the contralateral division as a control, they reported that by 6 months after surgery, patients had no difference in perception of touch, as well as coolness, the latter being less significant. They also demonstrated a significant difference between pinprick sensation on the symptomatic side and the asymptomatic side that resolved at the 12-month postoperative time point. Last, among patients whose TN affected the maxillary division, the skin temperature on the symptomatic side was 0.6°C lower than that on the asymptomatic side preoperatively.22 Hypesthesia can affect up to 37% of cases, while facial numbness may occur in 1.6%–17.3% of patients.3,4,15 Of note, postoperative facial numbness has been shown to predict facial burning and aching and be a predictor of worse outcomes (p = 0.03).3 Our study demonstrated a slight increase in reported facial numbness in both cohorts of patients after MVD. Furthermore, the number of patients with no facial numbness versus any numbness before and after MVD among patients who underwent an initial vs a subsequent MVD was significant (p < 0.0001).

Various attempts have been made to identify the patient population most likely to benefit from MVD for the treatment of TN. Key patient and disease characteristics have been shown to predict better outcomes and a lower likelihood of recurrence. Jo et al. performed a retrospective study to establish such characteristics and were able to identify patient age < 70 years, high severity of contact/compression, and single-vessel compression as being correlated with better outcomes. Additionally, their group found a positive correlation between preoperative neuroimaging features and neurovascular compression, specifically the presence of the “CSF rim” sign, defined as a narrow CSF signal between the nerve and the vessel on axial constructive interference in steady-state (CISS) imaging, as well as the “deviation” sign, which was defined as deviation on horizontal compression also identified on axial CISS.14 Zhang et al. also attempted to identify prognostic factors for patients undergoing MVD for the treatment of TN. Their group identified typical symptoms, preoperative MRI findings, and intraoperative findings of vessel compression as prognostic factors suggestive of an excellent outcome.38 Finally, Barker et al. identified 4 factors predicting long-term relief: immediate postoperative pain relief, male sex, absence of venous compression, and preoperative symptom duration greater than 8 years.4

Multiple risk factors for TN recurrence in patients undergoing MVD exist. Some studies have shown female sex as a risk factor for recurrent TN, while others have shown evidence to the contrary.12,17,21,35 Greater time from symptom onset to treatment has also been identified as a risk factor for recurrence after MVD.2,5 The nature of the pain has also shown to be a poor prognostic factor after surgery. Szapiro et al. reported a 95% cure rate in patients with paroxysmal pain versus a 58% cure rate in patients with paroxysmal and permanent pain, which was statistically significant (p < 0.001). Furthermore, among patients with permanent pain, those with pain involving 2 or more divisions fared worse after MVD than patients whose pain involved only 1 division.34 Finally, the presence of compression has been shown to be associated with lower rates of recurrence compared with the absence of compression.6,21,25 Interestingly, Barba and Alksne reported that prior destructive surgery was a prognostic factor for poor outcome in patients undergoing MVD (p < 0.005).2 Barker et al. reported 4 factors that predicted higher rates of recurrence, which were female sex, preoperative symptom duration > 8 years, venous compression, and lack of immediate postoperative pain relief.4

Inherent to our study are several limitations. Although multiple studies have revealed that duration of symptoms is a reliable predictor of outcome, numerous variables may also influence outcomes. Data pertaining to these variables—for example, vascular compression, sex, and TN pain—were collected in our series and may also independently influence surgical outcomes.2,5 Multiple surgeons performed the MVD procedure, and, as a result, there is likely a small difference in interoperator variability. However, this potential operator variability difference did not manifest in complication rates, as the rates of complications were similar in both groups. This may have manifested as some surgeons offering MVD to different-age patient populations, as well as with different pain outcomes. Furthermore, the patient population at our tertiary-care center is unique and represents patients who may have self-selected for MVD. Another limitation lies in the retrospective nature of the study and the descriptive nature of facial numbness. No objective definition/measures aside from patient self-reports exist with regard to numbness, and this represents an inherent limitation to the BNI hypesthesia scale. Last, pain outcomes were not classified objectively but rather based on patient self-reports with results interpreted through the context of a standardized pain outcome scoring system.

Dr. Michael Lim is a consultant for Stryker. Dr. Goodwin is a UNCF Merck Postdoctoral Fellow and has received an award from the Burroughs Wellcome Fund. This article reflects the views of the authors and should not be construed to represent the FDA's views or policies.

Portions of this work were presented in abstract form at the Annual Meeting of the American Association of Neurological Surgeons, May 2–6, 2015, Washington, DC. 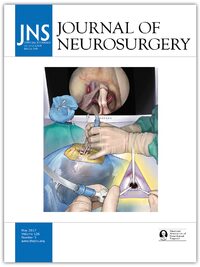