Letter to the Editor: Are arachnoid cysts and Chiari malformation Type I more common in those with postconcussion syndrome?

TO THE EDITOR: We read with interest the article by Tator et al.11 describing the presentation of 221 patients treated for postconcussion syndrome at a single center (Tator CH, Davis HS, Dufort PA, et al: Postconcussion syndrome: demographics and predictors in 221 patients. J Neurosurg [epub ahead of print February 26, 2016; DOI: 10.3171/2015.6.JNS15664]). This report contains a great deal of useful information on this challenging syndrome and will be a valuable addition to the literature on concussions. The authors found 10 patients (4.5%) with Chiari malformation (CM) Type I and 8 patients (3.6%) with intracranial arachnoid cyst (AC) and concluded that these findings are significantly overrepresented in individuals with concussion compared with the general population. We would like to present an alternative interpretation for their AC and CM prevalence data and suggest that these rates do not necessarily prove that AC and CM are more common in those with postconcussion syndrome.

To prove that these findings are overrepresented, it is necessary to properly determine their expected imaging prevalence in a valid comparison group. Unfortunately, the article does not contain internal control groups with respect to CM or AC prevalence, necessitating the use of prevalence estimates drawn from other previously published studies. This technique does not allow for age or sex matching and does not control for differences in methodology among studies. We believe that the imaging prevalence of AC and CM in the control population was underestimated in this article and, as a result of this, the prevalence difference, if any, between those with postconcussion syndrome and the general population may have been substantially overestimated.

Tator et al.11 use a population prevalence estimate for CM of 0.00078% and compare this prevalence to the CM imaging prevalence in their own cohort. They cite two articles as the basis for this estimate. In the first article, Meadows et al.4 found a higher prevalence of CM on imaging (175 patients with CM out of 22,591; 0.77%) in a cohort of mostly adult patients undergoing MRI at a single referral center. Furthermore, there is some evidence that the prevalence of CM on imaging changes with the age of the population being studied5,8,10 and that the prevalence of CM is higher in a population of children and young adults than in the general population or a population that includes a large number of older adults. Age differences are especially relevant when comparing to a group experiencing postconcussive symptoms since a group of patients experiencing concussion is likely to be younger than a cohort undergoing imaging for any reason. The second article that is referenced for CM prevalence is a review article that attempted to derive CM prevalence by back-calculating from early estimates of syrinx prevalence.9 This calculation assumed that early syrinx prevalence estimates were correct and syrinx was found in 68%–80% of those with CM.9 Although this rate of syrinx in CM patients is the most frequently reported range for those undergoing surgery, there is no basis for assuming this is accurate for all patients with CM, including those not selected for surgery. Since a syrinx is frequently cited as a surgical indication for CM decompression,6,7 it is likely that its prevalence in those with CM is overestimated in surgical series and that the syrinx prevalence in patients with CM is lower when those not undergoing surgery are also included.10

We believe that a substantial amount of evidence supports a much higher prevalence estimate for CM on imaging than the 0.00078% estimate that was used as a basis for comparison in the article, especially in the younger age groups that were most represented in the concussion study. An age-matched comparison group is essential for comparing CM prevalence between groups since its prevalence may be higher in younger patients than older adults.3,5,8 Recent analyses that focus on younger patients have shown imaging prevalence rates between 2.1% and 3.6% in these age groups.3,8,10 Even the Rotterdam study— which focused on older adults—found a 0.9% prevalence of asymptomatic CM.12 Taken together, the vast majority of recent evidence supports the fact that the prevalence of CM on imaging is substantially higher than 0.00078%, especially in young patients. For this reason, we believe that further study is required before any conclusions can be reached on any putative overrepresentation of CM in those with concussion.

Regarding ACs, Tator et al. compared AC prevalence in the concussion group to a population prevalence estimate for AC ranging from 0.006% to 1.7%. The authors did not cite references for these estimates. They concluded that ACs were significantly more prevalent in those with postconcussive symptoms. Using the higher estimate for AC prevalence that was provided, no statistically significant difference was seen compared to their concussion group. More recent estimates of AC prevalence on imaging range between 1.1% and 3.3%,1,2,12 supporting a prevalence estimate on the higher side of the range that was stated in the article. In addition, the highest prevalence of AC may been found in young males,2 a group that is overrepresented in most concussion cohorts. For these reasons, we suggest that the AC prevalence in the group of patients with postconcussive syndrome is not likely significantly different than those in a valid comparison population.

Once again, we congratulate the authors on their valuable contribution to the literature on concussion.

We appreciate the comments on our paper made by Drs. Strahle and Maher and agree that we may not have used the appropriate control population for comparing the incidence of CM and ACs in our series of patients with postconcussion syndrome (PCS). The authors indicated that our PCS patients were likely younger than the general populations to which we compared them, because CM especially, and perhaps AC as well, may be more prevalent in younger patients. Thus, PCS patients may not have a higher incidence of either of these congenital anomalies than appropriately matched general populations. Now that we have raised the issue of a possible relationship between PCS and CM or AC, it remains for future studies to examine these issues in larger populations of PCS patients who have either CM or AC and to make the comparisons with age-matched segments of the general population. 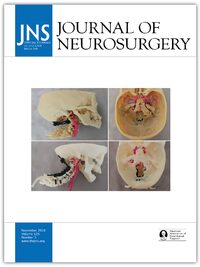