This investigation was done to examine, following implantation of vagus nerve stimulators, the relationship of vocal cord paralysis to the inner diameter of the coils used to attach the stimulator lead to the nerve.

All data in this investigation were collected, as mandated by the FDA, by the manufacturer of vagus nerve stimulators and were made available without restrictions for analysis by the authors. The data reflect all initial device implantations in the United States for the period from 1997 through 2012.

This investigation was done to examine, following implantation of vagus nerve stimulators, the relationship of vocal cord paralysis to the inner diameter of the coils used to attach the stimulator lead to the nerve.

All data in this investigation were collected, as mandated by the FDA, by the manufacturer of vagus nerve stimulators and were made available without restrictions for analysis by the authors. The data reflect all initial device implantations in the United States for the period from 1997 through 2012.

Vocal cord paralysis is a serious and much-feared complication related to the implantation of vagus nerve stimulators. Strong evidence supports the effectiveness of vagus nerve stimulation (VNS) in reducing the frequency and severity of seizures in many patients with epilepsy and in the treatment of other disorders, such as depression and intractable hiccups.1,7–9 Implantation of vagus stimulators is less invasive than other operations done for epilepsy and has a lower incidence of associated complications, particularly the more serious ones.2 Complications from the surgery required for implantation include failure to obtain benefit, infection, and permanent vocal cord paralysis.4,10,11,13 An increasing number of new implantations are done in the United States each year, and vocal cord paralysis is reported to occur in approximately 1% of these cases.3,5,10,14 Although vocal cord paralysis occurs uncommonly, this risk must be explained to patients when obtaining informed consent and, unfortunately, frightens some patients away from trying VNS therapy. Information that could reduce this risk and any associated fear would be important.

The coils that secure the stimulator lead to the vagus nerve are available in two inner diameters: 2 and 3 mm. We performed this study to test the hypothesis that vocal cord paralysis following implantation of vagus nerve stimulators occurs more frequently with leads having the smaller 2-mm coils than those with 3-mm coils.

No financial support, no monetary reward of any kind, and no promise or understanding of future reward was received from the manufacturer. Their representatives exercised no input or influence in the investigational design, analysis and interpretation of data, or conclusions drawn. Neither did they have any right of approval, alteration, or rejection of the prepared manuscript prior to its submission for publication.

The 1-tailed chi-square statistic with Yates correction was used to assess probabilities in 2 × 2 tables under consideration. A binomial distribution was assumed for the computation of 95% confidence intervals (http://statpages.org/confint.html). A p value ≤ 0.05 was required for significance.

Distribution of vocal cord paralysis in patients with implanted vagus nerve stimulators, as a function of coil diameter on stimulator leads

Vocal cord paralysis that follows the implantation of a vagus nerve stimulator must occur from injury to the vagus nerve or to the recurrent laryngeal nerve. It is reasonable to believe that the vagus nerve is the site of injury in most if not all cases because 1) the paralysis occurs significantly more frequently with one coil size, 2) the surgical approach and details of the technique for surgical implantation are the same for both coil sizes, and 3) the recurrent laryngeal nerve is never knowingly disturbed. An anomalous nonrecurrent inferior laryngeal nerve can be present either with or without an aberrant subclavian artery, and perhaps such an anomaly could predispose the vagus nerve to injury during stimulator implantation.12 We have no data on the range of diameters, cross-sectional areas, or cross-sectional shapes of the vagus nerve at various patient ages, but it is reasonable to believe that there is variation in all of these categories in all age groups, with a tendency for the nerve to be smaller in children. After the nerve is surgically exposed, surgeons subjectively assess its size and choose for implantation a lead with either 2- or 3-mm coils. Although the basis for choosing the coil size may be inconsistent over time and from surgeon to surgeon, it is not surprising that leads with 2-mm coils are chosen significantly more frequently (p < 0.01) in patients younger than 18 years (96%) than in those aged 18 years and older (90%).

The commonly assumed cause of vocal cord paralysis in these cases is surgical injury to the vagus nerve during stimulator implantation. Certainly the nerve can be injured while exposing and dissecting the nerve and then attaching the coils by compression with a hemostat or forceps, by heat and desiccation from electrocoagulation, from longitudinal stretching during dissection, or from complete transection. But these mechanisms alone cannot explain the identified difference in risk for the two coil sizes.

Another plausible explanation for vocal cord paralysis following implantation of a vagus nerve stimulator is constriction of the nerve as the result of a mismatch in size between a relatively large nerve and the surrounding helical coils. It would be difficult if not impossible for a surgeon to distinguish between a slightly snug fit that could be safely tolerated and a tighter fit that would cause immediate or delayed injury to the vagus nerve. Regardless of its crosssectional shape, when a nerve is tightly encircled by helical coils, it is forced into an annular shape, and each coil, acting as an elastic spring, applies relentless constriction. Following a seemingly uneventful and safe placement of coils, tight encirclement of the vagus nerve may produce immediate nerve injury and dysfunction or can result in ischemia, perhaps mild at first, with slowly progressing edema, tighter constriction, and worsening ischemia, until the axons that innervate the vocal cord are temporarily or irreversibly injured. The time course could be quite variable. Constriction of the vagus nerve with progressive ischemia could explain the delayed occurrence of vocal cord paralysis following implantation.6

The physical properties of the coils themselves must also be considered. The structural thickness of both 2- and 3-mm coils are the same, but their radii of curvature, 1 and 1.5 mm, respectively, are quite different. The smaller coils can be expected to have greater rigidity. Thus, a 2-mm coil exerts greater constricting or closing force than does a 3-mm coil. Stated differently, the resistance to centrifugal expansion of a constricted nerve, whether slight or severe, is greater by 2-mm coils than by 3-mm coils. Snug encirclement of the vagus nerve within 2-mm coils could be expected to be less well tolerated than that within the 3-mm coils.

The psychomotor task of dealing with coils that are smaller and more rigid requires greater manipulation of both the coils and the nerve. Although the surgical implantation of both 2- and 3-mm coils is typically understood and described as being insignificantly different, it is not uncommon for surgeons to find implantation of the smaller coils to be recognizably more difficult, more time consuming, and frustrating. The risk of inflicting injury to the vagus nerve during surgery is therefore increased as a result of the greater difficulty in attaching the smaller and structurally stiffer 2-mm coils. All surgeons are not equally experienced, and it is reasonable to believe that not all surgeons are equally adept at implanting vagus nerve stimulators. It is also possible that only a few surgeons across the country are responsible for a disproportionate number of nerve injuries in this series, but both of these possibilities seem very unlikely in our opinion, and there is no evidence to support either of them.

A steady increase in the incidence of vocal cord paralysis, from 0.07% in the youngest pediatric group to 1.07% in patients 65 years and older, was associated with the 2-mm coils but not the 3-mm coils (Fig. 1). No case of vocal cord paralysis was reported with the 3-mm coils in any person younger than 18 years or over 64 years. A satisfactory explanation for the steadily increasing age-related vulnerability to injury of the vagus nerve in response to surgical implantation of only the 2-mm coils is not readily apparent. The vagus nerve is not known to enlarge throughout life nor in response to long-term exposure to anticonvulsant medications. A progressively increasing risk of injury to the nerve during surgical implantation that would increase across all age groups, both children and adults, seems unlikely. Interestingly, 92% of all implanted leads have 2-mm coils—the rate is 90% for patients 65 years and older. Regardless of the reason, the implantation of leads with 2-mm coils is less well tolerated with advancing age, whether attributable to the structure of the coils themselves, the act of attaching them to the vagus nerve, or simply a diminishing tolerance by the nerve.

We are aware of no data describing a relationship between coil size and effectiveness in achieving seizure control, and it is not intuitively apparent that there should be a relationship. Choosing a coil that is 0.5 mm different in its inner radius would result in only a very small difference in the distance between the most remote axons within an encircled nerve and some portion of the encircling electrode. Even a very small nerve would never remain perfectly centered within the coils, except when there is a snug fit of the two electrode-containing coils. Scar tissue would fill any gaps between electrodes and nerve and is not an electrical insulator. There would always be electrode contact on much of the nerve, even small nerves.

Implantation of vagus nerve stimulators with leads having 2-mm inner-diameter coils in patients 18 years of age and older was associated with vocal cord paralysis at almost twice the rate as occurred with 3-mm inner-diameter coils: 0.51% versus 0.26%. The risk of vocal cord paralysis is directly related to patient age at implantation. We argue that the 2-mm coils are more rigid than the 3-mm coils given their difference in radius of curvature, and this difference in rigidity, combined with the greater difficulty in attaching smaller stiffer coils to the vagus nerve, increases the risk of injury. Vocal cord paralysis is a rare but very serious complication, and every reasonable precaution should be made to avoid it in every patient.

We gratefully acknowledge Cyberonics Inc., particularly Clinton Wright, for providing the data, which made this report possible. 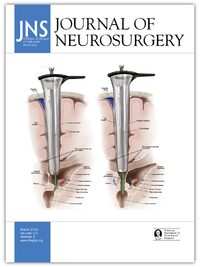 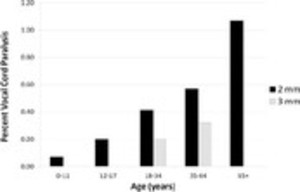