Intraaxial dermoid cyst of the medulla

Intracranial dermoid cysts are rare congenital lesions that typically occur in the cisternal spaces. However, exceptionally rare cases of intraaxial involvement have been reported, with only 8 cases having been described in the literature. The authors report the first case of an intraaxial dermoid cyst located in the medulla and the first occurrence in an elderly patient. They also review the literature of the existing intraparenchymal cases and provide treatment guidelines. A 66-year-old man presented with slowly progressive dysphagia, left lower-extremity numbness, nausea, and hyperhidrosis. Neurological examination revealed decreased pinprick sensation of the left side of his face and body, and decreased vibratory sensation in his left lower extremity. Additionally, he had an unusual extraocular movement in which abduction of the eye resulted in closure of the contralateral eye. Magnetic resonance imaging revealed a nonenhancing cystic lesion centered in the medulla. The patient underwent a suboccipital craniotomy with laminectomy of C1–2 for excision of the cyst, with subtotal resection due to adherence of the cyst wall to the brainstem. At follow-up 7.5 years after surgery, the patient's neurological examination was stable. Magnetic resonance imaging did not reveal any progression or recurrence of the cyst. As the cyst wall is typically adherent to surrounding structures, resection is usually subtotal due to the risk of neurological deficits. As there have been no cases of progression after subtotal resection, gross-total resection is not warranted for the treatment of these lesions. 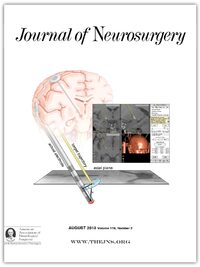