Object. The syndrome of medial temporal lobe epilepsy (MTLE) may occur in patients in whom magnetic resonance (MR) images demonstrate normal findings. In these patients, there is no evidence of hippocampal sclerosis on neuroimaging, and histopathological examination of the resected hippocampus does not reveal significant neuron loss. In this paper the authors describe the distinct clinical features of this MTLE subtype, referred to as paradoxical temporal lobe epilepsy (PTLE).

Methods. The authors selected 12 consecutive patients with preoperative findings consistent with MTLE in whom MR imaging did not demonstrate any hippocampal abnormality. Onset of hippocampal seizure was confirmed by long-term intracranial monitoring. There were six female and six male patients with a mean age of 32 ± 11 years (mean ± standard deviation [SD]) at presentation. These patients' seizure histories, available hippocampal volumetric measurements, and hippocampal cell densities in different subfields were reviewed. Sharp electrode recordings from dentate granule cells that had been maintained in hippocampal slices provided a measure of excitation and inhibition in the tissue. We compared these data with those of a cohort of 50 randomly selected patients who underwent anteromedial temporal resection for medial temporal sclerosis (MTS) during the same time period (1987–1999). The durations of follow up (means ± SDs) for the PTLE and MTS groups were 51 ± 59 months and 88 ± 44 months, respectively.

Ten patients (83%) in the PTLE cohort and 23 patients (46%) in the MTLE cohort had secondary generalization of their seizures. Among patients with PTLE, volumetric measurements (five patients) and randomized blinded visual inspection (seven patients) of the bilateral hippocampi revealed no atrophy and no increased T2 signal change on preoperative MR images. All patients with PTLE underwent anteromedial temporal resection (amygdalohippocampectomy, in five patients on the left side and in seven on the right side). Electrophysiological studies of hippocampal slices demonstrated that dentate granule cells from patients with PTLE were significantly less excitable than those from patients with MTS. The mean pyramidal cell loss in the CA1 subfield in patients in the PTLE group was 20% (range 0–59%) and that in patients in the MTS group was 75% (range 41–90%) (p < 0.001). Maximal neuron loss (mean loss 38%) occurred in the CA4 region in six patients with PTLE (end folium sclerosis). At the last follow-up examination, six patients (50%) in the PTLE group were seizure free compared with 38 patients (76%) in the MTS group.

Conclusions. Clinical PTLE is a distinct syndrome with clinical features and surgical outcomes different from those of MTS. 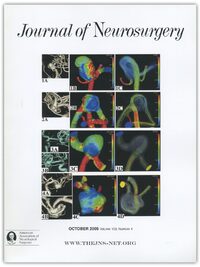