Object. Vertebrobasilar nonsaccular intracranial aneurysms (NIAs) are characterized by elongation, dilation, and tortuosity of the vertebrobasilar arteries. The goal of this study was to define the frequency, predictors, and clinical outcome of the enlargement of vertebrobasilar NIAs.

Methods. Patients with vertebrobasilar fusiform or dolichoectatic aneurysms demonstrated on imaging studies between 1989 and 2001 were identified. In particular, patients who had undergone serial imaging were included in this study and their medical records were retrospectively reviewed. Prospective information was collected from medical records or death certificates when available. Both initial and serial imaging studies were reviewed. The authors defined NIA enlargement as a change in lesion diameter greater than 2 mm or noted on the neuroradiologist's report. A Cox proportional hazards regression was used to model time from diagnosis of the vertebrobasilar NIA to the first documented enlargement as a function of various predictors. The Kaplan-Meier method was used to study patient death as a function of aneurysm growth.

Conclusions. Forty-eight percent of vertebrobasilar NIAs demonstrated on serial imaging enlarged, and this growth was associated with significant morbidity and death. Significant risk factors for aneurysm enlargement included symptomatic compression at the initial diagnosis, transitional or fusiform vertebrobasilar NIAs, and initial lesion diameter. Further studies are necessary to determine appropriate treatments of this disease entity once enlargement has been predicted or occurs. 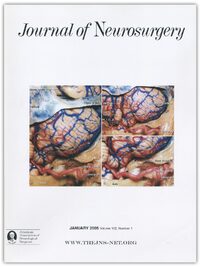