Object. The diagnosis of low-grade glioma (LGG) cannot be based exclusively on conventional magnetic resonance (MR) imaging studies, and target selection for stereotactic biopsy is a crucial issue given the high risk of sampling errors. The authors hypothesized that perfusion-weighted imaging could provide information on the microcirculation in presumed supratentorial LGGs.

Methods. All adult patients with suspected (nonenhancing) supratentorial LGGs on conventional MR imaging between February 2001 and February 2004 were included in this study. Preoperative MR imaging was performed using a dynamic first-pass gadopentate dimeglumine—enhanced spin echo—echo planar perfusion-weighted sequence, and the tumors' relative cerebral blood volume (rCBV) measurements were expressed in relation to the values observed in contralateral white matter. In patients with heterogeneous tumors a stereotactic biopsy was performed in the higher perfusion areas before resection.

Among 21 patients (16 men and five women with a mean age of 36 years, range 23–60 years), 10 had diffuse astrocytomas (World Health Organization Grade II) and 11 had other LGGs and anaplastic gliomas. On perfusion-weighted images demonstrating heterogeneous tumors, areas of higher rCBV focus were found to be oligodendrogliomas or anaplastic astrocytomas on stereotactic biopsy; during tumor resection, however, specimens were characterized predominantly as astrocytomas. Diffuse astrocytomas were associated with significantly lower mean rCBV values compared with those in the other two lesion groups (p < 0.01). The rCBV ratio cutoff value that permitted better discrimination between diffuse astrocytomas and the other lesion groups was 1.2 (80% sensitivity and 100% specificity).

Conclusions. Perfusion-weighted imaging is a feasible method of reducing the sampling error in the histopathological diagnosis of a presumed LGG, particularly by improving the selection of targets for stereotactic biopsy. 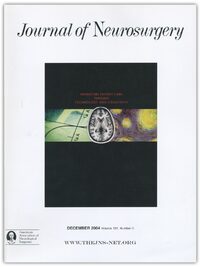