Object. Management of hydrocephalus caused by expansive lesions of the posterior fossa is complicated by two main drawbacks of shunt devices: sudden decompression and overdrainage. The ventriculoperitoneal (VP) continuous-flow (CF) shunt is characterized by a peritoneal catheter with an internal diameter of 0.51 mm that promotes continuous drainage of cerebrospinal fluid (CSF) at its production rate. The authors have previously demonstrated in adult patients with hydrocephalus that sudden decompression and overdrainage are absent when this shunt is used; here they report the findings of a prospective study in which the goal was to test the performance of this shunt in patients with severe hydrocephalus due to lesions of the posterior fossa.

Methods. During a 5-year period, 103 patients with severe hydrocephalus caused by lesions of the posterior fossa were treated by placement of a VP shunt. In 53 of these patients (control group) a shunt and valve system was surgically implanted and in 50 patients a CF shunt was implanted. All patients were followed up for a minimum of 2 years after surgery.

Shunt revision or change was necessary in 21 patients (40%) with conventional shunts and in four patients (8%) with the CF shunt (p < 0.003). Signs of overdrainage were observed in 18 patients (34%) in the control group, four of whom had ascending transtentorial herniation; this complication was not seen in patients with the CF shunt.

Conclusions. The CF shunt had a low rate of dysfunction and an absence of complications caused by overdrainage, which were frequently associated with the control shunts. The hydrodynamic properties of the CF shunt make it effective, even in severe cases of hydrocephalus caused by lesions of the posterior fossa. 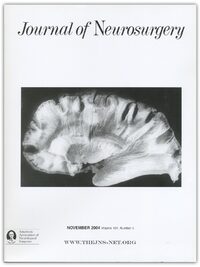