Object. The aim of this study was to identify the optimal surgical goals and techniques for managing symptomatic Rathke cleft cysts (RCCs).

Methods. The authors conducted a retrospective study of 62 consecutive patients who had undergone surgery for RCCs. Postoperative follow up was a mean of 28 months. Fifty-six patients underwent transsphenoidal cyst decompression and biopsy procedures, and six underwent cyst wall resection. Postoperatively, symptoms improved in 91% of patients with headaches and 92% of patients with visual deficits. Decompression and biopsy were associated with a 10% incidence of new anterior pituitary hormone deficiencies and a 6% incidence of new permanent diabetes insipidus; the incidence of new hormone deficiencies was significantly higher in the few patients who had undergone cyst wall resection. The incidence of relapse, defined as cyst regrowth with either recurrent symptoms or chiasmal compression, was 16%. Resection of the cyst wall was associated with a trend toward a decreased risk of relapse. Sellar packing, sellar floor reconstruction, and irrigation with absolute ethanol did not affect the likelihood of relapse. Squamous metaplasia and inflammation increased the risk of relapse. Residual cyst demonstrated on postoperative magnetic resonance imaging was associated with an increased risk of subsequent asymptomatic cyst regrowth. Seven patients (11%) underwent repeated operation with symptomatic improvement and minimal morbidity; only one patient relapsed following a second surgery.

Conclusions. Decompression and biopsy procedures in the treatment of RCCs lead to improvement in signs and symptoms, with low morbidity rates. Repeated operations will be required in as many as 16% of patients but are also associated with symptomatic improvement, low morbidity, and durable remission. Decompression and biopsy may represent the optimal surgical management of RCC. 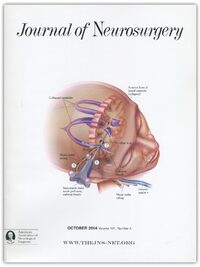