✓ The authors present two cases of patients with small, acutely ruptured, wide-necked aneurysms of the distal vertebral artery that were not amenable to conventional coil embolization and were instead treated by means of a double-stent method in which one stent was placed inside another. Angiography performed immediately after the procedure revealed a significant reduction in aneurysm filling; total occlusion of the lesion was observed after 7 days and confirmed 6 months later in both aneurysms. By placing one stent inside the other, stent permeability can be reduced, which may result in significant hemodynamic changes with accelerated aneurysm thrombosis. This double-stent method may represent a therapeutic alternative, especially in cases of small, wide-necked aneurysms in which conventional endovascular techniques or stent-supported coil embolization is not considered feasible or is believed to be too dangerous, and surgical treatment is contraindicated. 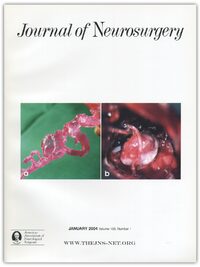