Lesions of the ventral epidural space of the upper cervical spinal cord pose a unique challenge. The transoral transpharyngeal approach has historically been described as an effective approach to these pathologies,1–7 but risks such as infection, cerebrospinal fluid fistula, and postoperative pulmonary complications have resulted in high morbidity and mortality, leading surgeons to consider alternative approaches to this region.8–10 Although the endoscopic endonasal approach has advantages over the transoral approach, resection of the odontoid process and transverse ligament requires posterior fixation and fusion. Endoscopic endonasal approaches also require a skilled multidisciplinary team, which may not be readily available at all spine centers. The direct lateral approach (also known as the far lateral transatlas, extreme lateral transatlas, or anterolateral approach) involves C1 hemilaminectomy and partial or complete lateral mass resection and has been proposed as one alternative.11,12

Although some ventral atlantoaxial pathologies are the result of chronic instability and require fusion for definitive treatment, some—such as tumors, epidural abscesses, and epidural hematomas—only require access to the ventral pathology without the need for stabilization. In these scenarios, the direct lateral transatlas approach may best accomplish this goal. When complete lateral mass resection is performed, this leads to clinical instability and instrumented stabilization is required.11,13–15 To date, however, no biomechanical studies have been performed to evaluate occipitocervical stability after partial C1 lateral mass resection. Studies of condylectomy with the far lateral approach suggest that 50% of the condyle can be resected without significant increases in range of motion (ROM),16 but these studies are not directly applicable to the direct lateral transatlas approach.

In this study, we performed an in vitro biomechanical evaluation of the craniovertebral junction after sequential unilateral C1 lateral mass resection. We hypothesized that partial resection of the lateral mass would not result in a significant increase in ROM, and may therefore not require internal stabilization.

We obtained eight fresh-frozen, unembalmed human cadaveric cephali consisting of the occipital bone (Oc) to at least C3. Donors were between 18 and 75 years of age with a body mass index between 18.5 and 40 at the time of death. Donors with a history of craniovertebral surgery, spinal malignancy, or rheumatoid disease were excluded. Occipitocervical radiographs were also reviewed to rule out traumatic injuries, spinal fusions, and craniocervical deformities. The craniums were transected rostrally from just above the supraorbital rim to the inion, and all soft tissue and musculature was removed while preserving ligaments and joint capsules. Specimens were stored at −20°C and thawed to room temperature for testing. Specimens were thawed once, and all testing for each specimen was performed in a single session.

Specimens were rigidly affixed to the robotic testing system at the Oc and C3, and infrared optoelectronic sensors were rigidly fixed to C1 and C2 without causing any bony destruction, as previously published.16 The spatial relationships between the robot, load cell, and each vertebral segment (Oc–C3) were established using a digitizer made up of motion tracking markers. Coordinate system definitions for the vertebral segments were established according to Techy et al.17 Prior to testing, each specimen was preconditioned with three loading and unloading cycles of ±1.5 Nm along flexion/extension (FE), axial rotation (AR), and lateral bending (LB) to minimize viscoelastic effects. The robot applied a constant compressive force of 40 N throughout testing to simulate head weight load.

In each testing state, the robot applied ±1.5 Nm of torque of in FE, AR, and LB. The robot also simulated coupled ROM by applying ±1.5 Nm of torque in AR after applying 1.5 Nm of torque in extension (AR+E) and flexion (AR+F). Similarly, coupled ROM was performed by applying ±1.5 of Nm torque in LB after applying 1.5 Nm of torque in the left AR (LAR; LB+LAR) and right AR (RAR; LB+RAR). In each testing state, ROM testing was performed in the same order, with the coupled ROM testing first, followed by LB, FE, and AR, for a total of 14 loading trajectories. During each loading trajectory, primary and off-axis loads, along with rotational rate of change, were monitored. The loading condition was terminated when each load and rotational rate were within a prescribed range of their target value (±2, ±5, and ±2 N for posterior, compressive, and lateral shear load, respectively; ±0.1 Nm for F, AR, and LB torque; and ±0.1°/sec for F, AR, and LB rate of change). Overall spine, Oc–C1, and C1–2 ROM were recorded for each loading trajectory. The specimens were returned to a predefined visual and force-neutral position between each loading trajectory.

Overall ROMs in each primary movement (FE, AR, and LB) and in each coupled movement (AR+E, AR+F, LB+LAR, and LB+RAR) were compared among each testing condition using two-way repeated-measures ANOVA to allow each specimen to serve as its own control to account for baseline differences in ROM. Post hoc Tukey-Kramer analysis was performed for multiple comparisons between groups. All analyses were performed using RStudio, and p < 0.05 was defined as statistically significant.

Oc–C1 primary and coupled ROM in intact and surgical states

C1–2 primary and coupled ROM in intact and surgical states

Compared with the intact state, 25% and 50% lateral mass resection resulted in no significant change in ROM for any primary or coupled movement. Seventy-five percent lateral mass resection, compared with the intact state, resulted in a significant increase in ROM for FE (4.5°, p = 0.008) and LB+LAR (1.9°, p = 0.013), respectively. Complete resection resulted in further increases in the C1–2 ROM in all movements except AR+F.

Oc–C2 primary and coupled ROM in intact and surgical states

In a prior biomechanical study by Kshettry et al. of occipitocervical stability with sequential occipital condyle resection, significant increases in ROM were only achieved after 75% resection of the condyle.16 In contrast, we found that 50% resection of the C1 lateral mass led to significant increases in ROM. This is likely because the C1 lateral mass functions as a two-joint structure (Oc–C1 and C1–2), whereas the occipital condyle is only a one-joint structure. Additionally, Kshettry et al. performed joint-sparing condylectomy, whereas we disrupted both the Oc–C1 and C1–2 joint spaces in this study. For certain ventral C2 pathologies, if adequate surgical access can be achieved by removing lateral mass while preserving the Oc–C1 joint, it may be possible to retain greater native stability.

In our clinical experience, we have found that less than 25% lateral mass resection is generally required for ventral epidural pathologies such as hematoma or abscess. Although some ventral epidural tumors may require additional resection, this can typically still be less than 50%. In Fig. 4, we show a postoperative axial CT after a right-sided direct lateral approach in which less than 25% of the lateral mass was resected. In this case, we were afforded adequate working space, and the patient did not show any signs of instability.

The results of this study should be interpreted within the context of its limitations. Although we used a validated biomechanical method in this study, in nonhealing cadaveric models only testing for acute instability can be performed, which does not address the effects of repeated cyclical loading and unloading (i.e., chronic instability). However, the ROMs for the intact specimens in our study were similar to previously reported values, which adds to the reproducibility and precision of our methodology.13,16,19 We also chose to evaluate the biomechanical effects of non–joint-sparing lateral mass resection, but in certain clinical scenarios, the joint may be preserved, which could lead to a lesser degree of instability with lateral mass resection. In this study, we chose predefined surgical conditions, which limits our ability to draw conclusions for lateral mass resections between 25% and 50%. Finally, we used increase in ROM as a surrogate for instability, but there are no precise ROM definitions for occipitocervical instability, and clinical factors should be included in decision-making in this patient population.

This study was funded by the Cleveland Clinic Research Program Committee (RPC #1389). 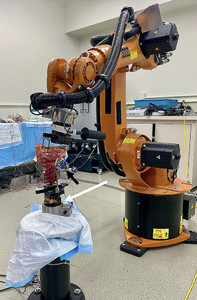 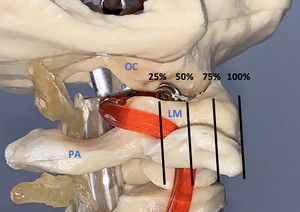 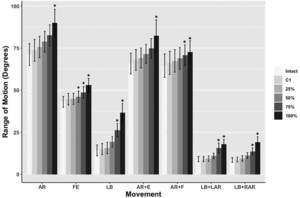 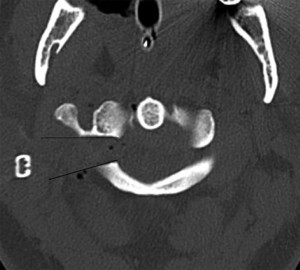