The aim of this study was to show the surgical results of growing rod (GR) surgery with prior foundation surgery (PFS) and sublaminar taping at an apex vertebra.

Twenty-two early-onset scoliosis (EOS) patients underwent dual GR surgery with PFS and sublaminar taping. PFS was performed prior to rod placement, including exposure of distal and proximal anchor areas and anchor instrumentation filled with a local bone graft. After a period of 3–5 months for the anchors to become solid, dual rods were placed for distraction. The apex vertebra was exposed and fastened to the concave side of the rods using sublaminar tape. Preoperative, post–GR placement, and final follow-up radiographic parameters were measured. Complications during the treatment period were evaluated using the patients’ clinical records.

The aim of this study was to show the surgical results of growing rod (GR) surgery with prior foundation surgery (PFS) and sublaminar taping at an apex vertebra.

Twenty-two early-onset scoliosis (EOS) patients underwent dual GR surgery with PFS and sublaminar taping. PFS was performed prior to rod placement, including exposure of distal and proximal anchor areas and anchor instrumentation filled with a local bone graft. After a period of 3–5 months for the anchors to become solid, dual rods were placed for distraction. The apex vertebra was exposed and fastened to the concave side of the rods using sublaminar tape. Preoperative, post–GR placement, and final follow-up radiographic parameters were measured. Complications during the treatment period were evaluated using the patients’ clinical records.

Surgical intervention is indicated in cases of progressive and severe early-onset scoliosis (EOS) that do not respond to nonoperative treatment. The surgical technique includes distraction-based systems and guided growth constructs.1–5 A growing rod (GR) technique is a widely performed distraction-based technique that is effective in spinal deformity correction, spinal growth, and thoracic growth.1,2,5 The postoperative complication rates of the GR technique remain high, however, and implant-related complications have been reported as the most common complication in previous studies.6,7 Staged insertion of a GR to enhance anchor site strength has been reported in some papers, but implant-related complications have still not been resolved.8,9 Sublaminar wires are used in the Luque trolley method for multiple anchors,10 but this method has resulted in unwanted fusion and is not in standard use today.11 However, multiple anchors would create a more stable construct than fewer anchors.

Our GR procedures have included prior foundation surgery (PFS) to enhance anchor site strength and sublaminar tape fastening of only the apex vertebra to the concave-side rod with the intention of increasing the stability of the instrument. Since the GR technique with both PFS and sublaminar taping has not been proposed in previous studies, the effectiveness of combining the two techniques is unclear.

This study was conducted to determine the surgical results of the GR technique with both PFS and sublaminar taping for treating EOS and to evaluate the efficacy of the technique, focusing on postoperative complications.

This was a single-institution retrospective study of patients undergoing dual GR placement with PFS and sublaminar taping for EOS between the years 2007 and 2016. All patients were followed up for at least 2 years. Demographic and surgical data were retrospectively reviewed from the patients’ clinical charts. Preoperative, post–GR placement, and final follow-up radiographic parameters were measured, which included the main scoliotic Cobb angle, maximal thoracic kyphosis, T12–S1 lumbar lordosis, T1–S1 length, and Campbell’s space available for the lung ratio.12 All radiographic parameters were measured using measurement software (Centricity Enterprise Web version 3.0, GE Healthcare Japan).

The Wilcoxon rank-sum test was used to compare radiographic parameters. The level of significance was set at 0.05. Statistical analyses were performed using a software package (JMP version 9.0, SAS).

PFS was developed to enhance anchor site strength. In PFS, proximal and distal anchor areas were exposed in a subperiosteal fashion, anchor instruments (hook or screw) were inserted with local bone grafts around the implants, and short rods connecting the instruments were placed. Local bone grafts were taken from the spinous processes in the anchor area. The choice of anchor levels depended on characteristics of the curvature. The upper anchor levels were usually at T2 or T3. The lower anchor levels were at the most stable vertebra.

Following an interval of about 4 months after PFS for the foundation to become solid, the long rods for distraction between the 2 anchors were placed intramuscularly. The proximal and distal rods were connected by tandem or side-to-side connectors. The connectors were placed at the thoracolumbar level (T10–L2), which is the inflection region of thoracic kyphosis and lumbar lordosis. The lamina of only the apex vertebra was also exposed in a subperiosteal fashion and fastened to the concave-side rod using sublaminar tape (ultra-high-molecular-weight polyethylene fiber cable, 3.5 mm in width). Exposure was limited in the upper and lower edges and center part of the lamina to avoid damage to the facet joint capsule, which might cause unwanted spontaneous fusion. If the connectors would disturb the fastening of the apex lamina and rod, the next lamina was used. Sublaminar tape was tightened as much as the lamina could tolerate to enhance scoliosis correction.

Rod lengthening was performed at intervals of around 6 months, continuing until the spine was mature enough to proceed with final fusion (Fig. 1). No patients were prescribed a brace during the postoperative period.

Twenty-two EOS patients (4 boys and 18 girls) whose median age at initial surgery was 55.5 months (range 28–99 months) were included. The median treatment/follow-up period was 69.5 months (range 25–98 months). EOS etiologies included 10 idiopathic, 10 syndromic, 1 neuromuscular, and 1 congenital. Curve types were 5 double thoracic, 10 main thoracic, 2 thoracolumbar, and 5 double major. The proximal foundations used a hook in 19 and a pedicle screw in 3. The distal foundations used a hook in 13 and pedicle screw in 9. The patients had a median of 8 rod-lengthening procedures (range 4–15); 18 patients are still undergoing lengthening procedures, and 4 patients underwent final fusion (Table 1). In total, 188 surgeries were performed, excluding PFS.

Summary of clinical data for all 22 patients

Denotes significant differences (p < 0.05) between these groups in the respective angle categories.

Denotes significant differences (p < 0.05) between these groups in the respective angle categories.

Rod breakage is a common complication even in the dual GR procedure, with a reported rate of greater than 20% in several past studies.6,7,9 Although a recently reported dual GR study with PFS used a 6-mm rod, the breakage rate did not decrease.9 The rod breakage rate in the current study was clearly lower (i.e., 5%) than in past studies. Moreover, all patients in the present study did not require external support (e.g., brace or body cast) during the entire treatment course. These results mean that the dual GR technique using only PFS could reduce foundation-related complications but not rod breakage; on the other hand, with combined PFS and sublaminar taping, both foundation-related complications and rod breakage could be reduced. To the best of our knowledge, there have been no published reports on dual GR surgery in which sublaminar taping was used. Though no previous study has shown the mechanical effect of apical sublaminar taping in GR surgery, we speculate that fixing an apex of the scoliotic curve to the rod would be crucial to stabilizing the construct and reducing the mechanical stress that causes rod breakage.

The median thoracic kyphosis and lumbar lordosis increased between GR placement and the final follow-up in the current study. This trend of change in sagittal alignment is similar to the data in previous studies on conventional dual GR techniques.1,5 Shah et al. reviewed the cases of 43 children treated with a dual GR technique and wrote that the trend of increases in thoracic kyphosis and lumbar lordosis with age seen in healthy children was also observed after lengthening of the GR.5

One of the possible adverse effects of sublaminar taping may be autofusion due to exposure of the lamina when placing the tape. Sublaminar wire and rod constructs without fusion10 in growing children have been shown to inhibit spinal growth due to subperiosteal dissection that causes heterotopic bone and autofusion.11 On the other hand, McCarthy and McCullough4 reported that the placement of apical instrumentation and fusion, including 3 to 4 segments, are crucial for controlling the curve and compared favorably with GR in terms of the growth of spinal length. In the current study, an increase in spinal growth of 15.5 mm/year was seen at T1–S1 from the preoperative period to the final follow-up, which is comparable to that seen in previous conventional dual GR surgery reports.1,16 It may safely be said that sublaminar taping at an apex lamina does not inhibit spinal growth.

There are several limitations to this study. First, this was retrospective study with a small sample size and no control group. Second, this study did not control the selection of anchor implant type. Hooks were used in all patients at the beginning of this series and recently in patients with too narrow a pedicle for screw placement. Schelfaut et al.9 reported improved stability at the foundation when performing PFS with hooks. Now, pedicle screws are used in all patients when possible because studies in an immature animal model confirmed that prior pedicle screw insertion improved stability at the bone-implant interface by osseointegration.17 Therefore, we consider that PFS with both hooks and screws efficiently enhances anchor stability, and the difference in implant types would not have affected the results of this study. Third, although the follow-up period in this study was 69.5 months, which was longer than the period in past dual GR studies,1,2,6,7,9 the majority of patients were still in the growing phase and had not reached the time for the final fusion surgery at the final follow-up. The complication rate could still be higher because late-onset complications can occur during extended follow-up. The complication rate of the patients reaching final fusion will be reported in a future study.

In this study in which 22 EOS patients were treated with a dual GR procedure with combined PFS and sublaminar taping, the Cobb angle correction rate was 62.5%, and postoperative implant-related complications affected 14% of the patient population. These results mean that this technique can yield good correction of the scoliotic curve with fewer complications.

Dr. Taneichi reports support of non–study-related clinical or research efforts that he oversees from Stryker and Medtronic. 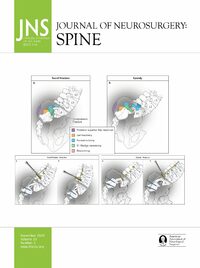