Golf: a contact sport. Repetitive traumatic discopathy may be the driver of early lumbar degeneration in modern-era golfers

In 2018, we watched golf’s most dominating player unexpectedly return to the competitive arena. Following three lumbar laminotomy and microdiscectomy procedures, beginning in 2014, Tiger Woods, now 43 years old, succumbed to years of incapacitating back pain and spasms and underwent an L5–S1 anterior lumbar interbody fusion in April 2017. Seven months later, the winner of 14 major golf championships and 79 Professional Golfers’ Association (PGA) events returned to tournament play, claiming to be finally pain free and a “walking miracle.” Swinging the golf club at measured speeds of 129 mph at the April 2018 Master’s Tournament—as fast as any other player on the tour—Woods appeared to be back in full physical capacity. His victory at the Tour Championship may be considered one of the greatest comebacks in all of sports history.

As spine surgeons, we appreciate golf’s impact on spinal health, given that there are nearly 32 million golfers in the United States (2017 statistic), or 1 in 10 people.15 Among professional and amateur golfers, back disorders remain the most common injury, comprising 55% and 35% of injuries in these groups, respectively.7,8,13 Likewise, an increasing number of young professional golfers are experiencing low-back pain and degenerative disc disease at ages much younger than those of the general adult population.5 To understand why this is occurring, one needs to take a closer look at how the modern golf swing has changed in recent decades.

While seemingly innocuous at first glance, the forces necessary to generate swing speeds that allow golfers to hit the ball at their current distances are significant and place extraordinary loading and torsional stress vectors on the lumbar spine. Some estimates indicate that professional golfers experience about 7500 N of compressive force on the spine during the downswing, which is about eight times the average human body weight and comparable to forces calculated for football linemen while striking a blocking sled.10,12 Considering that the average golf player takes more than 300 swings per day, the long-term effects are not trivial, particularly for a sport that allows for decades of participation.

As technology has propelled driving distances forward, so too has the focus on creating swing paths that produce the most power. To achieve the acceleration required for club head speeds greater than 100 mph in one-fifth of a second, a slow deliberate backswing is followed by an explosive rotational downswing. By rotating their hips, shoulders, and hands backward, players generate wound-up, spring-like potential energy that is then released in a concentric movement as the club comes back down. During this phase, the hips slide forward (hence the phrase “leading with the hips”) and both hips and shoulders twist toward the target to pull the club into the follow-through. This takes advantage of the stretch-shorten cycle of muscle fibers to maximize energy output.2

Modern golf instruction has focused on maximizing rotation of the thorax relative to the hips to store up elastic potential energy, which is unleashed during the downswing. Three-dimensional swing-tracking software has shown that the greater the angle created by shoulder rotation (a line through the acromion of each shoulder) and hip rotation (a line connecting the hips), the greater the club speed generated, a concept known as the “X-factor” because these lines form the shape of an X (Fig. 1 upper).14 In addition to the X-factor, players are taught to keep arms tight into their body during the downswing, shifting and translating the hips, while explosively twisting the torso and shoulders around the center of mass as the ball is struck. This creates an immense amount of lateral bending force on the trailing side of the spine (for a right-handed golfer, the right side, which is farther from the target) and torsional axial moments, as the club achieves its greatest speed right before impact with the ball.2 Despite the variability in swing patterns, conservation of these swing patterns is highly maintained among high-performance golfers, particularly professional players. This swing style differs from that historically employed by the greats, such as Jack Nicklaus or Ben Hogan, for whom a much longer backswing was followed by a relaxed downswing and follow-through characterized by roughly equal amounts of pelvic and thoracic range of motion.6

In a study of Japanese professional golfers, Sugaya and colleagues demonstrated quite drastically, for the first time on radiographic imaging, an asymmetric degeneration of the lumbar spine compared to non-golfer controls.17 In particular, these researchers saw increased osteophyte formation and asymmetric facet pathology on the golfer’s trailing side. We too have seen this within our practice among elite golfers seeking consultation for back pain. This has led to a theory that the “crunch” in a golfer’s swing may be pathogenic and is related to the product of trunk rotational velocity and lateral flexion on the trailing side (Fig. 1 lower).16 Unfortunately, independent studies have failed to explain back pain in populations of golfers solely by using this computed kinematic parameter.3

Electromyography (EMG) studies have focused on the immense physiological effort and neuromuscular control required to complete the golf swing.1 To create the necessary sequential timing of contributory movements, the spinal erector muscles, abdominal muscles, upper- and lower-extremity muscles, and shoulder muscles all have to fire in a precise order. It has been suggested that the lumbar erector spinae muscles are activated earlier in patients with low-back pain, indicating an essential role in their stabilization of the spine during the swing and a potential role of inappropriate muscular activation in the pathophysiology of disease.4,11 As seen with many other sports in the modern era, there has been an increasing focus on developing the athlete’s strength, particularly that of core stability areas. This was adopted early by Tiger Woods and has since become nearly ubiquitous in the sport. Unfortunately, while developing strength has resulted in players achieving stronger swings, it seems likely that it simultaneously places greater forces on their spines.

As a consequence of these factors, we believe that modern-day golfers, particularly elite players who follow intense strength-training regimens to let loose the enormous potential of tightly wound muscle fibers, are repeatedly traumatizing their lumbar spine. We have seen this pathological situation numerous times in our practice among high-level young players and have termed it “repetitive traumatic discopathy” (RTD). A drastic example of this is shown in Fig. 2, which illustrates the case of a young male player who required two microdiscectomy procedures. In our practice we see multiple patients yearly with varying degrees of this disease for clinical evaluation. Similar to the neural pathophysiology of chronic traumatic leukoencephalopathy, with its underlying chronic, repetitive cranial trauma, this disease process is likely the product of multiple subclinical microstrains on the disc annulus, spinal ligaments, and facet joints rather than a single injury-provoking swing. This explains why Woods failed to improve after lumbosacral nerve decompression procedures alone and brings into question the best management for such golf player patients when they present for evaluation.

Certainly, initial management in players with back pain would include aggressive core and flexibility training with conservative therapies in the absence of disc herniation causing neurological deficits. It has been suggested that aggressive golf-specific training and rehabilitation can improve back pain in some patients.9 Limited flexibility of the hips and spine has been correlated to low-back pain in golfers as well and, therefore, should be the focus of any therapeutic regimen. It seems possible that Woods’ other orthopedic injuries (affecting his knee and Achilles tendon), which preceded his back issues, may have contributed to alterations in swing biomechanics that augmented the strain on his back. The participation of physical therapists and spine interventionalists with an advanced understanding of this special disease pathology may prove advantageous for treating patients and helping them return to play.

As we move forward, we should continue to study this special patient population and attempt to better define the pathophysiology and treatment algorithms. Recently, golf rehabilitation institutes have opened to study 3D swing biomechanics and address these issues in a more scientific way. We hope not only to improve upon the treatment for patients with untreated low-back pain, but also to enhance the rehabilitation of those who have already required surgery and wish to get back on the golf course. This applies not only to professionals, but also to players of all skill levels and ages.

Regarding the optimal surgical treatment for patients with RTD when conservative measures have failed, it is unclear whether these patients require special consideration. In Woods’ case, a traditional attitude of avoiding fusion at all costs seems to have been appropriately employed, but it likely delayed his successful return to professional golf for 4 years, leaving him with intractable pain and debilitating spasms during that time. While the ultimate fate of his golf career remains to be seen, hindsight inspection of his case suggests that perhaps fusion should be considered earlier for the special circumstance of professional players with RTD.

In instances in which fusion is required, we would advocate for a muscle-sparing minimally invasive lateral or anterior approach, as was performed in Woods’ case. This likely is most advantageous for avid players, given the importance of posterior spinal erector muscles that would be damaged during traditional open posterior approaches. Future research should focus on the benefits of these approaches for golfers and other athletes.

Nevertheless, the natural history of adjacent-segment disease in this vulnerable population will also need to be followed in the years to come as modern-era golfers continue to age and require treatment. Only time will tell whether the same RTD pathology will result in damage for Woods at more proximal levels. Discussion of the expectations and recovery for both decompression surgery and fusion procedures should be employed during surgical consultation when seeing these patients.

Special thanks to the Barrow Neuropublications Department and to medical illustrator Peter Lawrence for assistance with this paper and figures. 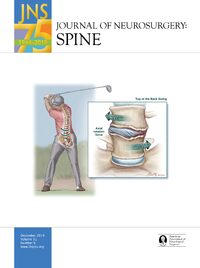 Schematic drawings demonstrating the local effects of the modern golf swing on the lumbar spine (example shown at the L4–5 level), contributing to RTD. Upper: During the backswing, maximal rotation of the golfer’s shoulders relative to the hips creates wound-up potential energy known as the “X-factor,” while also creating a supramaximal amount of torsional axial rotation of the lumbar spine. Lower: During an explosive downswing, lateral flexion results in a “crunch” of the trailing side of the spine, asymmetrically loading the disc and facet joints. © 2018 Barrow Neurological Institute. Used with permission.

T2-weighted sagittal (A) and axial (B) MR images obtained in a 22-year-old collegiate elite right-handed golfer presenting with severe disc degeneration at L4–5 with large disc herniation that caused back pain and severe radiculopathy (arrows). The patient underwent a right-sided L4–5 microdiscectomy procedure. After surgery, he returned to play, but the symptoms recurred 3 years postoperatively, at which time T2-weighted sagittal (C) and axial (D) MR images demonstrated repeated herniation on the right side at the same level (arrows). The patient underwent a second microdiscectomy procedure but did not continue with competitive golf. 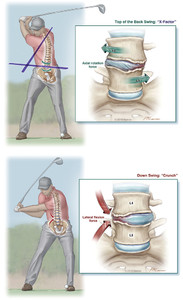 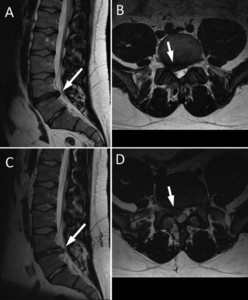