The authors retrospectively analyzed records of patients aged 18 years or older who underwent surgical correction of ASD that involved 4 or more spinal levels by the same spine surgeon between 2010 and 2016. Data regarding patient characteristics, comorbidities, surgical factors, and perioperative transfusions (up to 10 days after surgery) were analyzed using a linear regression model. Significance was set at p < 0.05.

The authors retrospectively analyzed records of patients aged 18 years or older who underwent surgical correction of ASD that involved 4 or more spinal levels by the same spine surgeon between 2010 and 2016. Data regarding patient characteristics, comorbidities, surgical factors, and perioperative transfusions (up to 10 days after surgery) were analyzed using a linear regression model. Significance was set at p < 0.05.

Surgery for adult spinal deformity (ASD) is associated with substantial blood loss because of the extensive soft-tissue dissection and osteotomies required.17 This increased risk of blood loss leads to a greater need for intravascular volume replacement. From 2000 to 2009, the number of allogeneic blood transfusions performed during spinal arthrodesis increased.34 However, allogeneic transfusions in surgical patients are associated with increased rates of wound complications, postoperative infections, and pulmonary complications, although the causal relationships are unclear.14 This risk must be weighed against the risk of spinal hypoperfusion, which can lead to neurological deficits after major blood loss.5,32 Other intravascular resuscitative options include using other colloids and intraoperative blood salvage.

Perioperative blood management in patients with ASD remains poorly studied. Many factors, including modifiable preoperative risk factors and the use of specific intraoperative techniques, including blood salvage, must be studied to better understand risk factors for perioperative transfusion requirement during and after major spine surgery. The goal of our study was to identify factors associated with intraoperative and postoperative transfusion requirement (total units transfused) in patients treated with posterior spinal arthrodesis for ASD and to provide evidence to support appropriate strategies for perioperative blood management.

Institutional review board approval was obtained for this study. We retrospectively reviewed records of consecutive patients (n = 192) treated with posterior spinal arthrodesis for ASD by the same experienced spine surgeon between 2010 and 2016. We included patients who underwent thoracolumbosacral fusion at 4 or more vertebral levels (spanning 5 or more vertebrae) and who had a diagnosis of scoliosis, kyphosis, or kyphoscoliosis. We excluded patients with polio or spina bifida; those with a spinal tumor, infection, or acute trauma; and those for whom preoperative hemoglobin values were not retrievable. A total of 165 (86%) patients were included in the study.

We retrospectively studied the medical records of these patients to review patient characteristics (age, sex, weight, race, and American Society of Anesthesiologists score),11 comorbidities, surgical factors, and total number of perioperative transfusions. We recorded their hemoglobin concentrations (in grams per deciliter) before surgery (within 1 month of the index procedure) and throughout the hospital stay for up to 10 days after surgery. The comorbidities recorded were cardiovascular disease, diabetes mellitus, hypertension, and history of smoking. Intraoperative details we assessed included whether the surgery was a primary or revision procedure, operative time, estimated blood loss (EBL), number of spinal levels fused, intraoperative use of an antifibrinolytic agent, number of osteotomies performed, and amount of intraoperatively salvaged blood used. Osteotomies were classified using the Schwab classification.26

The number of transfused units each patient received was recorded. Transfusions were recorded in units of allogeneic packed red blood cells (pRBCs) and were classified as intraoperative or postoperative. Transfusions were given according to results of the assessment of various clinical parameters and judgment of the attending surgeon (the same surgeon for all patients), the attending anesthesiologist present for the case, and the intensivist who attended to the patients during postoperative intensive care unit stays.

Instances of transfusion reactions and infections of any type within the 30-day postoperative period were analyzed and recorded also.

We analyzed intraoperative and postoperative transfusion quantities. Linear regression analysis was performed using Stata 11.0 software (StataCorp LP). For this analysis, Schwab grade 1 osteotomies were not quantified. Patients were dichotomized as having fewer than 3 or 3 or more grade 2 osteotomies. Schwab grade 3 and 4 osteotomies were grouped together, as were Schwab grade 5 and 6 osteotomies. These variables were characterized in a binary fashion. Preoperative hemoglobin values were tiered according to approximate quartiles; the lowest quartile included patients with a preoperative level of less than 11.5 g/dl, and the highest quartile included patients with a preoperative hemoglobin level of 14.0 g/dl or greater. Our analysis of factors predictive of intraoperative transfusions required (total units transfused) included the aforementioned characteristics and comorbidities, operative time, number of levels fused, the use of osteotomies, and all modifiable preoperative risk factors. The postoperative transfusion analysis included the same factors and the EBL assessed at the end of each procedure, total number of units of intraoperatively salvaged blood used, and total number of units of allogeneic pRBCs transfused intraoperatively. Last, we performed univariate and multivariate regression analyses to determine whether a greater number of units of pRBCs transfused was associated with an increased infection rate in the 30-day postoperative period. In the multivariate analysis, we adjusted for comorbidities, demographic characteristics, American Society of Anesthesiologists score, operative time, number of levels fused, whether the surgery was a primary arthrodesis, and number of units of intraoperatively salvaged blood. Significance was established at p < 0.05.

Determinants of the Number of Allogeneic pRBC Units Transfused Intraoperatively

Determinants of the number of units of allogeneic pRBCs transfused intraoperatively

Determinants of the Number of Allogeneic pRBC Units Transfused Postoperatively

Determinants of the number of units of allogeneic pRBCs transfused postoperatively

No transfusion reactions were noted. We observed 26 (16%) infections during the 30-day postoperative period. Infections included urinary tract infection (12 [7.3%]), surgical site infection (10 [6.1%]), pneumonia (2 [1.2%]), cellulitis of the foot (1 [0.6%]), and bacteremia of unknown cause (1 [0.6%]). On univariate regression analysis, having a greater number of units of pRBCs transfused was associated with a significantly higher rate of infection (p = 0.015), although after we adjusted for pertinent clinical covariates, the association was not significant (p = 0.35).

Other operative factors were significantly associated with perioperative transfusions. A greater mean number of units were transfused intraoperatively in patients undergoing osteotomies, and the number of units was correlated positively with Schwab grade. Greater blood loss with more extensive spinal osteotomy has been found; 3 levels of Smith-Petersen osteotomies (Schwab grade 2) resulted in less blood loss than a single-level pedicle subtraction osteotomy (Schwab grade 3 or 4, depending on extension).9 Operative time was also significantly associated with increased numbers of units transfused intraoperatively and postoperatively, which supports the findings of Zou et al.,36 who correlated operative time with blood loss in patients who underwent surgery for lumbar disc herniation. However, in our study, the number of levels fused was not significantly associated with transfusion volume, which contradicts the results of a study by Zheng et al.,35 who showed that the number of levels fused was a significant predictor of the number of perioperative units transfused. However, in their analysis of predictors of transfused units, they did not adjust for operative time.35 Last, antifibrinolytic use was associated with fewer units transfused postoperatively, which resulted in a mean 0.87-U decrease in postoperative transfusion volume, which is similar to previous findings.4

Another factor that might influence perioperative transfusion requirements is a history of smoking. Cigarette smoke produces vascular derangements, including increased erythrocyte membrane fragility15 and increased thromboembolism risk,2 and it is associated with an increased risk of atherosclerosis.3 Despite these vascular effects, smokers paradoxically have an elevated hemoglobin concentration,24,30 which might be caused by chronic carbon monoxide exposure, which leads to decreased molecular oxygen delivery per hemoglobin and subsequent compensatory increases in the hemoglobin level.16,30 However, McCunniff et al.19 found that patients with a history of smoking are at increased risk of requiring postoperative transfusion, which agrees with the findings from our study. These data suggest that despite their higher preoperative hemoglobin level, patients with a history of smoking might not have an adequate hematological reserve. Such patients might need a higher preoperative hemoglobin concentration before surgery to avoid additional transfusions. We were unable to assess this possibility within the framework of our study.

Many factors influence perioperative transfusion requirements in patients undergoing surgery for ASD. Modifiable risk factors, such as preoperative hemoglobin concentration, should be considered when planning surgery. History of smoking might fall within this category, although we were unable to assess whether smoking cessation changed transfusion requirements (total number of units). However, patients with a history of smoking might require a higher preoperative hemoglobin concentration to withstand the hematological insult of major spine surgery. Furthermore, the use of intraoperative blood salvage should be weighed against traditional intraoperative allogeneic blood transfusion, because it might not be as effective in decreasing postoperative transfusion requirements. The use of antifibrinolytic agents should be considered to lessen the number of postoperative units transfused.

By selecting a large homogeneous cohort of patients with ASD treated for similar indications by the same surgeon, we attempted to eliminate many potential confounders. However, data limitations must be considered. Retrospective analysis limits the determination of factors that can influence transfusion trends. However, we chose cases that occurred during 8 consecutive years of a single attending surgeon’s practice to ensure less case-by-case variability in how transfusions were given. Another limitation is that we did not assess a single comorbidity or frailty index, which would have allowed for more effective linear regression adjustment to control for patient health status as a potential confounder. Instead, we chose several assessed comorbidities and the American Society of Anesthesiologists score for data normalization.

Dr. Hassanzadeh has direct stock ownership in NuVasive, is a consultant for Pfizer and NuVasive, and has received clinical or research support for the study described (including equipment or material from Pfizer and Orthofix). 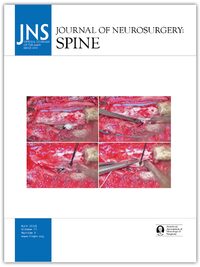