When can we expect global sagittal alignment to reach a stable value following cervical deformity surgery?

Cervical deformity (CD) is a complex condition with a clear impact on patient quality of life, which can be improved with surgical treatment. Previous study following thoracolumbar surgery demonstrated a spontaneous and maintained improvement in cervical alignment following lumbar pedicle subtraction osteotomy (PSO). In this study the authors aimed to investigate the complementary questions of whether cervical alignment induces a change in global alignment and whether this change stabilizes over time.

To analyze spontaneous changes, this study included only patients with at least 5 levels remaining unfused following surgery. After data were obtained for the entire cohort, repeated-measures analyses were conducted between preoperative baseline and 3-month and 1-year follow-ups with a post hoc analysis and Bonferroni correction. A subanalysis of patients with 2-year follow-up was performed.

Correction of cervical malalignment can have a significant impact on thoracolumbar regional and global alignment. Peak relaxation of compensatory mechanisms is achieved by the 3-month follow-up and tends to remain stable. Subanalysis with 2-year data further supports this finding. These findings can help to identify when the results of cervical surgery on global alignment can be best evaluated. 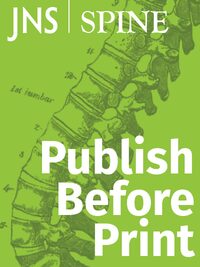