Object. Partial restoration of hindlimb function in adult rats following spinal cord injury (SCI) has been demonstrated using a variety of transplantation techniques. The purpose of the present study was twofold: 1) to determine whether strategies designed to promote regeneration in the rat can yield similar results in the primate; and 2) to establish whether central nervous system (CNS) regeneration will influence voluntary grasping and locomotor function in the nonhuman primate.

Methods. Ten cynomologus monkeys underwent T-11 laminectomy and resection of a 1-cm length of hemispinal cord. Five monkeys received six intercostal nerve autografts and fibrin glue containing acidic fibroblast growth factor (2.1 µg/ml) whereas controls underwent the identical laminectomy procedure but did not receive the nerve grafts. At 4 months postgrafting, the spinal cord—graft site was sectioned and immunostained for peripheral myelin proteins, biotinylated dextran amine, and tyrosine hydroxylase, whereas the midpoint of the graft was analyzed histologically for the total number of myelinated axons within and around the grafts. The animals underwent pre- and postoperative testing for changes in voluntary hindlimb grasping and gait.

Conclusions. 1) A reproducible model of SCI in the primate was developed. 2) Spontaneous recovery of the ipsilateral hindlimb function occurred in both graft- and nongraft—treated monkeys over time without evidence of recovering the ability for voluntary tasks. 3) Regeneration of the CNS from proximal spinal axons into the peripheral nerve grafts was observed; however, the grafts did not promote regeneration beyond the lesion site. 4) The grafts significantly enhanced (p < 0.0001) the regeneration of myelinated axons into the region of the hemisected spinal cord compared with the nongrafted animals. 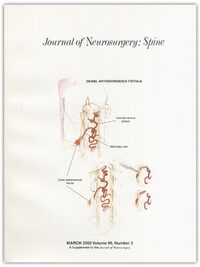