Object. Ventral foramen magnum meningiomas (VFMMs) are rare lesions that account for more than 3% of all meningiomas. These are among the most challenging of all meningiomas to treat. The authors comprehensively analyzed multiple features in a series of VFMMs.

Methods. A retrospective study was performed of 18 patients who harbored a meningioma in the ventral foramen magnum (mean follow-up period, 40 months) and underwent surgery via a transcondylar approach. Sixteen patients underwent surgery for the first time: 12 underwent gross-total (75%), two near-total (12.5%), and two subtotal (12.5%) tumor removal. The remaining two patients were treated for a recurrent tumor. After obtaining postoperative Karnofsky Performance Scale (KPS) scores at follow up, statistically significant improvement was demonstrated compared with the preoperative scores. The extent of surgery and higher preoperative KPS scores were variables that showed statistically significant favorable influence on outcome. Ninth and 10th cranial nerve deficits were the most common complications contributing to a prolonged hospital stay. There were no perioperative deaths. Four patients died during the follow-up period. The first patient died of multiple myeloma. The second patient, in whom surgery was performed to treat a recurrent tumor, died 3 years after the surgery of new tumor recurrence at the age of 80 years. The remaining two patients died 1.5 and 5 months postsurgery of pulmonary embolus and endocarditis, respectively.

Conclusions. Ventral foramen magnum meningiomas can be radically resected in a majority of patients, with frequent but transient morbidity caused by lower cranial nerve deficits. Radical removal of a recurrent tumor provides a relatively long, stable postoperative course. In patients presenting with a low KPS score a poor prognosis is demonstrated, and early diagnosis and treatment are recommended to avoid it. 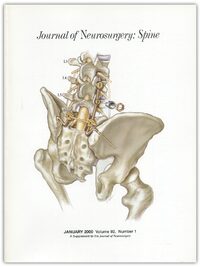