Despite the growing use of multimodal intraoperative monitoring (IOM) in cervical spinal surgery, limited data exist regarding the sensitivity, specificity, and predictive values of such a technique in detecting new neurological deficits in this setting. The authors sought to define the incidence of significant intraoperative electrophysiological changes and new postoperative neurological deficits in a cohort of patients undergoing cervical surgery.

The authors conducted a prospective analysis of a consecutive series of patients who had undergone cervical surgery during a 5-year period at a university-based neurosurgical unit, in which multimodal IOM was recorded. Sensitivity, specificity, positive predictive values (PPVs), and negative predictive values (NPVs) were determined using standard Bayesian techniques. The study population included 1055 patients (614 male and 441 female) with a mean age of 55 years.

The IOM modalities performed included somatosensory evoked potential (SSEP) recording in 1055 patients, motor evoked potential (MEP) recording in 26, and electromyography (EMG) in 427. Twenty-six patients (2.5%) had significant SSEP changes. Electromyographic activity was transient in 212 patients (49.6%), and 115 patients (26.9%) had sustained burst or train activity. New postoperative neurological deficits occurred in 34 patients (3.2%): 6 had combined sensory and motor deficits, 7 had new sensory deficits, 9 had increased motor weakness, and 12 had new root deficits. Of these 34 patients, 12 had spinal tumors, of which 7 were intramedullary. Overall, of the 34 new postoperative deficits, 21 completely resolved, 9 partially resolved, and 4 had no improvement. The deficits that completely resolved did so on average 3.3 months after surgery. Patients with deficits that did not fully resolve (partial or no improvement) were followed up for an average of 1.8 years after surgery.

Combined neurophysiological IOM with EMG and SSEP recording and the selective use of MEPs is helpful for predicting and possibly preventing neurological injury during cervical spine surgery. 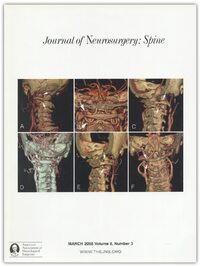