✓The authors report on a 51-year-old woman with a 9-year history of rheumatoid arthritis (RA) who presented with symptomatic rheumatoid nodules in the lumbar extradural region with compression on the L-5 nerve roots bilaterally. She had also suffered from dysesthesia in the right lower leg and intermittent claudication. Magnetic resonance imaging revealed masses compressing the dural sac, and on lumbar myelography and computed tomography myelography a filling defect at L4–5 was revealed, which was compressing the dural sac posterolaterally on both sides. The masses were surgically removed. On histological examination the typical characteristics of rheumatoid nodules were found. Soon after the operation all of the patient's symptoms disappeared.

There have been few reports on extradural rheumatoid nodules. Patients with RA usually complain of articular symptoms, and in fact the patient in the present study had been referred to the authors' institution for total hip arthroplasty. However, various symptoms other than those arising from articular lesions were found clinically. The authors believe that if patients with RA are also examined for extraarticular lesions, it is likely that these will be more frequently detected. 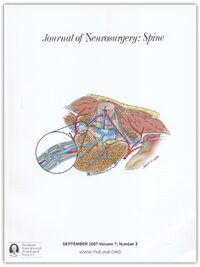