There have been no accurate surveillance data regarding the incidence rate of spinal arteriovenous shunts (SAVSs). Here, the authors investigate the epidemiology and clinical characteristics of SAVSs.

The authors conducted multicenter hospital-based surveillance as an inventory survey at 8 core hospitals in Okayama Prefecture between April 1, 2009, and March 31, 2019. Consecutive patients who lived in Okayama and were diagnosed with SAVSs on angiographic studies were enrolled. The clinical characteristics and the incidence rates of each form of SAVS and the differences between SAVSs at different spinal levels were analyzed.

There have been no accurate surveillance data regarding the incidence rate of spinal arteriovenous shunts (SAVSs). Here, the authors investigate the epidemiology and clinical characteristics of SAVSs.

The authors conducted multicenter hospital-based surveillance as an inventory survey at 8 core hospitals in Okayama Prefecture between April 1, 2009, and March 31, 2019. Consecutive patients who lived in Okayama and were diagnosed with SAVSs on angiographic studies were enrolled. The clinical characteristics and the incidence rates of each form of SAVS and the differences between SAVSs at different spinal levels were analyzed.

Spinal arteriovenous shunts (SAVSs) are abnormal connections between arteries and veins of the spinal cord or adjacent structures that present with a wide variety of neurological symptoms. They are reported to be a rare disease,1–5 but to date there has been no inventory surveillance of their incidence rate. There have, however, been some recent reports on the clinical characteristics and anatomical details of specific types of SAVS lesions, such as craniocervical junction (CCJ) AVSs and thoracolumbar spinal epidural arteriovenous fistulas (SEAVFs).6,7

In the present study, we conducted multicenter hospital-based surveillance as an inventory survey to investigate the epidemiology of SAVSs and the differences in clinical characteristics between SAVSs occurring at different spinal levels.

Patient data were derived from the Okayama Cranial and Spinal A-V Shunts (OCSS) study database obtained through multicenter hospital-based surveillance.8 Our institutional ethics committees approved this study. Written informed consent had been obtained from all patients prior to angiography, endovascular treatment, or direct surgery, but written informed consent for this study was not required because of the retrospective noninvasive study design. Patients in this study were recruited from 8 institutions in Okayama Prefecture, a province in the western part of Honshu Island in Japan with a population of approximately 1.9 million. There are more than 150 hospitals in Okayama Prefecture. Due to the rarity of these diseases, only neuroendovascular specialists diagnose and treat almost all cases of intracranial and spinal AVSs in Okayama Prefecture. During the study period, the 8 core hospitals in Okayama Prefecture that employ neuroendovascular specialists certified by the Japanese Society for Neuroendovascular Therapy received all cases of these disorders that occurred anywhere in the catchment area. Thus, we concluded that multicenter hospital-based surveillance at these 8 centers would be suitable as an inventory survey in Okayama Prefecture. The collaborating centers and doctors other than the coauthors of this study are listed in the Acknowledgments.

We classified SAVSs into four shunt types as follows: spinal AVM (SAVM), perimedullary AVF (PAVF), spinal dural AVF (SDAVF), and SEAVF. We chose these categories based on the classification proposed by Takai.9 SDAVF and SEAVF are similar diseases that have a draining vein into the perimedullary vein and often present with progressive congestive myelopathy. We differentiated between SEAVF and SDAVF based on the description of angioarchitecture by Kiyosue et al.7 We defined intramedullary glomus and juvenile AVM as SAVM due to their rarity. We classified the locations of lesions into four spinal levels: CCJ, cervical other than CCJ, thoracic, and lumbar levels. The CCJ level was defined as the level of the first and second cervical vertebrae.

We investigated the characteristics, clinical presentation, and incidence rate of each type of SAVS at each level during the study period. For a comparative analysis between lesions at the upper and lower spinal levels, we assessed clinical characteristics, treatment results, and follow-up results in all patients divided according to lesion location: CCJ/cervical level and thoracolumbar level. We excluded cases of SAVM and PAVF from these analyses because of their rarity and because they are distinct from SDAVF and SEAVF in various ways.

We performed all calculations using JMP 14 software (SAS Institute). Descriptive statistics were expressed as the mean ± SD for continuous variables, median (interquartile range [IQR]) for ordinal variables, and numbers (percentages) for categorical variables. We calculated crude incidence rates per 100,000 person-years during the 10-year study period using the monthly population survey in Okayama Prefecture.10 We calculated 95% confidence intervals (CIs) of crude incidence rates based on the Poisson distribution. Age-adjusted incidence rates were calculated according to the direct method, using the population of Okayama Prefecture from the 2015 census as a standard.10 Two-group comparison was assessed using Fisher’s exact test or the Wilcoxon signed-rank test. We presented our results as relative risk with 95% CIs. The significance level was set at p < 0.05.

Baseline and Clinical Characteristics of Each Shunt Type

We identified a total of 45 patients with SAVS during the study period. These included 2 cases of SAVM, 5 cases of PAVF, 31 cases of SDAVF, and 7 cases of SEAVF. The baseline and clinical characteristics of each shunt type are described in Table 1. The mean age at diagnosis was 66 ± 13 years, and 36 patients (80%) were male. Twenty-one patients (47%) presented with moderate or severe disability (mRS score > 2) at diagnosis. Hemorrhage and venous congestion were reported in 7 (16%) and 29 (64%) patients, respectively. All patients with hemorrhage had upper SDAVF, 5 with CCJ lesions and 2 with cervical lesions. Of all 45 lesions, 11 (24%) were at the CCJ level, 3 (7%) were at the cervical level, 19 (42%) were at the thoracic level, and 12 (27%) were at the lumbar level. All CCJ and cervical lesions were SDAVFs.

Baseline and clinical characteristics of each disease

Unless otherwise indicated, values are expressed as the number of patients (%).

Crude and age-adjusted incidence rates of SAVSs per 100,000 person-years

Unless otherwise indicated, values are expressed as the number of patients (%).

This detailed inventory survey of SAVSs reveals that the crude incidence rate of all SAVSs, including those at the CCJ level, was 0.234 per 100,000 person-years. The most common SAVS type was SDAVF/SEAVF at the thoracolumbar level, with a crude incidence rate of 0.125 per 100,000 person-years. We also present the results of a comparative analysis of lesions at different spinal levels. To the best of our knowledge, this is the first reported inventory survey of SAVSs.

The most distinctive epidemiological characteristic of SAVSs is the high incidence of SDAVF and SEAVF in older men. Several case series with large numbers of patients have shown that the proportion of men among patients with SDAVF is 72%–85%, with a mean age of 60–67 years.1,7,15–22 Among patients with SEAVF, the proportion of men is 63%–73%, with a mean age of 67–68 years.7,21,23,24 Jellema et al. found 6 thoracic arteriovenous anastomoses in 10 human cadavers who were not known to have suffered from spinal disease during life. The mean age of these cadavers was 78 years.25 This demonstrates that subclinical AVSs may occur in healthy older people more often than we suspect. The tendency of these shunts to manifest at advanced ages, as Thron has suggested, may be due at least in part to an acquired triggering mechanism like hypertension, inflammation, thrombosis, or microtrauma.26

In the present study, the proportions of men among patients with SAVS were 81% for SDAVF and 100% for SEAVF. The mean ages were 68 years for SDAVF and 73 years for SEAVF. Compared to the case series mentioned above, our results demonstrate an even older mean age for both of these SAVSs, indicating that the incidence of these diseases is continuing to increase among older men. We presume that the reasons for this ongoing increase are the aging of the overall population and therefore of the patient population, and the small number of patients in our database. One possible explanation for the higher incidence rates in men is the embryological background of the spinal dural membrane, which is composed only of dura propria derived from the neural crest cells.27 Intracranial dural AVFs with the same embryological background of the dural membrane, such as tentorial or falx dural AVFs, also have higher incidence rates in men.4,27

Most SDAVFs occur at the thoracolumbar level.1,7,15,18–20,22 The most frequent clinical presentation of SDAVF and SEAVF at the thoracolumbar level is progressive myelopathy due to venous congestion,1,7,18–20,22 but this is not so for all SAVSs: AVFs at the CCJ and cervical levels may present with progressive myelopathy or hemorrhage, with hemorrhage reported to be the most common clinical presentation.6,28–30 Likewise, two systematic review articles about CCJ AVFs have mentioned that 37.5%–43.1% of patients present with subarachnoid hemorrhage.31,32 In the present study, hemorrhage occurred only in patients with CCJ and cervical lesions.

Disease duration prior to diagnosis is one of the significant differences between the upper and lower spinal levels. The diagnosis of SDAVF at the thoracolumbar level tends to be delayed due to its nonspecific symptoms. Previous literature records that the mean and median times to diagnosis were 19–24 months and 7–12 months, respectively.1,16,18–20 SDAVFs at the CCJ and cervical levels, in contrast, may be diagnosed sooner after their onset due to presentation with hemorrhage or brainstem dysfunction.

In the present study, nearly all thoracolumbar SDAVFs and SEAVFs were obliterated, and this was achieved through embolization and direct surgery in approximately equal proportions. In CCJ/cervical SDAVFs and SEAVFs, in contrast, a larger proportion of patients were asymptomatic or had nonneurological symptoms and therefore were observed conservatively; in those cases in which lesions were obliterated, this was achieved primarily through direct surgery. Another study on a large series of intracranial dural AVFs reported that nonsinus-type AVF, including that at the CCJ level, was one of the independent risk factors for overall complications after embolization.33 According to the results of a Japanese nationwide registry of SDAVF, compared to noncervical SDAVF, cervical SDAVF was characterized by higher rates of hemorrhage onset, incomplete obliteration of the shunt, and embolization-related complications.22 Therefore, embolization of these lesions has a higher risk of brainstem or spinal cord infarction. In the present study, we treated these lesions mostly by direct surgery, which enabled our low complication rate.

The present study has some methodological limitations. First, the possibility of excluding patients who were treated outside of Okayama Prefecture or in other departments without angiography may have affected our results. Second, we may have missed some patients who were misdiagnosed with other spinal diseases and therefore not included in this database. Third, medical checkup of asymptomatic patients for spinal disease is not performed in general, and there can be undiagnosed patients. Fourth, no standardized imaging or analysis methods were applied to all patients at all participating centers. Moreover, advances in neuroimaging technology may influence the increasing number of cases. As a result of these four limitations, we may be underestimating the incidence. Meanwhile, we believe we can say that the incidence rate of all SAVSs is no less than 0.234 per 100,000 person-years, and these data are more accurate and specific than previous studies as described in the Discussion section. Fifth, because we performed this study in only one prefecture in Japan, the number of patients with each shunt type was small. Previously, two nationwide studies of SAVSs have been conducted in Japan, but these were registries rather than inventory surveys.22,34 In the future, nationwide population-based or hospital-based inventory surveys are warranted.

We conducted a multicenter hospital-based inventory survey in Okayama Prefecture and reported our findings on the clinical characteristics and incidence rates of SAVSs. The crude incidence rate of all SAVSs including those at the CCJ level was 0.234 per 100,000 person-years. The incidence rate of SDAVF and SEAVF combined increased in an age-dependent manner in men only. Most SDAVF and SEAVF cases at the thoracolumbar level presented with myelopathy, whereas those at the CCJ/cervical level presented with hemorrhage or myelopathy.

Portions of this work were presented orally at the 35th annual meeting of the Japanese Society for Neuroendovascular Therapy, which was held November 21–23, 2019, in Fukuoka, Japan.

Age-specific incidence rates of SDAVFs and SEAVFs at all spinal levels in all patients, in male patients, and in female patients. 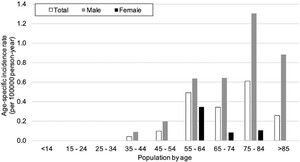 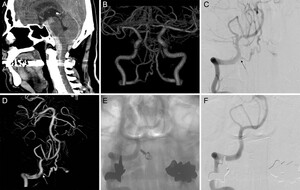 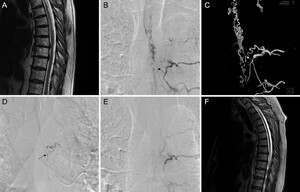