Cervical posterior decompression surgery such as cervical laminoplasty has been widely accepted as a standard treatment for cervical spondylotic myelopathy (CSM), disc herniation, ossification of the posterior longitudinal ligament, and adjacent-segment degeneration after anterior cervical decompression and fusion (ACDF).1–5 Although many studies have demonstrated the safety and efficacy of the procedure after longtime observation, there are patients who experience residual symptoms such as myelopathy, pain, and numbness. These symptoms can be critical factors that affect patients’ satisfaction after surgical treatment.6

Although numbness of the upper extremity (UE) is a common symptom of CSM,7,8 a clear definition for numbness is not well established. In general, “numbness” includes sensory disorders such as hypoesthesia, anesthesia, dysesthesia, paresthesia, and/or mild radicular pain. Due to its subjective nature and complexity, it is quite difficult to precisely define “numbness” in scientific studies. One potential method for measuring patients’ numbness is the visual analog scale (VAS) score, which is a patient-reported pain scale and frequently used to measure treatment outcomes, such as UE pain or numbness in patients with cervical spine disorders.

In this retrospective analysis, we prospectively collected the data of patients who underwent cervical posterior decompression surgery for CSM. All study participants provided written informed consent and the study protocol was approved by the IRB of our institution.

This study included 120 patients with CSM who underwent open-door C3–6 laminoplasty at our institution between January 2012 and December 2014 and were followed up for more than 2 years postoperatively. The patients were excluded if they had cervical surgery in the past (n = 5), they were < 20 years old (n = 3), or the quality of their data was not reliably sufficient for adequate analysis (n = 9). Finally, a total of 103 patients were included in the analysis (65 males, 38 females; mean age at the time of surgery 65.5 ± 12.2 years; Fig. 1).

Cervical posterior decompression surgery was performed using the open-door technique as previously described.11 In most patients, the surgery was extended from C3 to C6, and the C2 and C7 spinous processes were preserved. Hydroxyapatite spacers were placed at every level for holding the laminae open.12 The day after surgery, all patients were allowed to sit up with a soft neck collar and, if possible, to stand and walk. Brace removal was allowed 1 week after the operation. The patients were then encouraged to start exercises to strengthen the isometric muscles and improve range of motion (ROM) in the neck muscles as soon as possible. All patients were treated with the same postoperative rehabilitation protocol, including in-hospital physical therapy for 2 weeks after surgery.

Physician-assessed and patient-oriented clinical scores were recorded preoperatively and 2 years postoperatively. As a physician-assessed score for myelopathy, we recorded the Japanese Orthopaedic Association (JOA) score to evaluate the severity of cervical myelopathy.13 The visual analog scale (VAS) score for UE numbness,14 and the 36-Item Short-Form Health Survey (SF-36) results were recorded as components of the patient-oriented score.15 The VAS scores were evaluated using a 10-cm-long horizontal line with extremes indicated as “no symptoms” and “worst symptoms imaginable.” The scores of the SF-36 were summarized as physical component summaries (PCSs) and mental component summaries (MCSs), both according to formulae previously described.15 Based on previous reports, we defined the minimal clinically important difference (MCID) for the JOA score as 2.5 points, the MCID for the VAS score of neck pain and UE pain as 25 mm, and the MCID of the SF-36 PCS and MCS as 4 points.9,10,16–18

Plain cervical radiographs were obtained preoperatively and 2 years postoperatively, with the patient sitting in the neutral cervical position. The parameters of cervical sagittal balance and alignment were defined as 1) C2–7 sagittal vertical axis (cSVA), the horizontal distance between the center of C2 and the posterosuperior corner of the C7 vertebral body;21 2) C7 slope, the angle between a horizontal line and the C7 upper endplate;22 3) C2–7 lordotic angle, the lordotic angle between the tangent lines of the lower endplates of C2 and lower endplates of the C7 vertebral body; and 4) cervical ROM, the differences of the C2–7 lordotic angle between flexion and extension positions. Observers reviewed the images and measured the parameters using Synapse (Fujifilm).

The inter- and intraobserver reliabilities of every parameter were calculated using interclass correlation coefficients for continuous variables and kappa values for categorical variables. To calculate the reliability, two observers (M.I. and K.T.) measured all parameters twice at an interval of 2 weeks in between.

After dividing the overall patients into the severe and no/mild residual-numbness groups, the basic demographics were compared between the two groups using the Mann-Whitney U-test or chi-square test. In addition, the change in the UE numbness from preoperatively to 2-year postoperatively was compared between the two groups using a mixed-effects model.

To demonstrate the predictive factors, the preoperative clinical score and radiographic parameters were compared between the severe and no/mild residual-numbness groups using the Mann-Whitney U-test or chi-square test. Subsequently, the variables with a significance of p < 0.10 in univariate analysis were included in the multivariate linear regression model. In this analysis, the VAS score for residual numbness (continuous value) was set as a dependent variable, and age and sex were included as independent variables to adjust for these variables. Unstandardized partial regression coefficients (β), p values, and 95% confidence intervals (CIs) were calculated.

The inter- and intraobserver reliabilities of all variables, including plain radiograph parameters and MRI findings, were fair to excellent (Table 1).

Demographic data of the patients

The p value represents the value after comparison between the severe and no/mild residual-numbness groups.

Data are given as mean ± SD.

In the comparison between the preoperative radiographic parameters, the p values of the C7 slope and C2–7 lordotic angle ranged from 0.05 to 0.10 (p = 0.091 and p = 0.054, respectively; Table 4), although there were no significant differences between the two groups. Based on our definitions, those two parameters were included in the multivariate analysis. Other preoperative parameters, including cSVA, ROM, degree of canal stenosis, presence of snake-eye appearance, and foraminal stenosis, showed no significant differences between the two groups.

The VAS score for residual UE numbness (continuous value) was set as a dependent variable.

Improvement in Clinical Score After Surgery

Ratio of the patients with improvement greater than the MCID

The p value represents the value after comparison between the severe and no/mild residual-numbness groups.

Changes in Radiographic Parameters After Surgery

The change of cervical balance parameters including cSVA, C7 slope, C2–7 lordotic angle, and ROM showed no significant differences between the groups (Fig. 3).

Numbness is one of the most frequent complaints of patients with CSM,7,8 and Machino et al. reported that approximately 50% of sensory disorders, including UE numbness, persisted after cervical surgery, which is consistent with our results.6 Therefore, spine surgeons should recognize residual numbness in patients with CSM.

Other findings of the current study were that there was no relationship between residual UE numbness and other factors, including foraminal stenosis, intensity of cord change, severity of canal stenosis, and cervical alignment. As all patients in this study underwent cervical laminoplasty, cervical degenerative changes such as segmental instability, spondylolisthesis, disc degeneration, and facet degeneration were left as they were. Although the current study could not find a significant relationship between residual UE numbness and findings on radiography or MRI, a further study should be performed to help surgeons establish an adequate surgical strategy for laminoplasty and other procedures with fusion techniques.

The results of our current study potentially help improve the patient’s satisfaction after surgery and prevent residual UE numbness. Kong et al. emphasized that patient satisfaction depended on precise preoperative explanation.26 The current results can aid surgeons in explaining changes in symptoms after surgery, which can result in higher satisfaction in patients. Additionally, our results may suggest potential solutions of residual UE numbness, such as detecting the responsible nerve by examining the nerve conduction study preoperatively and adding posterior fixation at the responsible levels, or change surgical procedures such as ACDF or disc arthroplasty.

There are several limitations to the present study. First, its retrospective nature makes it difficult to exclude selection bias, especially regarding referral for a certain type of surgery, or particular surgical techniques applied. Second, the relatively small sample size could affect the statistical results in our study. Third, additional follow-ups (besides a 2-year postoperative follow-up) should have been performed to evaluate the progress of the residual UE numbness and to identify the causal relationship between shoulder changes and residual UE numbness. Fourth, this study included patients who underwent cervical laminoplasty, but did not include patients with other surgical procedures, such as ACDF and cervical laminectomy and fusion. Therefore, different results might have been obtained if the study included patients who underwent ACDF or cervical laminectomy and fusion. Fifth, this study could not enroll consecutive patients because we excluded patients whose VAS score data of UE numbness were missed preoperatively or 2 years postoperatively. Finally, there might be inconsistency in the severe residual-numbness group, as we used patient-reported “numbness” as an outcome for selecting the groups and the score was determined based on the patients’ own judgment. In addition, the definition of specific numbers, such as 40 mm, varied in each patient. Therefore, to identify the exact effect of residual UE numbness on surgical outcomes after cervical surgery, a further prospective study with a longer follow-up period (e.g., > 10 years) with a larger sample size is required. Nevertheless, this study was conducted using multiple clinical scores and radiographic parameters collected prospectively, and the number of patients was also sufficient for analysis. Therefore, regardless of these limitations, we believe that the current study findings can help physicians predict poor surgical outcomes in patients preoperatively.

We thank the individuals who contributed to the study or manuscript preparation but do not fulfill all the criteria of authorship.

Portions of this work were presented in abstract form as proceedings of the 34th Annual Meeting of the North American Spine Society in Chicago, Illinois, September 25–28, 2019. 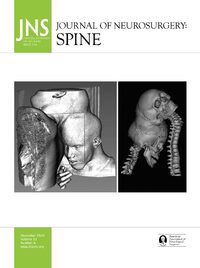 A flowchart of the included and excluded patients.

Line graph showing the change of the VAS score for UE numbness at each time point. There was a significant difference in the improvement of UE numbness between the groups (p < 0.001, mixed-effects model). 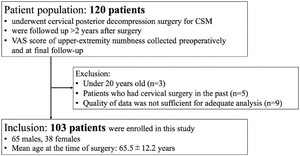 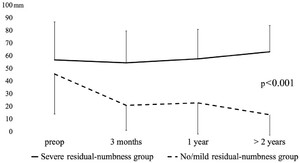