Astronaut Michael Collins, Apollo 8, and the anterior cervical fusion that changed the history of human spaceflight

In 1961, President John F. Kennedy declared that the United States would send a man to the moon and safely bring him home before the end of the decade. Astronaut Michael Collins was one of those men. He flew to the moon on the historic flight of Apollo 11 while Neil Armstrong and Buzz Aldrin walked on its surface. However, this was not supposed to be the case.

Astronaut Collins was scheduled to fly on Apollo 8. While training, in 1968, he started developing symptoms of cervical myelopathy. He underwent evaluation at Wilford Hall Air Force Hospital in San Antonio and was noted to have a C5–6 disc herniation and posterior osteophyte on myelography. Air Force Lieutenant General (Dr.) Paul W. Myers performed an anterior cervical discectomy with placement of iliac bone graft. As a result, Astronaut James Lovell took his place on Apollo 8 flying the uncertain and daring first mission to the moon. This had a cascading effect on the rotation of astronauts, placing Michael Collins on the Apollo 11 flight that first landed men on the moon. It also placed Astronaut James Lovell in a rotation that exposed him to be the Commander of the fateful Apollo 13 flight.

Here, the authors chronicle the history of Astronaut Collins’ anterior cervical surgery and the impact of his procedure on the rotation of astronaut flight selection, and they review the pivotal historic nature of the Apollo 8 spaceflight. The authors further discuss the ongoing issue of cervical disc herniation among astronauts. 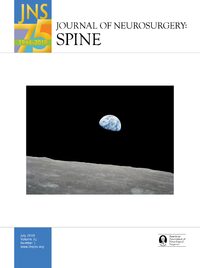