Letter to the Editor. Open fetal repair for occipital encephalocele: an experimental concept to first assess in animal models

TO THE EDITOR: We read with great interest the retrospective study by Cavalheiro and colleagues1 about open fetal repair for isolated occipital encephalocele (Cavalheiro S, Silva da Costa MD, Nicácio JM, et al. Fetal surgery for occipital encephalocele. J Neurosurg Pediatr. 2020;26[6]:605–612) and the accompanying editorial2 (Gupta N. Editorial. Fetal repair of encephaloceles. J Neurosurg Pediatr. 2020;26[6]:603–604). The underlying hypothesis is that prenatal correction may halt the progression of brain herniation and secondary microcephaly, thereby potentially improving neurodevelopmental outcomes. Although we would like to join Dr. Gupta2 in complimenting the authors for their relentless pioneering efforts and their honest report, we also wish to share some comments.

In 1991, a consensus on the criteria and indications for fetal surgery was endorsed by the International Fetal Medicine and Surgery Society.3 The criteria are as follows: 1) that accurate prenatal diagnosis and staging is possible, with exclusion of associated anomalies; 2) established natural history and prognosis; 3) absence of effective postnatal therapy; 4) experimental proof of the feasibility, safety, and efficacy of in utero surgery in animal models; and 5) interventions performed in fetal treatment centers with local ethics committee approval and maternal/parental informed consent. In addition, the IDEAL (Idea, Development, Exploration, Assessment, and Long-Term Study) recommendations for surgical innovation state that preclinical studies are essential prior to first-in-human trials.4

To the best of our knowledge, several of the aforementioned criteria are not (yet) fulfilled for occipital encephalocele. First, prenatal ultrasound markers to stage severity have not yet been described or validated.5 We are unaware of data that justify the criteria for fetal surgery proposed by the authors (encephalocele volume > 10 ml, of which ≤ 20% is neural tissue). This question should therefore be first investigated to confirm that the proposed criteria are predictive of in utero progression of occipital encephalocele or serious postnatal functional deficit. Second, the natural history and time course of tissue herniation and associated brain injury of occipital encephalocele are not yet well established, and therefore the theoretical impact of such an intervention is not currently possible to determine. Although we agree with the authors that occipital encephalocele is probably a postneurulation disorder,6 it is often classified as a cranial neural tube defect. Regardless, its natural history cannot be compared with that of spina bifida aperta, as occipital encephalocele is definitely a closed defect, without direct exposure of neural tissue to the amniotic fluid, and without cerebrospinal fluid leakage. Hence, progressive in utero damage, if present, would require different underlying mechanisms.6–8 Third, we admit that current postnatal neurosurgical techniques have no established efficacy, and morbidity and mortality remain high, particularly in nonisolated occipital encephalocele. However, novel postnatal neurosurgical techniques such as expansile cranioplasty combined with cerebrospinal fluid diversion9 deserve further exploration, as they may preserve brain, improve outcome, and avoid invasive open fetal surgery. Fourth, the presented experimental technique has never been tested in animals prior to use in humans, although this would appear to be possible since several small- and large-animal models of naturally occurring and surgically induced occipital encephalocele have been described.8,10

Although we very much appreciate the authors’ effort to share their findings and strongly endorse future publication of long-term outcomes of their patient cohort, we feel that the current rationale for justifying fetal surgery for occipital encephalocele is limited.

We would like to thank Dr. De Vloo and colleagues for their comments on our clinical study that certainly will help us implement our protocol for open fetal surgery of occipital encephalocele. We would like to take this opportunity to clarify some points that probably were not so clear in our article.

Routine obstetrical ultrasound used in association with MRI has improved the prenatal diagnosis of congenital malformations and is essential in fetal medicine practice, revealing many congenital diseases and allowing for accurate antenatal diagnosis, including for encephalocele.

The pathophysiology of Chiari type II malformation is embryologically different from that of Chiari type III. However, they harbor some similarities; for example, both are related to the embryology of the occipital bone. In Chiari type II, intracranial hypotension (dry brain) causes a decrease in the volume of the posterior fossa with consequent herniation of the cerebellar tonsils and the development of obstructive hydrocephalus. In occipital encephalocele, the defect is in the bone itself, with its malformation and consequent intracranial hypotension resulting in microcephaly. These embryological events are related to the fetal moment of occurrence. The correction of myelomeningoceles after birth does not decrease the incidence of hydrocephalus because of maturation of the posterior fossa that has already occurred in the fetal stage. Similarly, microcephaly associated with postnatally repaired encephalocele does not reverse after correction due to maturation of the skull base.1,2

The medical literature is scarce regarding the perinatal outcome of fetal occipital encephalocele. One study showed that approximately two-thirds of pregnancies end with termination and the remaining one-third are associated with malformation, concluding that there is no sufficient evidence for correlation regarding prenatal ultrasound markers with stage severity in cases of encephalocele.5 Another study showed that sac volume, hydrocephalus, and the degree of neural tissue herniation may affect the prognosis of a child with occipital encephalocele, and these factors can be easily determined by prenatal ultrasound findings.6 The inherent rarity of occipital encephalocele poses a challenge in studies designed to derive a high level of evidence, when even multicenter studies include small numbers of patients.5 The best retrospective cohort available showed, using univariate analysis, that microcephaly is a prognostic factor for developmental delay.7 In our cohort of patients, the main criterion for proposing surgery was the trend for progressive microcephaly.

Regarding the volume of neural tissue, when a large amount of brain tissue is already herniated, it usually occurs through a small opening in the occipital bone, causing irreversible ischemia, gliosis, and further seizures; there is no point in protecting it. The goal of fetal surgery is to prevent progressive neural tissue herniation and microcephaly. Currently, there is no postnatal repair technique for occipital encephalocele that has proven efficacy. We hope those centers that do not terminate the gestation of fetuses with encephalocele can use the expansible cranioplasty technique for postnatal repair with acceptable morbidity and mortality to protect the herniated brain tissue, because generally many neurosurgeons sacrifice the herniated brain tissue due to an incompatible head size that cannot accommodate large amounts of brain tissue.8,9

We agree that there is no previous reference to the volume of neural tissue herniated as a marker of fetal occipital encephalocele prognosis. The volume of 10 ml was chosen based on our experience in the follow-up of patients who underwent postnatal repair of occipital encephalocele, observing the patients who developed microcephaly and refractory seizures. We followed the volume-related concept used in cases of fetal myelomeningocele in which worsening of lower-limb motor prognosis with an increase in lesion volume was shown.10

The development of animal models to study the pathophysiology of fetal diseases is a critical issue. We know that the models of cystic adenomatous lung malformation, sacrococcygeal teratoma, and intrapericardial teratoma have so far failed to simulate reality in their postnatal counterparts; however, all of these diseases have been treated using fetal surgery with a justifiable premise of treating life-threatening fetal conditions or severe potential child disability.11,12

As open fetal surgery is a new possibility for the treatment of occipital encephalocele, it is expected that the procedure would face initial rejection, mainly by medical centers that allow the termination of pregnancy, as occipital encephalocele may be associated with a greater number of genetic alterations and more severe comorbidities than those associated with myelomeningoceles. We recognize that fetal encephalocele repair was not attempted in animal models prior to attempt in humans; this may be the main fault of our study. However, now with the information that we have, we cannot withhold the results obtained, similar to the black swan phenomenon from the economic field.13

The comments provided by De Vloo and colleagues provide an important perspective regarding the paper by Cavalheiro and colleagues. They cite a consensus document from 1991 by the International Fetal Medicine and Surgery Society that provides a framework to evaluate fetal surgical procedures. Indeed, such guidelines are crucial to consider as new surgical procedures are introduced and evolve over time. However, to assume that such guidelines should remain static after three decades, or apply to all situations universally, is not entirely realistic.

I had noted that the paper under discussion had demonstrated the technical feasibility of the procedure, rather than any evidence of efficacy. Indeed, there are aspects of the paper that raise further questions that should be evaluated in a more rigorous manner. For example, the decision by the authors to choose cases in which the neural tissue volume of the encephalocele was less than or equal to 20% is clearly arbitrary, but it is based on historical observations that individuals with encephaloceles containing large amounts of brain tissue generally have a poorer outcome. One could present a hypothesis in which volume of brain tissue is a determinant of outcome, which could then be evaluated by fetal or postnatal repair. As De Vloo and colleagues point out, testing in preclinical studies is an ideal recommendation. The rodent encephalocele models in the papers they cite are interesting but unlikely to provide meaningful guidance for any future studies in humans. Indeed, if one can speculate which key outcomes would be part of a human fetal study for encephalocele, these would include cognitive and intellectual function. These types of endpoints would be difficult to assess even if a large-animal model was available.

De Vloo and colleagues raise important and valid concerns regarding the scientific premise, safety, and ethical justification for fetal treatment of encephaloceles. These viewpoints should be considered by individuals in this field and need to be directly addressed in any future studies.

Illustration showing the robotic equipment, with navigation and an electrode placed in the brain, used during robotic thermocoagulative hemispherotomy. The upper right image shows the electrode trajectory in the parasagittal section, and the lower right image shows the area of hemispheric disconnection. Artist: Sandeep Kandregula. See the article by Chandra et al. (pp 688–699). 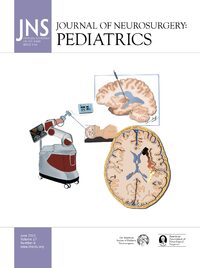