There is disagreement about the occurrence of severe traumatic brain injury, especially subdural hematoma, caused by short falls in very young children. To verify intracranial injury due to these falls and examine its characteristics, the authors compared infants and toddlers with head trauma witnessed by a nonrelative with those whose injuries were not witnessed by a nonrelative.

Subdural hematoma, retinal hemorrhage, and neurological sequelae due to short falls were not seen after witnessed falls in the present study.

There is disagreement about the occurrence of severe traumatic brain injury, especially subdural hematoma, caused by short falls in very young children. To verify intracranial injury due to these falls and examine its characteristics, the authors compared infants and toddlers with head trauma witnessed by a nonrelative with those whose injuries were not witnessed by a nonrelative.

Subdural hematoma, retinal hemorrhage, and neurological sequelae due to short falls were not seen after witnessed falls in the present study.

Head trauma is a leading cause of emergency department visits for young children.1 The major cause of this head trauma is short falls, such as a fall from a couch or bed, or falling while pulling to a standing position.2 Many studies have stated that falls from less than 3–4 feet seldom cause severe head injury;3–6 however, we have encountered pediatric cases with severe head injury even though the history of injury obtained from the caregiver was supposedly a mild cause.

Among head trauma in infants and young children, inflicted brain injury is the leading cause of neurological sequelae and death.7 Severe head injury, particularly subdural hematoma (SDH), with a history of a short fall is deeply concerning for abusive head trauma (AHT).8,9 Although many studies have stated that severe head injury due to a short fall is very unlikely3–6 and the reliability of the history obtained from the caregivers may be low in severe head injury,10,11 several studies have reported that short falls could cause SDH.12–16 Despite the fact that many studies have reported findings suggesting AHT, such as SDH, retinal hemorrhage, and cerebral edema,8,9,17–20 these findings are not considered the gold standard.21 Moreover, most AHT studies have a problem of circularity bias because the diagnosis of AHT and accidental trauma is based on these findings.22 The diagnosis of AHT remains challenging, and we sometimes face a challenge determining whether the infants or young children have sustained an intracranial injury (ICI) from an unfortunate accident or as a consequence of abuse.

We retrospectively reviewed the clinical records of children younger than 2 years with head trauma due to short falls who visited the emergency department of the National Center for Child Health and Development in Japan between April 2015 and March 2018. We excluded children with hemorrhagic or bone diseases, those taking antiplatelet agents or anticoagulant agents, and cases lacking information about the location where the children were injured.

We compared age in months, sex, mechanism of injury, fall height, prevalence rate of ICI, skull fracture, type of traumatic brain injury (SDH, epidural hematoma [EDH], subarachnoid hemorrhage [SAH], and brain edema), retinal hemorrhage, rib or long-bone fracture, and outcomes between patients whose falls were witnessed by a nonrelative and those for whom the fall was not witnessed by a nonrelative. Additionally, we compared the available head CT scans between the groups.

The information about the accident site was primarily determined by the history given by the caregivers to a physician in the emergency department. In cases with inconsistencies between the history and the severity of injury, we additionally verified the history by hearing from the caregivers. Patients whose trauma occurred in a private space, but with a nonrelative witness, were classified as having a fall witnessed by a nonrelative. A short fall was defined as a fall from less than 3 feet, falling from a standing or sitting position, and other minor head trauma (e.g., being struck by a toy, bumping against the wall). A fall from a shorter adult’s arm and a fall from a stationary bicycle child seat were defined as a fall from less than 3 feet. A fall from a taller adult’s arm was defined as a non–short fall because the fall height from a taller adult’s arms would be greater than 3 feet. A shorter person’s falling while the child was being carried and a stationary bicycle’s falling while the child was sitting in the child seat were defined as other minor head trauma. In stairway falls, 1 step was defined as 20 cm. The mechanism of injury was divided into fall (a fall or vertical fall), falling from a standing or sitting position, and other. Neurological sequelae (Pediatric Cerebral Performance Category ≥ 2)24 at 6 months after trauma and death were measured as outcomes.

At our institution, head CT scanning is performed according to the Pediatric Emergency Care Applied Research Network head trauma prediction rules.1 The children who are characterized as being at intermediate risk and do not undergo a head CT scan are observed in the hospital for several hours and revisit our emergency department the following day. In addition, we ask all caregivers of the patients after head trauma to return to the hospital when the patients have symptoms. All imaging findings were assessed by a radiologist.

All statistical tests were two-sided, and an α level of 0.05 was considered to indicate significance. All data analyses were performed using IBM SPSS statistical software version 24 (IBM Corp.).

Demographics and mechanism of injury in the study population

The present study retrospectively examined the records of 1494 patients younger than 2 years with head trauma due to short falls and compared the children who had head trauma occurring with and without witness by a nonrelative. We found that, although low in frequency, ICI and skull fracture can occur in short falls and that there are no differences in the prevalence rate of ICI and skull fracture between witnessed falls and falls not witnessed by a nonrelative; however, children with SDH, retinal hemorrhage, or neurological sequelae were not observed in the falls that were witnessed by a nonrelative.

Many studies over the past several decades have reported that no serious injuries occur in children who fall from less than 3–4 feet,3–6 and a systematic review reported that the mortality rate for a fall from less than 5 feet was less than 0.5 deaths per 1 million young children per year.3 On the other hand, several studies have reported that there are children with SDH due to short falls who could have retinal hemorrhage.12–16 Although a case series reported in 2018 provided information about an investigation of AHT,12 the investigation of AHT was not conducted in a case series reported in 1984,13 and two single case reports and one case series have insufficient information about the exclusion of AHT.14–16 Additionally, a systematic review reported that there was insufficient evidence with which to assess the accuracy of the triad of SDH, retinal hemorrhage, and encephalopathy, which has been described as being specific to shaken baby syndrome, while attempting to identify inflicted shaking.25,26 Although this report has been used for legal defense arguments, the report has received much criticism for using incorrect methods.27–31 There are arguments against the diagnosis of AHT in clinical practice and the courts; however, there is weak evidence for severe SDH due to short falls.

Many AHT studies have been conducted. We all are likely to run into a problem of misclassification and circular reasoning when we conduct a study in which children were divided into AHT and accidental head trauma and the two groups were compared.22 In the present study, children were objectively classified according to the site of an accident to reduce the risk of misclassification and circular reasoning. Because of a lack of a confession or accusation of AHT, it is difficult to conclude that SDH in falls not witnessed by a nonrelative is AHT. However, in the objective classification, the findings of occurrence of SDH, retinal hemorrhage, and neurological sequelae only in the absence of a nonrelative witness may be important.

The current study has several limitations. First, this study divided children into groups based on whether or not the fall was witnessed by a nonrelative. There are cases in which the presence or absence of a nonrelative witness could not be substantiated. However, the nonrelative witnesses were examined in detail among cases with SDH resulting from suspected AHT; therefore, there were no cases with SDH in the presence of a nonrelative witness in the present data. Second, CT scans were obtained only in some patients. Although we have conducted head CT scans according to the criteria and adequately followed up the patients, there may have been asymptomatic SDH among those who did not undergo imaging. Additionally, although more than 90% of patients with ICI underwent fundoscopy and a skeletal survey, the rate of patients who underwent these evaluations was small among the eligible patients. Third, age distribution, characteristics of the surface on which the patient fell, and other aspects were not closely similar between the two groups. These differences have an ambiguous effect on outcomes. Finally, this study investigated cases from one institution over a limited period. Because of the limited number of cases, the data could not disprove the existence of SDH due to short falls. 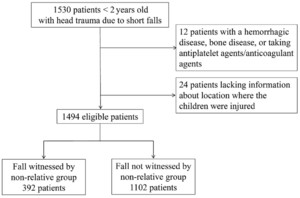