Using published definitions of cistern scarring and aqueduct patency, 7 neuroendoscopists with training from Dr. Warf in Uganda and 7 neuroendoscopists who were not trained by Dr. Warf rated cistern status from 30 operative videos and aqueduct patency from 26 operative videos. Interrater agreement was calculated using Fleiss' kappa coefficient (κ). Fisher's 2-tailed exact test was used to identify differences in the rates of agreement between the Warf-trained and nontrained groups compared with Dr. Warf's reference answer.

Regardless of training with Dr. Warf, all neuroendoscopists could identify scarred cisterns and aqueduct patency with similar reliability, emphasizing the strength of the published definitions. This makes the identification of this risk factor for failure generalizable for surgical decision making and research studies.

Using published definitions of cistern scarring and aqueduct patency, 7 neuroendoscopists with training from Dr. Warf in Uganda and 7 neuroendoscopists who were not trained by Dr. Warf rated cistern status from 30 operative videos and aqueduct patency from 26 operative videos. Interrater agreement was calculated using Fleiss' kappa coefficient (κ). Fisher's 2-tailed exact test was used to identify differences in the rates of agreement between the Warf-trained and nontrained groups compared with Dr. Warf's reference answer.

Regardless of training with Dr. Warf, all neuroendoscopists could identify scarred cisterns and aqueduct patency with similar reliability, emphasizing the strength of the published definitions. This makes the identification of this risk factor for failure generalizable for surgical decision making and research studies.

Hydrocephalus is a disorder of CSF circulation that causes increased intracranial pressure. Traditional treatment for this condition involves CSF diversion with a shunt that diverts CSF from the head to a distal absorptive space (e.g., peritoneum, pleura, atria). Unfortunately, shunts carry a risk of infection and shunt failure, often requiring multiple revisions over a patient's lifetime. Studies have found that up to 84.5% of patients require at least 1 shunt replacement and 4.7% require 10 or more over the course of 17 years.7 An ideal hydrocephalus procedure provides long-term control while minimizing surgical interventions.

Endoscopic third ventriculostomy (ETV) with choroid plexus cauterization (CPC) is an evolving therapy for hydrocephalus in young children and an alternative to shunting.7,11 Factors associated with success have consistently been age, etiology of hydrocephalus, previous shunting, and cisternal scarring; aqueduct patency may also be related to success.11,12 Age, etiology, and previous shunting are objectively defined. Cisternal scarring and aqueduct patency are subjectively defined and require surgeons to visually rate the cistern as clean or scarred and the aqueduct as open or closed. In Warf et al.'s studies, these endoscopic findings were specifically defined.11,12 For the purposes of training new surgeons to perform ETV/CPC and researching predictive factors, the reliability of surgeons to identify these findings must be defined. Additionally, the generalizability of these definitions was studied by comparing the ability of surgeons who trained with Warf to surgeons who perform endoscopy but have not trained with Dr. Warf. This study tested the interrater reliability of these 2 groups of surgeons in identifying cisternal scarring and aqueductal patency using Warf's definitions.

A total of 30 cistern videos and 26 aqueduct videos were chosen. Each video clip was approximately 10 seconds long. For the cistern videos, the clip was edited to include views of the fenestrated third ventricle floor and then a view “through” the ventriculostomy showing the basilar cistern space. For the aqueduct videos, a reflexed view with a flexible scope was undertaken to allow a magnified, unobstructed view of the aqueduct ostium. There was no attempt to advance the scope through the aqueduct. For each of these video clips, the viewer had the ability to rewind and view each clip as many times as needed.

The “trained” group of raters included North American neurosurgeons with an interest in endoscopy who traveled to Uganda to learn the technique from Dr. Warf. These trained surgeons had on average performed 12 ETV/CPC procedures while in Uganda. Surgeons spent an average of 5 operative days in Uganda under direct supervision and instruction from Drs. Warf, John Mugamba, and/or Peter Ssenyonga. Upon return to their practices, each surgeon incorporated ETV/CPC into his/her routine procedures, which were performed an average of 1.5 times per month by each surgeon. Each surgeon had been performing ETV/CPC for an average of 1.5 years. The “nontrained” group of raters was a group of neurosurgeons who had an interest in endoscopy but had not learned techniques directly from Dr. Warf. Among the nontrained group, only 1 surgeon works in a center where ETV/CPC is routinely performed. Each rater was blind to the findings of the other raters. There were 15 raters: 7 trained, 7 nontrained, and Dr. Warf.

Raters were asked to determine if cisternal scarring or aqueductal stenosis were present as defined by Warf et al.12 For the purposes of this study, a “scarred cistern contains anything more than typical strands of normal-appearing arachnoid. Once the Liliequist membrane is fenestrated, thickened membranes that even partially obstructed free passage of the endoscope into the cistern are considered to consist of scarring”12 (Fig. 1). To determine aqueduct status, raters were provided with the following definition: “open is defined as clearly open or narrowed, closed is defined as clearly closed or a pinhole that is functionally obstructed” on direct inspection of the ostium without entering the aqueduct with the endoscope, which is consistent with the initial description and categorization of Warf et al.12 In this original description, the aqueduct was categorized as open, narrowed, or closed, but with the statistical analysis they were reclassified into 2 ratings: open or closed. In private correspondence, Dr. Warf explained that the narrowed aqueducts were considered closed if the aqueduct was “pinhole” or “functionally closed” (Fig. 2). Because of the need to use 2 ratings, this definition was used.

Each individual rater was sent an email link to surveys from Survey Monkey (www.surveymonkey.com; SurveyMonkey Inc.). None of the raters had access to any of the other raters' responses. To complete the survey, all raters had to respond to the entirety of the survey. The video clips were provided in a separate email link that was securely posted on Dropbox (Dropbox Inc.). For the presented video clips, all were recorded from ETV/CPC procedures that used equipment manufactured by the Karl Storz Co. and included a flexible endoscope (model 11282 BN; Karl Storz Co.). Video editing was performed using Final Cut Pro (Apple).

Fleiss' kappa coefficients for all raters, trained raters, and nontrained raters for both aqueduct patency and cistern status*

Using Dr. Warf's assessment of cistern scarring and aqueduct patency as the reference answer, only 1 cistern video (Video 28) showed a statistically significant difference in the degree of disagreement between the trained and nontrained groups by the Fisher's exact test (p = 0.021). Comparing the videos grouped together by cistern or aqueduct status, as determined by Dr. Warf's reference answer, there was no statistically significant difference between the trained and nontrained groups (p > 0.05) (Fig. 3).

In this study, raters were given specific definitions for cistern scarring and aqueduct patency, and, regardless of training, the endoscopic surgeons reliably identified aqueduct patency with substantial agreement and cisternal scarring with moderate agreement based on Fleiss' kappa coefficient.5 This indicates that the definitions provided by Warf et al.11,12 are generalizable for endoscopic surgeons irrespective of additional training.

Cistern scarring has consistently been found to be a risk factor for ETV/CPC failure.6,7,11,12 This includes patient populations in both Africa (where infectious meningitis is the most common cause of scarring)9 and North America (where intraventricular hemorrhage of prematurity is the most common cause of scarring).4 In both of these etiologies, Warf et al. identified scarring during the endoscopic inspection of the cisterns and found that it was correlated with failure.11,12 It is not clear if other surgeons would be able to reliably identify the same intraoperative findings.

It is important to ensure that surgeons can reliably identify scarring in order to guide intraoperative decision making about possible shunting and postoperative counseling of families. Additionally, the reliability of identifying scarred cisterns is important for studying ETV/CPC in clinical studies; otherwise the conclusions from studies will not be valid. As the technique becomes more widespread, surgeons who have not trained with Dr. Warf will be performing these procedures. It is important to know that the definitions can reliably guide operative decisions regarding scarring.

The ability of surgeons to identify scarred cisterns is moderately reliable, with a κ of 0.536 (CI 0.501–0.571). While this is a relatively high level of reliability, there is potential room for improvement using other modalities to evaluate scarring. One disadvantage of intraoperative inspection is that surgery is required before the treatment decision can be made. Ideally, a patient's cistern status would be known before surgery, and the surgeon and family may alternatively choose to proceed with a shunt. Warf et al. reported in a small case series that on sagittal, balanced, steady-state, gradient-echo sequences (FIESTA, TrueFISP, CISS, bFFE) scarring could be identified and correlated with ETV/CPC failure.11 A potential direction of future research would be to determine if MRI could provide more reliable identification of cisternal scarring and preoperatively shape decision making.

Closed aqueduct status correlates with ETV/CPC success in 1 study,12 but other studies have not had similar findings.7,8,10,11 This is surprising considering the high level of success that is correlated with ETV alone in patients with aqueductal stenosis and potentially indicates other important physiological changes that occur with the combination of ETV and CPC.3,13 While the identification of aqueductal stenosis can be obtained with cranial imaging, to date there are few studies that have looked at how intraoperative aqueduct ostium inspection compares with the findings on noninvasive imaging, especially in those aqueducts that are obstructed and functionally closed versus clearly open.9 Our study indicates that regardless of endoscopic training, the application of Dr. Warf's definition for aqueduct patency can be applied with substantial agreement between raters consistently in the intraoperative setting. This high level of reliability allows for endoscopists in settings without readily available imaging to make intraoperative assessments that may affect their decision making.

An assumption of this study is that an edited, shortened video is a valid representation or reenactment of the endoscopy experience, thereby allowing the rater to analyze and rate the status of the cisterns and aqueduct as they would if they were performing the endoscopy themselves. Certainly, this representation should be more valid than still pictures; however, it is possible that unedited video (while exhaustingly long to watch and rate) may be more valid. Also, it is possibly only valid when the rating endoscopic surgeon is controlling the scope and making observations while navigating the scope. Of note, as demonstrated in Fig. 3, both groups often differed from Dr. Warf's ratings. Although the raters were relatively reliable in rating the cisterns and aqueducts when compared with Dr. Warf as the gold standard (Fig. 3), both groups of raters often differed from Dr. Warf. This could represent us having a reliable rating system, but it questions the validity. Because the outcomes of the ETV/CPC procedures could not be linked to the videos, the validity could not be confirmed. It is certainly possible that Dr. Warf's ratings of the videos were a representation of his experience more than a strict adherence to the definitions.

Representative photos from the intraoperative ETV/CPC procedures. A scarred cistern (left) showing thickened membranes that obstruct the passage of the endoscope into the basilar cistern. An unscarred cistern status (right) is shown for comparison. Note the lack of adhesions or membranes obstructing the operator's view. Figure is available in color online only.

Representative photos from the intraoperative ETV/CPC procedures assessing aqueduct patency. An open aqueduct (left) as seen by the surgeon compared with a closed aqueduct (right). Figure is available in color online only. 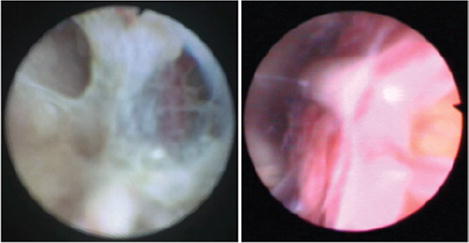 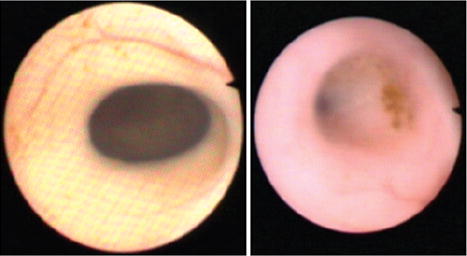 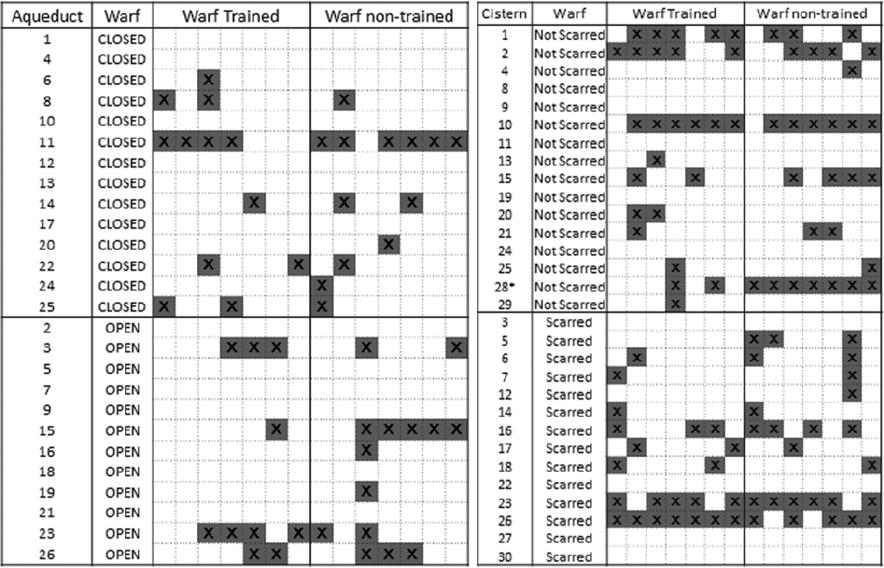