When a baby with a meningomyelocele is born, the ideal approach is to close the meningomyelocele sac and treat accompanying pathologies, if any, within the first 24 hours.4,7 Early and late complications after meningomyelocele surgery are closely associated with wound dehiscence. Cerebrospinal fluid leakage is a common complication following meningomyelocele surgery during the wound-healing period.4 Hyponatremia related to CSF leakage has been reported to occur in preterm infants following external ventricular drainage to treat posthemorrhagic hydrocephalus.8 Hyponatremia can lead to adverse neurodevelopmental outcomes in the newborn period.11 It is a serious complication, especially in neurosurgery patients because it can give rise to additional problems such as cerebral edema, altered mental status, and vasospasms.13 Herein, we describe the case of a newborn child with absence of suckling behavior who was admitted on the 14th day (postnatal day 15) after meningomyelocele surgery with a CSF leak and severe hyponatremia (serum sodium level 104 mEq/L).

A 15-day-old girl was admitted to the emergency department with drowsiness and decreased suckling for 3 days. The meningomyelocele surgical incision site had opened 3 days earlier, and the girl’s suckling behavior had decreased gradually thereafter. The drowsiness had begun 2 days before admittance. According to the prenatal history, the infant was born to a 28-year-old mother (fourth pregnancy) via the normal vaginal route in the 40th gestational week. The infant had a birth weight of 2830 g, and her parents had third-degree consanguinity. All the other siblings were healthy.

The patient had undergone surgery for a lumbar meningomyelocele in our hospital on the 1st postnatal day. According to the hospital records, her head circumference was 34 cm (25th–50th percentile). She had a full blood count preoperatively, and the results of serum electrolyte, liver, and kidney function tests were all within the normal ranges. The lateral ventricles were shown to be slightly dilated in the occipital area on a preoperative cerebral CT scan and on a CT scan obtained on postoperative day 3. Millimeter-sized dense hemorrhage foci were seen in the 3 ventricle walls (Fig. 1A and B). According to the operative records, duraplasty was performed by bilaterally dissecting the dorsolumbar fascia after excising a 6 × 6–cm meningomyelocele, and the skin folds were primarily sutured. The patient had been discharged on the 7th postnatal day with a clean wound site and was on full enteral feeding. She was scheduled to attend an outpatient visit in the clinic 3 days after discharge.

Physical examination revealed the following: body weight of 2300 g (below 3rd percentile), head circumference of 34.5 cm (25th–50th percentile), body temperature of 36.2°C, pulse of 136 beats/minute, respiratory rate of 50 breaths/minute, and blood pressure of 56/35 mm Hg. The patient had a cachectic, hypotonic, and lethargic appearance. A break of 4 × 5 cm in the incisional site was observed, in addition to a yellow, aqueous discharge (Fig. 2 upper). The anterior fontanelle measured 2 × 2 cm, with normal bulging. Tonus and movements of the lower extremities were decreased. The findings of all other system examinations were normal.

Laboratory investigations revealed severe hyponatremia (serum sodium level 104 mEq/L) and hypochloremia (serum chlorine level 71 mEq/L). The other laboratory findings were as follows: potassium 6.1 mEq/L; blood urea nitrogen 53 mg/dl; creatinine 0.7 mg/dl; and uric acid 11 mg/dl. A complete blood count and C-reactive protein values were normal. In the urinalysis, the urine density was 1006, and urine sodium, which was measured twice, was < 20 mmol/L. Serum levels of cortisol and ACTH were normal, and findings on renal and cranial ultrasound examination were normal.

The patient was given 140 ml/kg/day of fluid based on her birth weight and 12-hour sodium deficit therapy to increase the sodium value by 10 mEq/L. After collecting blood and wound cultures, treatment was initiated with cefotaxime and vancomycin. After 12 hours, the patient’s sodium level was 113 mEq/L. Over the next 24 hours, sodium-deficit therapy was administered again to raise the sodium level by 10 mmol/L. The control sodium value was 127 mEq/L. Escherichia coli was isolated from the wound culture. Based on the patient’s antibiogram, cefotaxime was stopped, and the patient received meropenem. Over the following days, the CSF leak continued at a rate of approximately 100–120 ml/day; this was measured by weighing the sterile pads on which we closed the lesion 3 times a day. Hydrocephalus was not observed on CT scans (Fig. 1C), although the CSF leakage continued. The patient received full enteral feeding. Additional sodium support (20–25 mEq/day) was provided, with 3% sodium chloride solution added to the enteral feeding solution. Wound dressing continued with rifampicin and nitrofurazona pomada. Vancomycin therapy was continued for 10 days, and meropenem was given for 14 days. Subsequently, prophylactic cefotaxime was initiated. At the end of this period (on postnatal day 33), the patient’s CSF leakage was significantly reduced. Serial ultrasound measurements obtained during this period revealed no findings indicative of hydrocephalus, such as an abnormal increase in head circumference. The patient was followed up by the plastic surgery and neurosurgery departments. The skin defect was closed on postnatal day 52 (Fig. 2 lower). A small CSF leak from the suture site continued after the operation, and the patient developed hydrocephalus on day 58 (Fig. 1D). A ventriculoperitoneal shunt was placed. Sodium support was discontinued, and the CSF leak resolved after the shunt insertion. Serum sodium levels remained stable, and the patient was discharged.

Hyponatremia is defined as a serum sodium level below 133–135 mmol/L. It has a reported incidence of 25%–65% in newborns admitted to the intensive care unit.9,13 Hyponatremia accompanying primary disease is associated with adverse outcomes in all age groups. It is seen in about half of neurosurgery patients, and the cerebral effects of hyponatremia can increase the rate of complications such as convulsions, cerebral edema, altered mental status, and vasospasms.2,13

The 2 most common causes of hyponatremia in neurosurgery patients (especially those with traumatic brain injury or subarachnoid hemorrhage, as well as those who have undergone transsphenoidal pituitary surgery) are inappropriate antidiuretic hormone secretion and cerebral salt loss, in contrast to hyponatremia associated with CSF loss, which has rarely been reported. After meningomyelocele surgery, CSF leakage and wound site infections are a common complication during the healing period, with a general incidence of 2%–5.3%.5,7,12 Patients with a large defect accompanied by hydrocephalus or Arnold-Chiari malformation are at a higher risk of CSF leakage.4,7,14

Primary closure is often insufficient to repair a large meningomyelocele. The advancement flap technique is applied in the repair of these defects to reduce tissue tension in the postoperative period.7 After meningomyelocele repair, the infant should be closely monitored for the development of hydrocephalus. In the presence of findings of raised intracranial pressure, ventriculoperitoneal shunting or an alternative method of CSF diversion should be performed. This procedure protects the brain from the effects of progressive ventricular dilation, reduces high dural sac pressure, and prevents the risk of a postoperative CSF leak from the recently repaired defect. In cases of a concomitant meningomyelocele and hydrocephalus, simultaneous ventriculoperitoneal shunting and repair of the defect are recommended. Watertight dural closure, together with the maintenance of the patient in a prone position, can reduce the risk of CSF leakage from the wound.10

In the present case, although the patient’s sodium level returned to normal after initiation of sodium-deficit therapy, the patient required an additional 20–25 mmol/day of sodium during the period because of the CSF leak. The patient was receiving full enteral feeding, and the sodium was added to the enteral solution. The patient developed hyponatremia when sufficient sodium support was not provided. Hyponatremia associated with CSF loss, in addition to an increased need for sodium, has been previously described in preterm newborns who underwent external ventricular drainage to treat posthemorrhagic hydrocephalus.8 Life-threatening dehydration and hyponatremia have been reported in children undergoing external ventricular drainage for different reasons.15,16 In addition, hyponatremia associated with CSF loss has been reported in a 3-year-old child following ventriculoperitoneal shunt placement for an abdominal CSF pseudocyst and in an 18-month-old infant with rhinorrhea.1,6

The sodium content of CSF varies between 135 and 150 mmol/L. Daily CSF loss of 100 ml causes sodium loss of 14 mmol. This amount exceeds the daily sodium intake (6 mmol) of a newborn receiving 600 ml of breast milk (mean sodium content 0.74 mmol/dl) or term infant formula (sodium content 0.78–0.87 mmol/dl). Based on the present case and on previously reported cases,1,6,15,16 CSF loss may cause severe hyponatremia, particularly in the newborn and early infancy periods when dietary sodium content is relatively low. The sodium content of standard maintenance fluids in this age group is about one-fourth to one-fifth of 0.9% saline, which cannot compensate for sodium loss through a CSF leak. In patients with limited oral intake, intravenous replacement therapy with 0.9% saline (to which 5 mmol/L KCl may be added) should be administered independently of maintenance fluids.

While hyponatremia accompanying primary diseases causes adverse outcomes in all age groups, it is associated with growth retardation, neurodevelopmental problems, and hearing loss in newborns.3,11 Therefore, serum sodium levels in infants with CSF loss for any reason should be closely monitored, even if the individuals are receiving full enteral nutritional. The sodium needs of infants may be increased two- to threefold compared to an infant without a CSF leak, depending on the amount of CSF leakage. 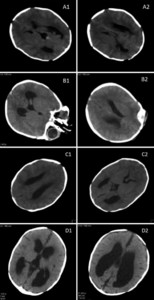 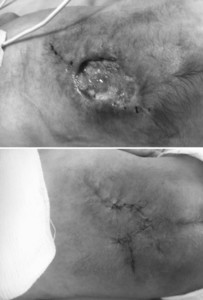