En bloc resection of ligamentum flavum with laminotomy of the caudal lamina in the minimally invasive laminectomy: surgical anatomy and technique

An analysis of a single surgeon’s experience managing 147 consecutive patients with lumbar stenosis who underwent single-level lumbar hemilaminectomies over a 4-year period was performed. Patients were managed with either piecemeal resection (cohort 1) or en bloc resection with a laminotomy beyond the caudal insertion (cohort 2) of the ligamentum flavum.

Seventy-seven patients underwent piecemeal resection (cohort 1), and 70 underwent en bloc resection (cohort 2). There were 5 CSF leaks (6.4%) in cohort 1. There were no CSF leaks in cohort 2. There was a statistically significant difference in operative times between the two groups (p = 0.04), but there was no statistically significant difference in patient-reported outcomes at 6 months between the groups.

An analysis of a single surgeon’s experience managing 147 consecutive patients with lumbar stenosis who underwent single-level lumbar hemilaminectomies over a 4-year period was performed. Patients were managed with either piecemeal resection (cohort 1) or en bloc resection with a laminotomy beyond the caudal insertion (cohort 2) of the ligamentum flavum.

Seventy-seven patients underwent piecemeal resection (cohort 1), and 70 underwent en bloc resection (cohort 2). There were 5 CSF leaks (6.4%) in cohort 1. There were no CSF leaks in cohort 2. There was a statistically significant difference in operative times between the two groups (p = 0.04), but there was no statistically significant difference in patient-reported outcomes at 6 months between the groups.

The Spine Patient Outcomes Research Trial (SPORT) analysis on the surgical versus nonoperative treatment for lumbar spinal stenosis confirmed what spine surgeons have intuitively known for decades: Lumbar laminectomy for the management of symptomatic lumbar stenosis refractory to nonoperative management is one of the most reliable operations in a spine surgeon’s armamentarium.1,2 The SPORT study also confirmed that the rate of inadvertent durotomy was as high as 9%, consistent with other reports in the literature of similar rates ranging from 7% to 10%.1,3,4 Although several large studies have shown that an inadvertent durotomy does not affect long-term outcomes, it remains a complication that surgeons prefer to avoid under any circumstance.4,5

The purpose of this work is to present the surgical technique and a comparative analysis of patients who underwent piecemeal resection versus those who underwent the modified technique with en bloc resection.

An institutional review board approved this retrospective analysis of 147 patients who underwent a single-level minimally invasive hemilaminectomy performed by a single surgeon from September 2014 through April 2018. All patients presented with neurogenic claudication with or without a radicular component and demonstrated moderate to severe lumbar stenosis at one segment in the lumbar spine on sagittal and axial MRI. All patients had symptoms refractory to exhaustive nonoperative measures, which included a 6- to 12-week trial of epidural steroid injections and physical therapy. Patients with spondylolisthesis without evidence of instability on flexion and extension radiographs were included in this study. Patients who had undergone previous microdiscectomies or previous laminectomies at the symptomatic level were not included in this study. Patients with spondylolisthesis who had evidence of instability on flexion-extension radiographs were also not included. This study did not include patients needing treatment at 2 or more levels.

With the patient positioned prone on a Jackson table atop a fully expanded Wilson frame, an 18-mm incision was planned for a 16-mm access port with fluoroscopic guidance. An incision was made 20 mm from the midline, the fascia was divided, and a series of dilators were passed onto the lamina, followed by placement of a 16-mm minimal access port with a medial angulation of 15° to 20° as previously described by Khoo and Fessler7 and Boukebir et al.8 The target for the first position of the access port was the rostral insertion of the ligamentum flavum, as seen in Fig. 1.

Seventy-seven patients underwent the piecemeal resection technique (cohort 1), and 70 underwent the en bloc resection technique (cohort 2). The demographic and operative data for these patients are detailed in Table 1. The outcome data (ODI, VAS-back, and VAS-leg scores) are detailed in Table 2. Germane to this report is the incidence of incidental durotomies reported in Table 3. Cohort 1 had 5 such events (6%), whereas there were no incidental durotomies in cohort 2 (0%). No statistically significant difference surfaced in the outcome measures between cohorts 1 and 2, which is consistent with the reports in the literature concluding that CSF leaks did not affect outcomes.4,5 There was a statistically significant difference in operative time between the two cohorts (p = 0.04), but that difference did not remain when the 5 incidental durotomies were removed from the statistical analysis. Therefore, the additional time to address the durotomy explains the difference between the two operative times. There was also a statistically significant difference in length of stay, with cohort 1 averaging 23.4 hours (range 4–48 hours) and cohort 2 averaging 14.6 hours (range 3–28 hours). All patients who underwent durotomies were admitted for overnight observation. There was 88% follow-up at 1 year for cohort 1. Three patients in the original cohort of 77 required further surgery, 2 required further decompression and fusion at the same level as their laminectomy, and 1 required a laminectomy at L3–4 above their index surgery. There was 94% follow-up at 1 year for cohort 2. Two patients from that cohort required additional surgery; 1 required a microdiscectomy at L5–S1 below their laminectomy, and 1 required a laminectomy one level above L3–4. At the most recent follow-up, there were no conversions to fusions in cohort 2.

Values represent the number of patients (%) unless stated otherwise.

In a 1982 commentary on a technical note by Lin, Weinstein identified the superior aspect of the rostral lamina as the area most susceptible to incidental durotomy during a lumbar laminectomy.9 Weinstein stated,

The rostral laminar edge is the site of greatest midline stenosis, especially in patients with a relatively vertical orientation of the laminar arch. The dura mater is often thinned when the sac has been compressed chronically, and considerable caution would be appropriate to avoid dural laceration while undercutting the anterosuperior edge of the lamina….

The 5 incidental durotomies that occurred in the piecemeal resection cohort in this series all occurred while manipulating a Kerrison rongeur to release the ligamentum flavum in precisely the area where Weinstein advised surgeons to take the greatest caution. Complication avoidance is the central tenet of any surgical technique. When the same complication recurred in the same anatomical area again and again, reconsideration of the technique for decompression of the caudal aspect of a segment and removal of the caudal insertion of the ligamentum flavum was indicated. Anatomical analysis of the well-reported anthropometric measurements of the lumbar canal ultimately led to the technique described in this work.

It would be unrealistic to expect the en bloc technique to eliminate the risk of a CSF leak in a lumbar laminectomy. The numbers in the series reported herein are relatively small, and it will only be a matter of time before future events, specifically incidental durotomies, will balance, to some extent, the apparent deviation from the incidence of CSF leaks reported in the literature. Despite these inevitable events, the question is whether the overall incidence has the potential to be lower by fully recognizing and avoiding the most constrained diameter of the canal and working beyond it. The incidence and consequence of incidental durotomies reported in the literature do not identify anatomically where these events occurred.1,4,5,10 It would be helpful to know precisely where they occurred to confirm the hypothesis that they occurred in the most constrained cross-sectional area of the lumbar canal that increases the risk of an incidental durotomy, as observed by Weinstein in 1982.9

There are two additional points to the en bloc technique that are worthy of mention. First, release of the insertions of the ligamentum flavum decreases the total number of actuations of the Kerrison rongeur needed and maintains a protective covering over the top of the dura throughout nearly the entire operation. Focusing on the insertion points also decreases the overall time of surgery. Second, maintaining the ligamentum flavum intact for nearly the entire procedure prevents the inevitable expansion of the thecal sac that occurs in a piecemeal decompression. As the thecal sac expands, it increases the risk to the dural edge by creating an even greater distance between the dural edge that has been decompressed and the dural edge that remains to be decompressed. Maintaining the thecal sac in the compressed state until all of the insertion points have been released prevents this circumstance.

The retrospective nature of this report and the single-surgeon application of this technique are the main limitations of this report. Furthermore, this report did not include patients with previous microdiscectomies or laminectomies at the same level. An evaluation of the en bloc technique by multiple surgeons comparing the incidence of CSF leaks before and after would be needed to determine the impact this technique has on the incidence of incidental durotomies in patients undergoing lumbar laminectomy.

En bloc resection of the ligamentum flavum via a laminotomy at the caudal lamina decreased the risk of CSF leakage by allowing the surgeon to work beyond the most constrained diameter of the lumbar canal to release the caudal insertion of the ligamentum flavum. The en bloc resection technique reduces the number of Kerrison rongeur actuations and maintains a protective barrier over the thecal sac for nearly the entire procedure.

I thank the staff of Neuroscience Publications at Barrow Neurological Institute for assistance with manuscript and video preparation and Kevin Gosselin, PhD, for performing the statistical analysis.

Dr. Tumialán reported being an investor in LessRay, TrackX, Durastat, and Fusion Robotics and receiving royalties from Globus during the conduct of the study.

Portions of this work were orally presented at the University at Buffalo, Getzville, New York, Grand Rounds, July 28, 2022, and the Brazilian Neurosurgical Society Meeting in São Paulo, Brazil, August 4, 2022.

Lateral fluoroscopic image demonstrating the target for the access port that encompasses the rostral insertion point of the ligamentum flavum for an L4–5 laminectomy. A: Lateral fluoroscopic image demonstrating spinal needle in position. B: Artist’s rendering of the ligamentum flavum on the fluoroscopic image. C: Position of the access port at the base of the spinous process. Such a position allows undercutting the spinous process and reaching the contralateral recess. Used with permission from Barrow Neurological Institute, Phoenix, Arizona.

The various dimensions of the lumbar canal. Using the anthropomorphic measurements reported by Panjabi et al.,6 a computer-generated model illustrates the varying diameters of the lumbar canal from L3 to L5. Left: The superior-most aspect of the lamina represents the most constrained dimension (magenta ring), whereas the caudal aspect of the lamina presents a larger dimension (turquoise ring). Right: The cross-sectional areas of the lumbar spine of the Panjabi model illustrate the displacement of the thecal sac with a number 2 Kerrison rongeur in the most constrained corridor (magenta ring) compared with the larger diameter (turquoise ring). Used with permission from Barrow Neurological Institute, Phoenix, Arizona. 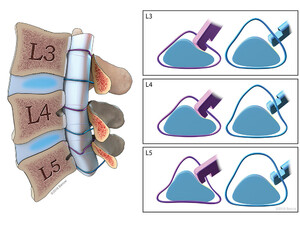