The purpose of this retrospective, single-institution study was to evaluate radiological and clinical outcomes of patients managed with repeat stereotactic radiosurgery (SRS) for residual cerebral arteriovenous malformation (AVM) after prior SRS.

The authors evaluated the clinical and radiological outcomes of consecutive patients treated with repeat single-session SRS for a residual brain AVM from 1989 to 2021.

Repeat SRS is a reasonable therapeutic option, in particular for patients with residual AVM. Repeat SRS was associated with more favorable outcomes in adult patients and those with residual AVM smaller than 20 mm in maximum diameter. To increase the rate of residual AVM obliteration, a prescription dose ≥ 19 Gy should ideally be used for repeat SRS.

The purpose of this retrospective, single-institution study was to evaluate radiological and clinical outcomes of patients managed with repeat stereotactic radiosurgery (SRS) for residual cerebral arteriovenous malformation (AVM) after prior SRS.

The authors evaluated the clinical and radiological outcomes of consecutive patients treated with repeat single-session SRS for a residual brain AVM from 1989 to 2021.

Repeat SRS is a reasonable therapeutic option, in particular for patients with residual AVM. Repeat SRS was associated with more favorable outcomes in adult patients and those with residual AVM smaller than 20 mm in maximum diameter. To increase the rate of residual AVM obliteration, a prescription dose ≥ 19 Gy should ideally be used for repeat SRS.

Cerebral arteriovenous malformations (AVMs) occur with a prevalence of 18 per 100,000 adults,1 and they have an overall annual hemorrhage risk of approximately 2%–3%. Stereotactic radiosurgery (SRS) is a favorable alternative to resection for the management of cerebral AVM, particularly when the perceived risk of resection outweighs the potential benefits owing to AVM location and angioarchitecture and patient comorbidities and for patients unwilling to undergo surgery. SRS can be used as an upfront treatment or as a salvage therapy after incomplete resection or embolization. However, AVM remains in 20%–50% of patients 3–5 years after SRS.2 For these patients, salvage treatment options include resection, endovascular embolization, and repeat SRS, administered alone or in combination. In the event of failed AVM obliteration after initial SRS, complete AVM obliteration has been reported in 55%–70% of patients who underwent repeat SRS2–6 and patients who have undergone repeat radiosurgery experience hemorrhage and radiation-induced changes (RICs) at rates of 7.6% and 7.4%, respectively.7

The purpose of this study was to determine the radiological and clinical outcomes of patients managed with repeat SRS for cerebral AVM after incomplete response to prior SRS. We also identified favorable prognostic factors for obliteration and factors associated with hemorrhage and adverse radiation effects after repeat SRS. Such information may help clinicians better define the role of repeat SRS for AVM patients.

This retrospective single-center study included patients managed with repeat SRS for residual AVM after initial single-session SRS. It represents an appreciable update of our previously published analysis, with the addition of data from new patients and previously analyzed patients who received extended follow-up.4 Patients managed with volume-staged or dose-staged SRS, and those without at least 1 clinical and radiological follow-up examination after the second SRS procedure were excluded.

The patients underwent placement of the Leksell stereotactic frame under local anesthesia and monitored sedation. Children younger than 18 years underwent the procedure under general anesthesia. Stereotactic, thin-slice (1-mm-thick), T1-weighted axial contrast-enhanced and T2-weighted brain MRI, as well as biplane cerebral angiography, was then performed and data were transferred to the Gamma Knife planning system. The chosen margin dose included the entire nidus, which was defined as the arteriovenous shunt. The median (interquartile range [IQR]) margin doses at the initial and repeat SRS procedures were both 20 (5) Gy. Repeat radiosurgery was typically performed 3 to 4 years after prior SRS and administered to patients with radiological presence of persistent nidus on brain MRI or head CT and digital subtraction angiography (DSA).

The patients underwent clinical and radiological evaluations at 6-month intervals for the first 2–3 years after radiosurgery and yearly thereafter. DSA was requested when nidus obliteration was on follow-up brain MRI. AVM obliteration was defined on the basis of failure to visualize the nidus and early venous drainage on cerebral DSA. In a series of 19,826 consecutive cerebral DSA procedures, the reported incidence rate of all neurological complications was 2.63% and the incidence of all strokes resulting in permanent disability was 0.14%.8 Therefore, patients may refuse to undergo cerebral DSA at follow-up.

Brain MRI is highly effective for identifying AVM obliteration.9 In patients who refused cerebral DSA, AVM occlusion was defined on the basis of absent contrast enhancement of the nidus on T1-weighted postcontrast MRI and lack of flow voids on T2-weighted brain MRI. If residual AVM was noted on follow-up brain MRI at 3–4 years after prior radiosurgery, the patient was reevaluated and additional treatments were considered.

RICs were defined as perinidal hyperintensities on T2-weighted follow-up brain MRI.4 They were classified as asymptomatic, symptomatic if accompanied by global or focal neurological deficits in the absence of bleeding, and permanent if neurological deficits persisted after conservative management or if surgical intervention was needed.

All statistical analyses were performed with R programming in RStudio.10,11 The rates of AVM obliteration, post-SRS hemorrhage, and RIC were calculated with the Kaplan-Meier method. The log-rank test was employed to assess differences in Kaplan-Meier curves. Univariate and multivariate analyses were computed with Cox proportional hazards modeling. The assessed factors that may have affected the rates of AVM obliteration, post-SRS hemorrhage, and RIC included age (≤ 18 vs > 18 years), sex, AVM diameter (≤ 20 vs > 20 mm) and location (deep [thalamus, brainstem, basal ganglia, and corpus callosum] vs superficial), SRS parameters (margin dose, prescription volume, and 12-Gy volume), history of hemorrhage or RIC, and Spetzler-Martin (SM) grade. In this study, p < 0.05 was defined as statistically significant.

Values are shown as number (%) unless indicated otherwise.

In the interval between the first and second radiosurgery procedures, 11 patients underwent endovascular embolization of the AVM, 1 underwent resection, and 2 underwent insertion of a ventriculoperitoneal shunt for hydrocephalus after AVM hemorrhage.

Values are shown as number (%) unless indicated otherwise.

At a median of 8 months after repeat SRS, asymptomatic, symptomatic, and permanent RICs occurred at rates of 25.9%, 8.8%, and 5.3%, respectively (Fig. 2C). Symptomatic RICs occurred in 15 (8.8%) patients at a median (IQR) of 8 (6) months after repeat SRS and were permanent in 9 (5.3%) of these patients (Table 2). RIC after the first SRS procedure was the only factor that conferred increased risk of RIC after the second SRS procedure (HR 5.1, 95% CI 1.6–16.3, p = 0.006) (Table 4). All patients with symptomatic RICs were managed with a short course (generally approximately 2 weeks) of dexamethasone. Persistent symptoms occurred in 3 patients: 1 was treated with 4 months of oral dexamethasone, 1 with a single dose of bevacizumab, and 1 patient was managed with 6 months of oral dexamethasone and 4 cycles of bevacizumab.

Delayed cyst formation occurred at a median (IQR) of 66 (55) months after repeat SRS in 4 (2.4%) patients (Table 2). Delayed cysts were asymptomatic in 3 patients and were managed with observation. One patient developed hydrocephalus and was managed with ventriculoperitoneal shunt insertion.

Ten patients required a third SRS procedure, which resulted in AVM occlusion in 6 of these patients. Microsurgical resection was employed in 1 patient and resulted in AVM cure.

There was 1 previously reported case of presumed radiation-induced meningioma 12 years after SRS.12 The tumor has remained stable and asymptomatic, and it has not required any intervention.

In our study, asymptomatic, symptomatic, and permanent RICs occurred at rates of 25.9%, 8.8%, and 5.3%, respectively, at a median of 8 months after repeat radiosurgery. RIC after the first radiosurgery procedure was the only factor associated with an increased risk of RIC after repeat SRS. At our institution, a short course of oral corticosteroids is the typical initial treatment option for symptomatic RIC. Patients with persistent symptoms and patients who decline surgery after cessation of corticosteroids are managed with a more protracted course of corticosteroids. Patients who do not respond to corticosteroids and those who develop corticosteroid-related adverse effects are treated with bevacizumab. In a prior study, delayed post-SRS cysts occurred with an incidence rate of 3% at a mean latency period of 78 months, and approximately one-third of these patients were symptomatic and required surgical intervention.17 In our cohort, delayed cysts occurred in 2.4% of patients at a median of 66 months after second SRS. One patient developed cyst-associated hydrocephalus and required insertion of a cystoperitoneal shunt.

Our study was limited by its retrospective and single-center design. In addition, we reported the outcomes of patients treated at different periods with different Gamma Knife and neuroimaging technologies. Therefore, due to advancements in the Gamma Knife and radiological technologies used, in addition to our center’s increasing experience, it is likely that the patients treated at the end of the study period may have benefited the most from repeat AVM radiosurgery.

Repeat SRS results in the obliteration of residual AVM in the majority of patients and confers a low risk of complications. Smaller AVM nidus, age ≥ 18 years, and prescription dose portended increased probability of AVM obliteration after repeat SRS. The incidence rates of intracranial hemorrhage and symptomatic RIC after repeat SRS were comparable to those after initial SRS.

Illustration from Agosti et al. (E5). Used with permission of Mayo Foundation for Medical Education and Research. All rights reserved.

Sankey diagram demonstrating the distributions of the treated AVMs in terms of SM grade prior to the first and second radiosurgery procedures and at last follow-up. 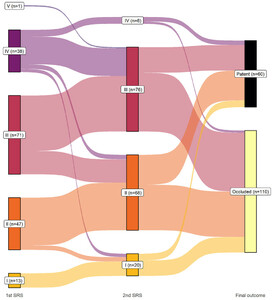 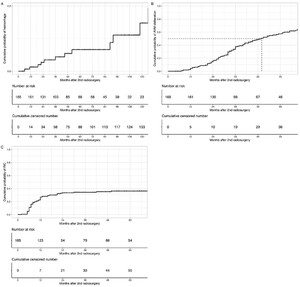