The role of an anterior approach in the treatment of ankylosing spondylitis–associated cervical fractures: a systematic review and meta-analysis

Cervical fractures in patients with ankylosing spondylitis can have devastating neurological consequences. Currently, several surgical approaches are commonly used to treat these fractures: anterior, posterior, and anterior-posterior. The relative rarity of these fractures has limited the ability of surgeons to objectively determine the merits of each. The authors present an updated systematic review and meta-analysis investigating the utility of anterior surgical approaches relative to posterior and anterior-posterior approaches.

Cervical fractures in patients with ankylosing spondylitis can have devastating neurological consequences. Currently, several surgical approaches are commonly used to treat these fractures: anterior, posterior, and anterior-posterior. The relative rarity of these fractures has limited the ability of surgeons to objectively determine the merits of each. The authors present an updated systematic review and meta-analysis investigating the utility of anterior surgical approaches relative to posterior and anterior-posterior approaches.

Ankylosing spondylitis (AS) is a seronegative autoimmune disorder characterized by inflammatory back pain and axial skeleton deformities leading to significant morbidity.1 AS is believed to have a multifactorial pathogenesis, with environment, sex, and genetic predisposition impacting susceptibility. It is typically a disease of young men, with a peak onset in the 3rd to 4th decades.2 While human leukocyte antigen–B27 (HLA-B27) remains the primary genetic association, only 5% of HLA-B27 positive patients ultimately develop AS, further highlighting the multifactorial nature of this disease.3

The bony manifestations of AS are believed to be due to progressive osteoproliferation leading to the formation of syndesmophytes. Subsequently, they cause the formation of osseous bridges in place of native connective tissue, leading to progressive kyphosis and decreased bone mineral density, making the spine susceptible to fractures even in the setting of minor trauma.4 The cervical spine is the most common site for fractures, followed by the thoracic spinal column.5,6 Early-stage AS is marked by decreased cervical bone mass, increasing the risk of cervical fracture in AS patients.7 Subsequent disease progression leads to spinal fusion, which can result in fractures adjacent to the site of fusion or at the junction of fused and mobile segments. These fractures most commonly occur between C5 and C7.8–10

Cervical fractures may have devastating consequences due to potential spinal cord injury and have the strongest correlation with hospital mortality.11 Therefore, immediate diagnosis and treatment is necessary to prevent severe neurological sequelae in this patient population. While most vertebral fractures are detected and subsequently treated, many cervical fractures are often undiagnosed because they occur in the presence of minimal forces.3 The rarity of cervical fractures due to AS, coupled with the unique structure of the AS-affected spine, has rendered the creation of formal treatment protocols difficult.12 The lack of a standard treatment regimen has created an ongoing debate among practitioners regarding the use of anterior, posterior, or circumferential approaches for fixation in patients with cervical fractures.12 Among these approaches, several studies have found that posterior approaches might be preferred over anterior approaches, although a study by Longo et al. found that combined approaches tend to be most commonly used.4,13 Thus, a systematic review of the existing literature is necessary to guide the formation of an eventual consensus on treatment of these fractures. Here, we present an updated systematic review and meta-analysis of anterior approaches for fixation of cervical fractures in patients with AS and compare their neurological improvement and complication rates with those of posterior and anterior-posterior approaches.

A systematic search of the English-language literature from July 1990, to May 20, 2021, in the PubMed, Embase, and Cochrane databases was performed. The following medical subject heading terms and free text words were used: “ankylosing spondylitis” or “cervical fracture” or “surgical repair” or “anterior approach.” A total of 130 published abstracts or manuscripts were identified. As illustrated in the PRISMA flowchart (Fig. 1), after applying the inclusion and exclusion criteria, a total of 7 articles were included in the qualitative analysis and 6 in the quantitative analysis. Selection and extraction of the studies were performed by two independent authors (V.G. and J.P.B.).

The pooled data analysis was performed with Review Manager version 5.4 (The Cochrane Collaboration). Odds ratios and 95% confidence intervals were calculated with the Mantel-Haenszel test, and forest plots were generated for each comparison. Fixed-effects dichotomous models were developed to assess the overall effect of each approach in control and treatment groups. Our primary outcome was neurological improvement. Other secondary outcomes included complication rates. Risk of bias was assessed using the Cochrane risk-of-bias tool to give further insight into the conclusions made by the authors and our own subsequent meta-analyses.

Seven articles met the inclusion criteria from an initial pool of 130 articles.14–20 All articles evaluated neurological improvement clinically. Six studies were included in the quantitative analysis. Key differences are summarized in Table 1. Six studies compared the anterior approach with both posterior and anterior-posterior approaches, while 1 study evaluated only an anterior approach. All studies measured neurological status both pre- and postoperatively. Our risk-of-bias summary is presented in Fig. 2.

Summary of included studies including primary endpoint, treatment, and follow-up

The relative rarity of AS-associated cervical fractures has led to a lack of consensus regarding the optimal surgical technique for definitive treatment. Currently, anterior, posterior, and anterior-posterior fixation are the most commonly used surgical approaches; however, the current level of evidence regarding the utility of anterior approaches remains unclear.

All included studies evaluated neurological improvement in patients who underwent surgical management of AS-related cervical fractures.14–20 Although we were unable to detect significant differences in overall rates of neurological improvement, we found that patients who underwent anterior fixation demonstrated a significantly lower mean postoperative neurological improvement relative to patients who underwent posterior or anterior-posterior fixations, as evidenced by the mean change in preoperative (MD −0.60, 95% CI −0.76 to −0.45; p < 0.00001) and postoperative (MD −0.46, 95% CI −0.60 to −0.32; p < 0.00001) Frankel grades. These findings are corroborated by Longo et al., who previously reviewed the existing literature and also demonstrated that patients who underwent anterior fixation experienced worse neurological outcomes.13 An anterior surgical approach has been reported to be efficacious in patients with cervical fractures who also had spinal cord compression and mild dislocation and did not have severe osteoporosis and/or kyphosis.21 Furthermore, patients exerting low levels of activity in the perioperative period were most amenable to treatment with an anterior surgical approach.21 Conversely, patients with severe cervical kyphosis and osteoporosis displayed poorer outcomes from an anterior approach due to difficulties in surgical exposure and subsequent fixation.21 In this case, substantial flexion stress at the fracture site can lead to instrumentation failure. Despite these obstacles, Guo et al. reported favorable results using a single anterior approach to treat cervical spinal fractures in patients with AS.21 Ninety percent of their cohort (9 of 10) who underwent anterior-only surgery with subsequent postoperative cervical immobilization achieved successful bone fusion, and none demonstrated signs of instrumentation failure. The authors attributed their successful outcomes to enhancement of the anterior fixation before fusion by postoperative cervical immobilization, immediate stability provided by anterior fixation, and a low level of activity in 70% of their patients, which decreased downward force on the construct.

Regarding postoperative complication rates, we found no significant differences between anterior fixation and other investigated approaches. Complications which have been associated with an anterior surgical approach include dysphagia, hoarseness, respiratory issues, nonunion, and graft subsidence.21 Additionally, pulmonary complications such as respiratory failure and iatrogenic pneumothorax have been associated with anterior fixation.22 However, in our study, we observed that an anterior approach trended toward lower overall complication rates. This finding is contrary to previous research that found that patients who underwent anterior fixation experienced higher rates of instrumentation failure requiring revision surgery, as noted by Longo et al.13,23,24 One National (Nationwide) Inpatient Sample (NIS) study revealed that patients who underwent anterior-posterior approaches had an extended hospital length of stay and higher rates of pulmonary complications.22 This may be related to surgeon bias in utilizing circumferential fixation in patients with worse fractures. The cause of this discrepancy is unclear but may be elucidated with larger-scale studies.

The primary limitation of our study was a lack of clinical trials investigating various approaches to surgical treatment of AS-related cervical fractures. The paucity of data on this topic is most likely a result of the relative rarity of these fractures, which has forced researchers to rely on retrospective formats to produce sufficiently large cohorts. While some studies have previously relied on the NIS to produce large data sets, the utility of NIS-based samples has been called into question, mainly as a product of their tendency to treat readmissions as separate cases, thus artificially inflating differences.25 Furthermore, even among the included articles, authors tended not to provide objective metrics regarding clinical outcomes aside from neurological improvement and complication rates.

Our systematic review and meta-analysis demonstrate the differential benefits of anterior, posterior, and anterior-posterior approaches in treatment of cervical fractures associated with AS. We have demonstrated that while anterior approaches may be associated with lower degrees of neurological improvement, they may be less likely to result in postoperative complications. However, larger studies are required to elucidate the utility of these approaches, particularly studies that investigate long-term clinical outcomes or other objective patient outcomes. 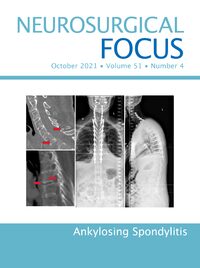 The mean frequency of each investigated approach. There were no significant differences in the mean approach rate among our included studies. 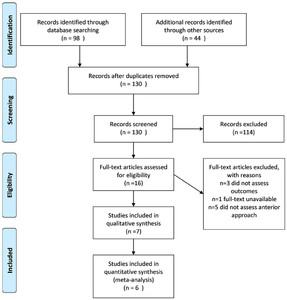 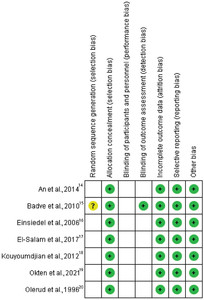 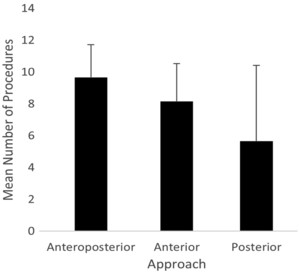 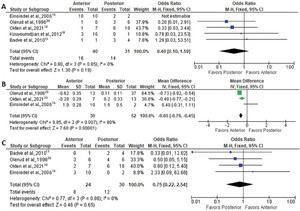 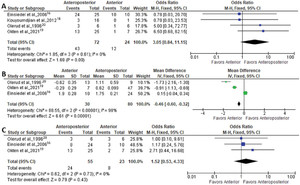