Letter to the Editor. Gender equity in academic neurosurgery: the fight must go on

TO THE EDITOR: We read with great interest the article by Taha et al.1 (Taha B, Sadda P, Winston G, et al. Increases in female academic productivity and female mentorship highlight sustained progress in previously identified neurosurgical gender disparities. Neurosurg Focus. 2021;50[3]:E3). The authors have meticulously conducted meta-analysis to understand disparities in the representation of female authorship within the neurosurgical literature and the implications for career advancement of women in neurosurgery. During this study, they included all research published between 2002 and 2019 in 16 of the top neurosurgical journals, selected by their h-index. The gender of each author was determined using automated prediction methods, and these trends were compared over time and across subdisciplines. According to the information they obtained, Taha et al. concluded that the proportion of female authors in major neurosurgical journals has steadily increased. However, the rate of female senior authorship has lagged behind the rate of first authorship, indicating a disparity in academic advancement for women in neurosurgery.1

We thank Taha et al.1 for providing this information. We highlight the authors’ evaluation of first and senior female authorship separately. They compare publication trends over time, taking into account the proportion of female neurosurgical trainers in that time frame. They begin their analysis with a general overview of the publications and then proceed to examine each journal individually. The characteristics of this study can assist with understanding the causes of this amount of female authorship, considering the female proportion in this specialty and how it has changed over the time. In the same way, the authors emphasize the importance of conducting more research on the review process used by journal editors, to know if anonymity is really maintained or if the deficiencies in this aspect of the process could be associated with gender preferences at the time of acceptance of publications, which has not been estimated so far.1

In a brief report that evaluated the Association of American Medical Colleges data from 1969 to 2018 to compare the level of female academic faculty representation for surgical specialties over the past 4 decades, it was found that the percentage of women in surgery for all specialties increased (OR 1.04, p < 0.001), but compared with general surgery, the yearly rate of percentage change increased more slowly in neurosurgery (OR 0.84, p = 0.004).2 The authors comment that the barriers associated with a lower rate of women in surgical specialties are gender stereotyping, lack of female mentors in surgery, and perceived poor work-life balance due to the fact that surgical specialties require a less flexible schedule that involves a greater amount of time.2 This is a situation that could explain the fact that female neurosurgeons have less participation in first and senior authorship, because of the great responsibility that requires.

Despite the fact that over time the participation of women in this specialty has increased, their number is still low compared to men; multiple authors have tried to argue whether this difference is due to factors such as a lower performance of women in the area. Zuluaga-Ramirez et al.,4 in their criticism of the current situation of harassment and discrimination, highlight an interesting reality: “a man surgeon is not superior to a woman surgeon in their techniques or abilities,” taking into account a cohort study conducted in Canada with 104,630 patients, in which significant statistical results were found for less mortality, less readmission, and fewer patients with complications at 30 days when treated by women.4

Considering the great capacities of women, they should not be displaced by a simple gender stigma; they deserve to be able to fulfill their dreams and to have the same opportunities as men, without limitations due to domestic tasks or undervaluation of their abilities, because there are many talented female researchers who may remain overlooked because of these prejudices. Over time, many women have had to overcome these obstacles; the last 30 years has been a period of growth in women’s participation in neurosurgery. This progress is a reflection of changing times, as well as the influence of organizations in which the objective is to reduce barriers and stimulate changes in policies to achieve gender equality, demonstrating that these interventions are important and that they influence the improvement of the specialty.5

In Latin America, an increasing percentage of students enrolling in medical schools are women, and the number of female neurosurgeons is also increasing, but the mutual support and solidarity of both genders is needed, not only between women. Only 34% of neurosurgery programs in Latin America have a mentoring program for women6—a depressing rate that demonstrates the lack of support from academic programs to promote greater female participation.

We believe that women should continue their fight, challenging themselves every day to achieve their academic and professional goals, but it is a fight that they should not endure alone. Although currently access has improved and support organizations have emerged, we must implement more strategies that promote these organizations’ growth and reduce the associated barriers, through more academic events, expanding availability through the creation of new academic neurosurgery positions, reducing the stigma perpetuated by neurosurgeon teammates and the system in general, and introducing from the schools an inclusive culture that promotes cooperative and equitable participation based on effort, performance, and responsibility, and that is not based on social prejudices.

Thank you to the authors for their letter in response to our article. These are important topics and challenges to address together as a community in order to advance progress in the diversification of our field. The mitigation of healthcare disparities requires supporting a workforce inclusive of all gender and cultural backgrounds to better serve our communities, and to bring equipoise to treatment approaches and outcomes for all patients. Taking a narrow lens to one aspect of this challenge, the academic advancement of women as reflected in publication, an important question that may bring constructive thoughts and solutions to the current gender gap is what the rates of submissions versus publications are for women versus men. This will address a necessary question as to whether there is a disparity in productivity versus acceptance rate, and will point to constructive solutions. If rates of submission and productivity are the limitations, elucidating barriers to identifying, initiating, and completing meaningful clinical studies is essential. This may include differentials in self-defined, or institutionally defined, protected academic time. This difference may be driven in part by disparities in pay grade and therefore requisite salary justification, leading to a greater focus on clinical revenue versus academic pursuits. If acceptance rate is the distinction, despite significant submission and contribution, assessing the quality of the studies submitted, or the composition of editorial and review boards introducing potential bias, is important. Additionally, whether all of the female authors identified as contributing to major neurosurgical journals are actually neurosurgeons is essential. It is possible that the disparity in academic presence is far greater than estimated if current female authors are not all from the field, or are primarily PhDs as opposed to MDs. This angle is just one of many that are important in the process of understanding and supporting diversity in our field’s academic presence and promotion. The advancement of diversification as a community must be solved by the community, not by women or underrepresented minorities in isolation. Progress and equipoise will be fostered by open communication and honest introspection as a group, with a mind for inclusion and openness as the most essential components of innovation, growth, and excellence in care for our patients and one another.

in Neurosurgical Focus
Schematic representing the concept of “Time is Brain," highlighting that timely intervention of large-vessel occlusion can lead to a complete neurological recovery. Copyright Sandeep Kandregula (artist). Published with permission. See the article by Kandregula et al. (E4). 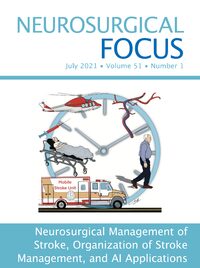