We stand at a unique point in history. Advances in computing and bioelectronics have enabled true bidirectional interactions between machines and the brain. This issue of Neurosurgical Focus explores some cutting-edge innovations at the brain-machine interface.

This collection begins with articles highlighting and reviewing recent progress in the use of brain-machine interaction to improve treatment in neurosurgical patients. In the report by Miller et al., descriptions of new electrocorticography developments for decoding movement, speech, and vision from the brain surface accompany illustrations of clinically implemented devices for quadriplegic and locked-in patients. Soldozy and colleagues present a review of the history and current state of intravascular electrodes that capture cortical activity (stentrodes) and how these devices might be implemented for brain-machine interfacing.

Looking toward the future, improvement in brain-machine interfaces will require a synthesis of neurophysiological discovery, device innovation, and optimization of interfacing technology. A new neurophysiological application of a brain-machine interface feature has been identified by Gogia et al., who used stereoelectroencephalography (SEEG) electrodes implanted for epilepsy monitoring. Their recent work shows that movement-related electrical changes (between 30 and 200 Hz) can be measured from the human amygdala. From microelectrodes embedded on SEEG leads, Wicks and colleagues have elegantly delineated CA1 and CA3 single neurons, then quantified their circuit-level interactions.

Optimization of existing technology is addressed at multiple levels in this issue. An illustration of device innovation by Price et al. details how novel neurochemical sensors, coupled with electrodes, have produced a new family of closed-loop devices. Keogh and colleagues chronicle steps to improve the mechanical qualities of the neuron-electrode interface for lasting recordings, while Lehman et al. illustrate how targeting with a combination of novel MRI sequences can optimize electrode implantation.

The brain-machine interface frontier is also expanding into the realm of psychiatric therapy, with ongoing development of systems to treat depression, obsessive-compulsive disorder, and Tourette syndrome. Wang et al. performed a pilot study of an innovation for psychiatric treatment—deep brain stimulation of the habenula for intractable schizophrenia, for which efficacy was demonstrated in one of two patients.

Two unique studies described in this issue demonstrate directional control of animal movements. Baek and colleagues have demonstrated the viability of, and developed an operative protocol for, a fully implantable brain stimulation system in pigeons. By use of this system to stimulate the ventral part of the nucleus intercollicularis and formatio reticularis medicalis mesencephalic structures, pigeons were deviated from their usual flight paths. And by electrode implantation in the nigrostriatal pathway of rats, Koh et al. were able to direct them through a maze using electrical stimulation to influence the animals’ choice of direction at intersections.

While this issue highlights some key developments at the interface of biomedical technology and artificial intelligence, rapidly evolving innovations in electrical and bioengineering, neurophysiology, and analytic algorithms will likely result in accelerated advances in this field using multimodality approaches. As demonstrated by the variety of articles in this collection, further innovations will likely lead to far-reaching benefits for individuals and society. 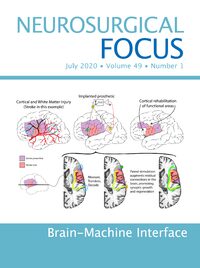