This issue of Neurosurgical Focus is devoted to pediatric functional neurosurgery, a field that encompasses treating children with medically resistant epilepsy, movement disorders, and spasticity. A key area of focus in the surgical treatment of functional disorders is neuromodulation, which is leading to increased understanding of the complex neural circuitry of the brain. The emergence of functional connectomics and the ability to perform large-scale modeling of neural networks is helping elucidate the underlying circuitry within the vagus afferent network that may be involved in vagal nerve stimulator (VNS) treatment effect and responsiveness. Hachem et al. provide us with the medical illustration of the vagus afferent network and set the stage for predicting individual patient response.

One of every 150 children is diagnosed with epilepsy in the first 10 years of life.2 The impact of this is profound, with 80% of these children having at least one comorbid medical or psychiatric disorder.1 At least 20% of these children will progress to drug-resistant epilepsy (DRE).8 Last year, the New England Journal of Medicine published the first randomized trial of epilepsy surgery for children with DRE. The results were striking—77% seizure freedom at 1 year for children randomized to (open) surgery versus 7% for those randomized to medical management on the surgery waiting list.4 This indicates that for patients with focal DRE, the gold standard for treatment is open resection aimed at localizing and excising the epileptogenic zone to achieve seizure freedom. The timing of epilepsy surgery is critical, with improved cognitive outcomes in children who have the shortest duration of epilepsy prior undergoing epilepsy surgery.5 With the youngest patients in mind, Pindrik et al. performed a systematic review of epilepsy surgery in infants and toddlers with DRE; they report favorable outcomes after epilepsy surgery in this age group. They also highlight special considerations for operating on the youngest patients, which many readers may find of interest. Resective epilepsy surgery is a viable treatment option for infants and children with DRE with epileptic spasms (ES) for which a focal epileptogenic zone can be identified. As Abel and colleagues describe, advances in PET and MEG have improved our ability to identify focal epileptogenic abnormalities and facilitate presurgical evaluation of drug-resistant ES patients. They demonstrate that resective epilepsy surgery is a viable treatment strategy for select patients with drug-resistant ES, with seizure-freedom rates as high as 88%. Akeret et al. beautifully illustrate the use of intraoperative ultrasound to define the borders of the dysplastic regions in 15 patients with DRE. The universal availability of ultrasonography compared to intraoperative MRI, coupled with the superior real-time imagery, will aid surgeons around the globe in their resections of focal cortical dysplasia.

The landscape of epilepsy surgery is evolving and we now have several novel surgical tools and techniques that aid in both the localization of the epileptogenic zone and the treatment of seizures. Stereo-electroencephalography (SEEG), aided by robotic guidance, allows for minimally invasive, extremely accurate targeting of epileptogenic foci with low rates of morbidity. In children with DRE, multiple large studies have demonstrated accurate seizure localization, which facilitates resection, with up to 75% of children achieving seizure freedom.7 Ho et al. elaborate on the surgical techniques and current use of SEEG in children to define subcortical, deep, and/or bilateral epileptogenic zones.

Beyond open resection, MR-guided laser interstitial therapy (MRgLITT) is an emerging technology that is transforming the minimally invasive surgical management of DRE. A wide variety of epileptogenic lesions have now been treated, including mesial temporal sclerosis, hypothalamic hamartomas, periventricular nodular heterotopias, cortical dysplasia, and low-grade gliomas, with seizure freedom achieved in 40%–60% of patients.3,6 Tovar-Spinoza et al. guide us through patient selection and technique and present the largest series of MRgLITT for cortical tubers in children with DRE, reporting seizure freedom in 43% of patients. Combining the two modalities of SEEG and MgLITT to allow children to undergo minimally invasive surgery in a single or staged surgery will undoubtedly improve seizure control while reducing morbidity and costs. Cobourn et al. provide us with a treatment paradigm for SEEG and MgLITT along with their early experience with 4 cases.

Similarly, technological advances in imaging and intraoperative technique are advancing the application of deep brain stimulation (DBS) in children. Early promising results are inspiring research into other indications. Davidson et al. outline some of the key ethical issues differences in implementing DBS in the pediatric population, as well as an ethical framework to guide neurosurgeons when considering DBS for accepted or experimental indications. 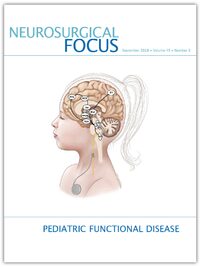