Posttraumatic stress disorder (PTSD) is an anxiety disorder resulting in functional impairment as a result of exposure to threatened or actual death, serious injury, or sexual violence. The traumatic event is persistently re-experienced with intrusions of thoughts, feelings, or reminders, with associated excessive emotional arousal including hypervigilance, difficulty concentrating, and irritability.8 Individuals affected with the disorder often socially isolate themselves to avoid trauma-related stimuli, and frequently have concomitant depression. Historically, PTSD treatments have consisted of cognitive behavioral therapy, exposure therapy, and pharmacological treatment with SSRIs (selective serotonin reuptake inhibitors) and SNRIs (serotonin–norepinephrine reuptake inhibitors). Lifetime prevalence of the disorder is as high as 7% in the United States.1 Combat veterans are classically at high risk for PTSD, with a 15% prevalence in male Vietnam-era veterans.10 Although significant advances have been made in the cognitive and pharmaceutical therapies for PTSD, in a subset of the population the disorder remains refractory to treatment. Refractory PTSD is probably partially due to lack of fear extinction, rendering exposure therapy ineffective.11 Fear extinction is modulated by the basolateral nucleus (BLn) of the amygdala and the medial prefrontal cortex, the former of which demonstrates amplified blood flow and metabolism on functional imaging in refractory PTSD.4,5 This poses a unique treatment challenge for which electrical neuromodulation may be particularly well suited.12

The BLn of the amygdala is hypothesized to be an effective target for deep brain stimulation (DBS) for PTSD because it serves as a mediator for emotional and autonomic responses to stimuli in the environment. The BLn is a relay station within the amygdala, connecting the lateral nucleus with the central nucleus and ultimately forming a feedback loop with the medial prefrontal cortex.7 Extinction cells and fear-encoding cells are located within the BLn. When a sensory stimulus is applied, the relative activity of “fear” cells to “extinction” cells determines the individual’s ultimate behavioral response.10 Modulating the BLn to enhance extinction while mitigating fear could reduce the emotional arousal associated with stimuli conditioned to the index traumatic event. Functional imaging studies have demonstrated that individuals with PTSD have hyperactivity in the amygdala, particularly within the basal portion, compared to controls.5 The intensity of such hyperactivity appears linked to the magnitude of symptoms.2 It is hypothesized that as with other psychiatric conditions characterized by hyperactive networks, such as depression and obsessive-compulsive disorder, DBS applied to the hyperactive amygdala could moderate function in connected regions, thereby suppressing symptoms of PTSD.

In their paper titled “Bilateral amygdala stimulation reduces avoidance behavior in a predator scent posttraumatic stress disorder model,” Dengler et al. outline their trial of bilateral basolateral amygdala DBS in a rodent PTSD model.6 Previous DBS studies in animals with PTSD have used an aversive conditioning model whereby a foot shock stimulus is paired with an object placed in the environmental chamber at the same time as the shock. The rats, when exposed again to the innocuous object, will bury it in an attempt to avoid the shock stimulus. The study’s authors argue that the predator scent model, in which the rodent is exposed to a life-threatening, stress-inducing stimulus without direct physical repercussion, is perhaps more in line with the types of cues that humans encounter in a situation leading to PTSD. The scent model produces prolonged anxiety and avoidance behaviors, in contrast to the relatively short-acting effects of the aforementioned aversive conditioning model.

In the aforementioned study, rats were assigned to one of four conditions: bilateral stimulation, unilateral stimulation, no stimulation, and no stimulation/no exposure to the predator scent. Stimulation was applied for 4 hours a day for 1 week prior to animals undergoing repeat behavioral testing. Electrode placement was validated with postmortem histological investigation. The study demonstrated that bilateral high-frequency stimulation resulted in decreased avoidance behavior compared to the no-stimulation cohort. Interestingly, the stimulation cohort did not demonstrate decreased anxiety, as measured by the lack of a significant change in time spent on the open arm portion of the elevated plus maze. One shortcoming of the authors’ study is the lack of control to negate the potential influence of a lesion effect. A separate condition of predator scent exposure without implantation should be tested. In human studies, damage to the amygdala has been shown to have a protective effect from PTSD, thereby highlighting the importance of ensuring that the effects noted in the study are not in part from implantation alone.

As DBS indications continue to mature beyond movement disorders into the realm of psychiatric and cognitive disorders, the need for careful selection of anatomical targets, development of stringent implant criteria, and a consensus of ethical considerations will become critically important. Well-designed preclinical studies are helpful in narrowing the vast array of plausible anatomical targets. Given the promising results, already there are groups that have extended DBS for PTSD beyond animal models. Langevin et al. implanted bilateral BLn DBS electrodes in a 48-year-old combat veteran with severe, refractory PTSD.11 After 8 months of continuous stimulation, he had experienced a 38% decrease in his clinician-administered PTSD (CAPS) score, which is a measure of PTSD severity. The results from this initial subject led to the launch of a Phase I pilot study investigating bilateral BLn DBS for 6 combat veterans with refractory PTSD.8,9 For those with refractory PTSD, DBS may offer not only a life-modifying therapy, but in fact a life-saving one. 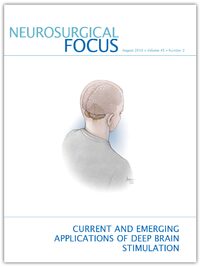