Editorial: Should endoscopic endonasal surgery be used in the treatment of olfactory groove meningiomas?

There is no doubt that for certain tumors in specific locations the expanded endoscopic endonasal approach (EEA), when performed by experienced hands, offers significant advantages over alternative transcranial approaches. However, for which tumors and in which locations these advantages accrue is certainly debatable. One of the more controversial areas in this discussion is the resection of olfactory groove meningiomas. Koutourousiou et al.3 provide an outstanding addition to this evergrowing area of the literature with their series of 50 cases, the largest single series reported to date. However, their own data may lead other investigators to altogether different conclusions than the ones they themselves draw from the same data.

Within this well-written and well-documented paper are several facts that are not highlighted by the authors but that are clearly apparent. First is the issue of repeat operations. The authors used 2 surgeries, or a staged approach, almost 40% of the time to achieve the rate of gross-total resection (GTR) reported in their paper. Generally this second surgery was another endonasal approach, which was required to remove additional tumor that was not removed at the first surgery. Why there was a need for staged surgeries so frequently is never addressed by the authors. In addition, a second surgery was used to close a postoperative CSF leak in another 30% of patients. Altogether, roughly 70% of patients required 2 surgeries rather than a single surgery. The second issue is that of complications. Although mortality was low, if all complications are added together the overall complication rate was 90%. Moreover, the average length of surgery was 9 hours, and the average length of stay was 11 days. Perhaps such long operating times were the reason for staging the surgeries. One wonders at the combined length of the 2 components of the multistage surgery added together to remove a single tumor—i.e., operating time per patient, rather than per surgery.

In spite of these numbers, the authors state in their discussion that the potential advantages of the endonasal approach over craniotomy are “fast recovery, […] shorter surgical time, and shorter hospital stay.” However, the duration of surgery and length of stay following craniotomy for olfactory groove meningiomas is never mentioned for comparison. Likewise, the overall complication rates for craniotomy compared with their series are never fully discussed. If the authors were to examine the costs devoted to each patient who underwent 2 surgeries, given the length of the operations, length of stay, and complication rates, the transcranial approaches may in fact come out on top (no pun intended). Moreover, the rate of GTR for EEA in patients with tumors > 40 mm is < 50%. With adequate time most of these patients will experience recurrence and require further treatment and subsequently additional costs. In a recent review of the literature, Komotar et al. showed that for olfactory groove meningiomas, the EEA results in inferior extent of resection rates, with higher complication rates compared with the transcranial approaches.2 Indeed, open transcranial approaches resulted in GTR in an average of 92.8% of cases.

The other key factor in assessing treatment for olfactory groove meningiomas is loss of olfaction. The EEA results in loss of olfaction in 100% of cases. As most clinicians can attest, loss of olfaction also impacts taste, and patients complain bitterly (pun intended this time) about the loss of taste, particularly when it had been intact preoperatively. In the Komotar review, loss of olfaction following a transcranial approach was only reported in 8.8% of cases, which is probably an under representation of the actual rate, but it is undoubtedly much lower than what occurs following an EEA.2 Nevertheless, there is clearly a size range of olfactory groove meningiomas, namely the smaller ones, in which olfaction can successfully be preserved after a craniotomy. Thus, for small tumors in patients with intact preoperative olfaction, a transcranial approach may be preferable, specifically to preserve olfaction, which is universally lost following an EEA. Ironically, in the discussion the authors state that potential loss of olfaction is a limitation of the craniotomy approach, which is a peculiar criticism coming from the perspective of the endonasal approach.

What about the larger tumors, namely those > 40 mm? In these tumors, the rates of GTR following EEA are low (< 50%). In these same cases, the rates of CSF leakage are highest, due to larger bone openings and inadequate nasoseptal flap coverage. These are the tumors that are mostly likely to extend laterally to the orbital rim and up anteriorly toward the back wall of the frontal sinus. Anatomically these are the most problematic areas for the EEA, not only for achieving GTR but also for controlling postoperative CSF leakage. Hence, these larger tumors are also preferably removed via a transcranial approach. It would be useful to know how far the tumors in the series reported by Koutourousiou et al. were from the back wall of the frontal sinus and how far laterally past the lamina papyracea the tumors extended, and whether these factors correlated with extent of resection. It would not be surprising if these factors were extremely important in predicting outcome. Such information would be useful to help practitioners select appropriate cases for the EEA. Likewise, the authors do not describe if a Draf III (modified Lothrop procedure) is used in every case and whether it is necessary for all olfactory groove meningiomas. Not surprisingly, the most common location for residual tumor was lateral, over the orbital roof and anteriorly along the falx, precisely the areas that are hard to reach through an EEA. Instead of location, the authors use factors like the presence of a cortical cuff as an indication that some tumors may be difficult to remove. In our experience, the presence of a cortical cuff is not predictive, because most meningiomas do not have a cortical cuff, particularly those arising from the planum sphenoidale and tuberculum sellae, where extent of resection is highest and CSF leakage lowest.1,4

The other issue not well addressed by Koutourousiou et al.’s paper is the percentage of patients during the same time period who underwent a craniotomy for an olfactory groove meningioma.3 Were any patients selected for a craniotomy or did the authors offer an endonasal approach to every patient with an olfactory groove meningioma? Do their data support this decision or should certain cases be selected for an EEA, whereas others might be better served by a transcranial approach? Are any patients excluded from consideration for the EEA? It has been our experience that the increasing success of endonasal endoscopic surgery (EES) for anterior skull base pathological entities is as much a function of mature and careful case selection as advances in technique and instrumentation.1 For this reason we no longer offer EES to most patients with olfactory groove meningioma, but prefer the supraorbital eyebrow incision and a minicraniotomy with orbital osteotomy performed using endoscopic assistance to see the anterior falx and down into the cribriform plate (Banu et al., unpublished data, 2014).

So, to answer the question posed in the title: the answer is “yes, ” the EEA is suitable for some olfactory groove meningiomas, but in only about 20% of cases: namely, those cases in which tumors are large enough that olfaction cannot be preserved but small enough that a GTR and a CSF leak rate of < 5% can be achieved in a single surgery. This includes tumors in the 30- to 40-mm-diameter “sweet spot.” Also, the endonasal approach should be strongly considered for those tumors of the appropriate size that extend into the nasal sinuses, in which there is risk that a craniotomy may leave residual tumor behind. Ultimately, appropriate and careful case selection is the most critical factor in the successful application of the EEA. Using the same approach on every tumor in every patient who walks in the door will probably lead to suboptimal results.

See the corresponding article in this issue (E8). 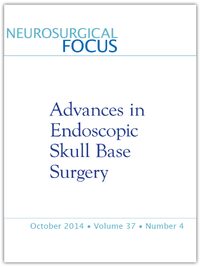